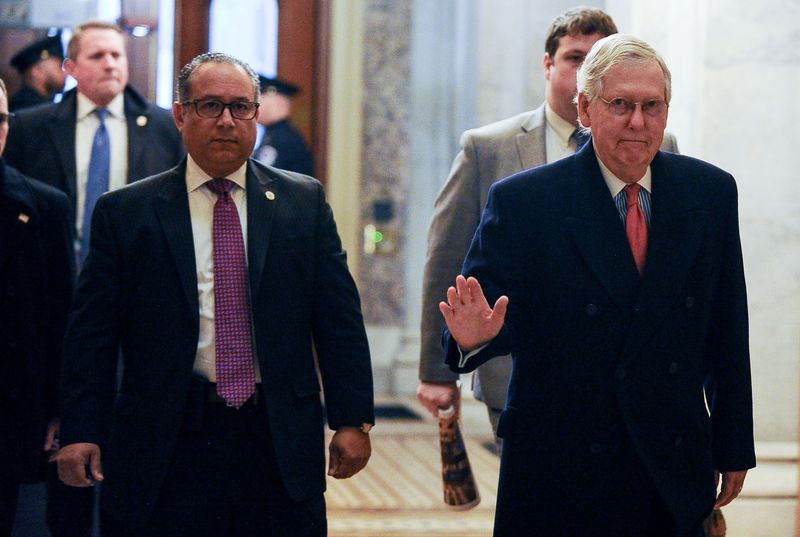 By Susan Cornwell and Makini Brice

WASHINGTON (Reuters) - Lawyers for President Donald Trump were set on Tuesday to wrap up their arguments in his U.S. impeachment trial as the Senate's top Democrat rejected a Republican proposal to make former national security adviser John Bolton's explosive unpublished book manuscript available to senators on a classified basis.

Trump's lawyers made the case to the Senate on Monday that the Republican president's actions as described in Bolton's manuscript - even if true - do not represent an impeachable offense. Trump's legal team was due to deliver its third and final day of arguments urging his acquittal starting at around 1 p.m. (1800 GMT). A source close to the team said the lawyers will wrap up in around two to 2-1/2 hours.

Directly contradicting Trump's account of events, Bolton in the manuscript said the president told him he wanted to freeze $391 million in security aid to Ukraine until Kiev pursued investigations into Democrats including Democratic political rival Joe Biden, and his son Hunter Biden, the New York Times reported.

Bolton's allegations go to the heart of impeachment charges against Trump. Democrats have said Trump abused his power by using the security aid - passed by Congress to help Ukraine battle Russia-backed separatists - as leverage to get a foreign power to smear a political rival.

Trump is seeking re-election on Nov. 3. Biden is a leading candidate for the Democratic nomination to face Trump.

The trial will determine whether Trump is removed from office after being impeached by the Democratic-led House of Representatives last month on charges of abuse of power and obstruction of Congress arising from his conduct toward Ukraine.

Trump is expected to be acquitted in the 100-seat Senate, where Republicans hold 53 seats and a two-thirds majority is needed to remove him from office under the U.S. Constitution.

Senate Republicans, who have so far refused to allow any witnesses or new evidence in the trial, faced mounting pressure from Democrats and some moderates in their own party to summon Bolton.

Republican Senator Lindsey Graham, a close Trump ally who was at the White House on Tuesday morning, wrote on Twitter that he supports making Bolton's manuscript available on a classified basis, stopping short of having the former aide testify in the trial.

"What an absurd proposal. It's a book," top Senate Democrat Chuck Schumer told reporters about the proposal floated by Graham and fellow Republican Senator James Lankford, saying there was no need to read the manuscript in a classified setting "unless you want to hide something."

Schumer made a fresh appeal for four Republican senators - the number needed for a majority - to join Democrats in voting to call witnesses. Schumer also indicated Democrats would reject any effort at a so-called witness swap with Republicans.

Lankford late on Monday urged Bolton to speak publicly outside of the impeachment trial.

"John Bolton is no shrinking violet," Lankford said in a video posted to his Facebook (NASDAQ:FB) page. "My encouragement would be: If John Bolton's got something to say, there's plenty of microphones all over the country - that he should step forward and start talking about it right now."

Alan Dershowitz, a constitutional law professor who is a member of Trump's legal team, told the Senate on Monday: "Nothing in the Bolton revelations, even if true, would rise to the level of an abuse of power or an impeachable offense. That is clear from the history. That is clear from the language of the Constitution. You cannot turn conduct that is not impeachable into impeachable conduct simply by using words like 'quid pro quo' and 'personal benefit.'"

Trump has denied telling Bolton he sought to use the Ukraine aid as leverage to get Kiev to investigate the Bidens. He has denied any quid pro quo - a Latin term meaning a favor for a favor - in his dealings with Ukraine.

The Senate may resolve the issue of whether to call witnesses in a vote on Friday or Saturday. Some moderate Republican senators, including Mitt Romney and Susan Collins, said the disclosures were likely to sway at least four Republicans to call Bolton to testify, which would give Democrats the votes necessary in the Republican-led Senate to summon him.

The focus was on whether two other moderate Republicans, Lamar Alexander and Lisa Murkowski, would vote to hear from Bolton.

Romney told Reuters on Tuesday that the idea of a "one-for-one" witness deal, with one witness called by Democrats and one by Republicans, "has merit," but added: "I wouldn't suggest any particular names."

It was not clear when senators would begin submitting their questions to U.S. Chief Justice John Roberts, the next step in the trial. Roberts is presiding over the trial.