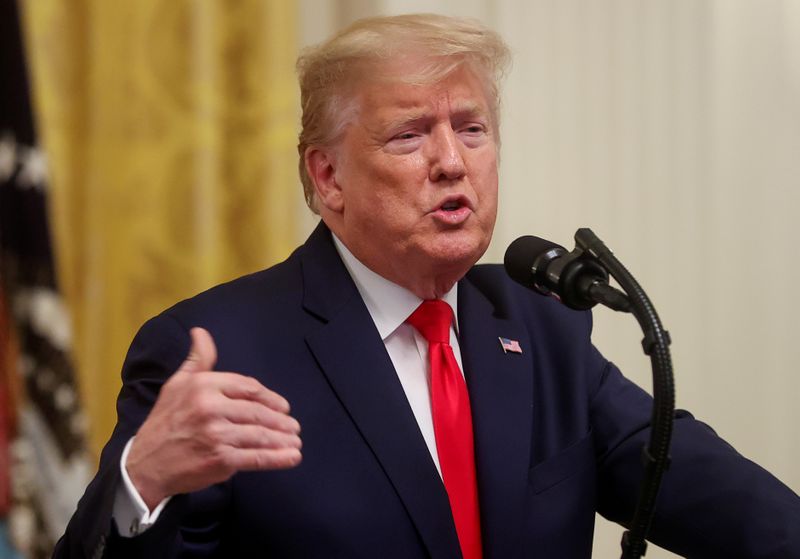 WASHINGTON (Reuters) - U.S. President Donald Trump said on Sunday that the Democratic lawmaker leading the impeachment case against him, Representative Adam Schiff, has "not paid the price, yet" for his actions, a statement Schiff said he viewed as a threat.

The vitriol from Trump against Schiff and other Democrats followed three days of their arguments in his impeachment trial before the U.S. Senate on charges he abused the power of his office by pressuring Ukraine to investigate a political rival, and then tried to obstruct an investigation by Congress.

"Shifty Adam Schiff is a CORRUPT POLITICIAN, and probably a very sick man. He has not paid the price, yet, for what he has done to our Country!" Trump said on Twitter.

Asked on NBC's "Meet the Press" if he took the Republican president's social media post as a threat, Schiff said, "I think it's intended to be."

As lead impeachment manager, Schiff, chairman of the House Intelligence Committee, played a central role in Democrats' efforts to paint Trump's behavior as dangerous to democracy the Republican-led Senate, where Trump is likely to be acquitted.

While some Republican senators said Schiff had been effective, most appeared unswayed. The lawmaker from California, a former federal prosecutor, has been a regular target of attack from Trump and Trump's Republican supporters in Congress.

Schiff said on NBC he was making the argument "that it's going to require moral courage to stand up to this president."

"This is a wrathful and vindictive president," he said. "I don't think that there's any doubt about it and if you think there is, look at the president's tweets about me today, saying that I should pay a price."

Trump regularly levels personal attacks against political opponents. His broadsides against Schiff have included "pencil neck" and "liddle." Critics accuse Trump of using an anti-Semitic trope in referring to the Jewish lawmaker as "shifty."

The White House did not respond to a request for comment on Trump's Twitter post. Representatives for Schiff said they had nothing to add to the congressman's comments.

White House spokeswoman Stephanie Grisham told Fox News Channel she had not spoken to Trump about the tweet but, "I think he means he hasn't yet paid the price with the voters."

"I don't think the president is trying to be able to do a death threat here or do some sort of intimidation," he said on CNN's "State of the Union." "Both of them are saying the American people will speak on this."

Another House impeachment manager, Democrat Zoe Lofgren, told CNN Trump should "get a grip" and be more presidential. "The president has a tendency to say things that seem threatening to people," she said.

Trump's team of lawyers began their defense on Saturday, arguing Democrats' efforts to remove the president from office would set a "very, very dangerous" precedent in an election year.

Alan Dershowitz, a member of Trump's legal team, told "Fox News Sunday" the charges against Trump - abuse of power and obstruction of Congress - were not impeachable offenses, which he said must be a crime under existing law.

That point has been disputed by legal scholars and Dershowitz himself argued the opposite view during the 1998 impeachment trial of Democratic President Bill Clinton.

On "Fox News Sunday," Dershowitz was shown a video of his comments at that time: "It certainly doesn't have to be a crime. If you have somebody who completely corrupts the office of president and who abuses trust and who poses great danger to our liberty, you don't need technical crime."

Dershowitz replied that he has done extensive research since then and has concluded that "no, it has to be a crime."