Home World News Trump said no US troops were hurt in the Iran strike. The number is now up to 34.

Trump said no US troops were hurt in the Iran strike. The number is now up to 34. 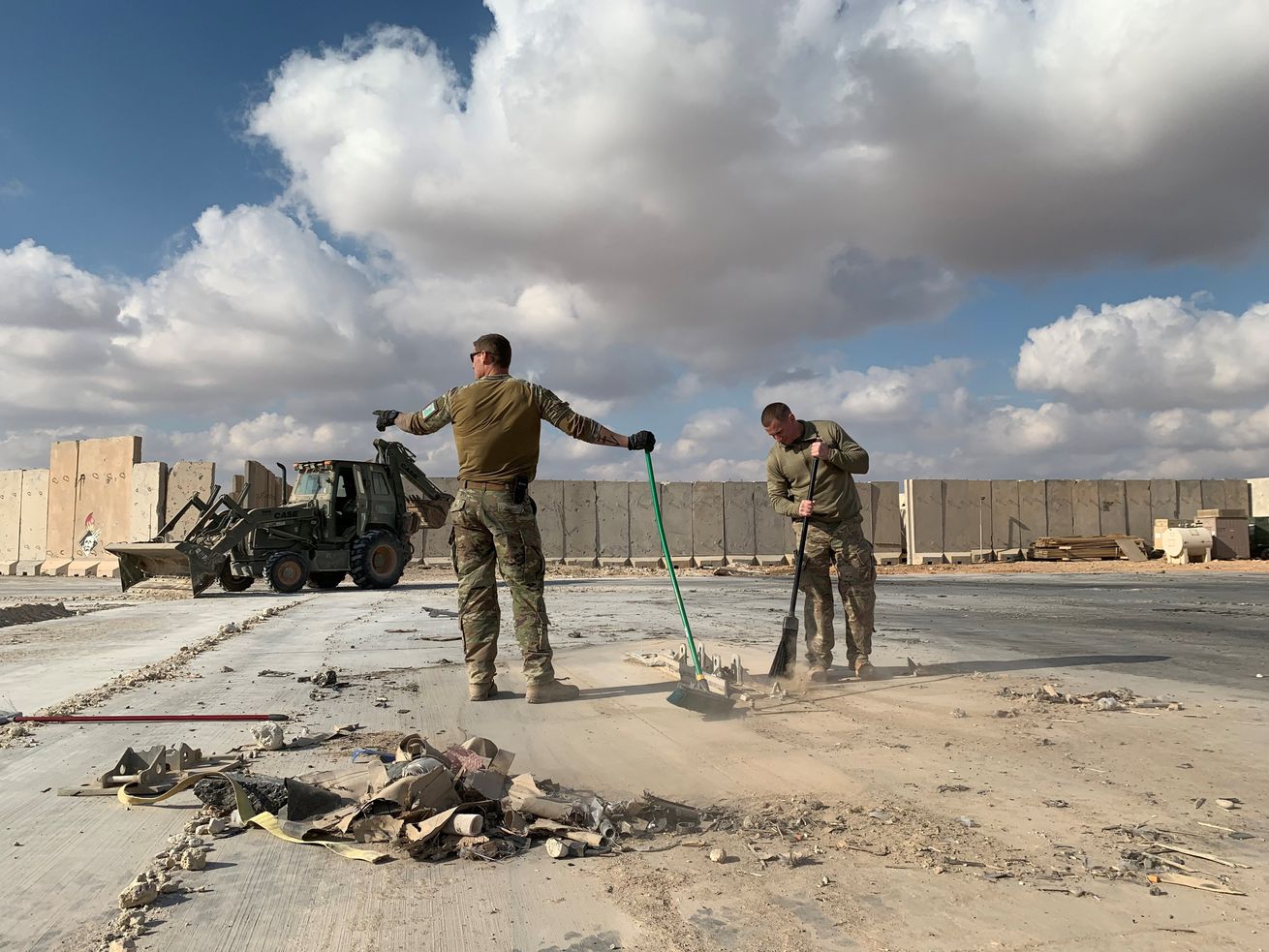 A picture taken on January 13, 2020, during a press tour organized by the US-led coalition fighting the remnants of the Islamic State group, shows US soldiers clearing rubble at Ain al-Asad military airbase. | Ayman Henna/AFP via Getty Images

The number of US troops injured in Iran’s attack earlier this month is now three times higher than the Trump administration had previously claimed, according to new information released by the Pentagon.

In a press briefing on Friday, Defense Department spokesperson Jonathan Hoffman told reporters that 34 US military members received concussions or other traumatic brain injuries (TBI) in the missile strikes Iran launched at US military targets in Iraq on January 8.

Eight of those service members who were transferred to Germany for further evaluation arrived in the US this morning to continue receiving treatment; another nine are still being evaluated in Germany. Further, 17 people diagnosed with concussions or TBI are now in Iraq and back on duty.

Importantly, it still looks like no US or Iraqi military members died in the assault; the number of Iraqi injured is still unclear.

But 34 injured US military members is a very different number from what President Trump initially told the nation during his January 8 address at the White House: “We suffered no casualties, all of our soldiers are safe, and only minimal damage was sustained at our military bases.”

And 34 injured US military members is certainly a grimmer picture of the consequences of the strike than the picture Trump painted when he tweeted “All is well!” just a few hours after the attack (though he did note that the number of casualties was still being assessed).

The fact that the true human toll of the Iran strike has taken this long to come out — and has changed several times — is yet another example of how the Trump administration has bungled the public messaging around the US-Iran crisis.

“The press and public should not have had to wait more than 2 weeks for these details to be released, even if it had to be done incrementally as medical evaluations progressed,” David Lapan, a former Pentagon spokesperson, tweeted after the Pentagon’s statement Friday. “Actions like these only create more distrust.”

From “no casualties” to 34 injuries

Trump’s announcement that there were no casualties in the Iran strike led many to speculate — at least initially — that Iran had purposely tried to avoid killing or injuring anyone to try to limit the potential US response.

Eventually, a spokesperson for US Central Command came out last week and admitted that 11 service members had sustained injuries in the Iran strikes, saying in a statement that the troops were “treated for concussion symptoms from the blast and are still being assessed” in Germany and Kuwait.

On Tuesday — almost two weeks after Trump and other officials had said no one was hurt — another Defense Department spokesperson said that “additional service members” had been “identified as having potential injuries” and were under evaluation in Germany, too, though she declined to give a specific number.

Asked the next day about the newly disclosed injuries, the president minimized the injuries, calling them mere “headaches.”

“I’ve seen what Iran has done with roadside bombs to our troops. I’ve seen people with no legs and no arms. I’ve seen people that were horribly, horribly injured,” Trump said on Wednesday in Davos, Switzerland. “I don’t consider them very serious injuries relative to other injuries that I’ve seen.”

On Friday morning, Secretary of Defense Mark Esper dodged a question about just how many US troops were hurt in the Iran attack. “We’re fully committed to being transparent about what happens, but we need to make sure we’re accurate and that we categorize things properly,” he told a Washington audience at the Center for Strategic and International Studies think tank.

Just over two hours later, the Pentagon announced that the number had grown to 34.

Of course, it’s possible that the Defense Department just didn’t recognize the extent of the brain injuries earlier, and it can take time to go through evaluations. Damage to the brain is a lot harder to spot than, say, a damaged limb or even a fatality.

“It is unsurprising that it may not be until a few days after an attack like this that troops are diagnosed with TBI,” Paul Scharre, a military expert at the Center for a New American Security, tweeted Friday. “The fact that troops have been diagnosed so quickly (within days) and that they are getting medical care is a huge, huge win for how DoD treats TBI and a major shift from 15 years ago, when troops went undiagnosed for months or years.”

Still, that’s little excuse for the Trump administration to confidently assert that there were no injuries to then weeks later say there were over 30 of them. There’s a chance, then, that more troops are hurt and either the Pentagon doesn’t know about them, or they haven’t told the American people yet.

Either way, this is about as clumsy as it gets.