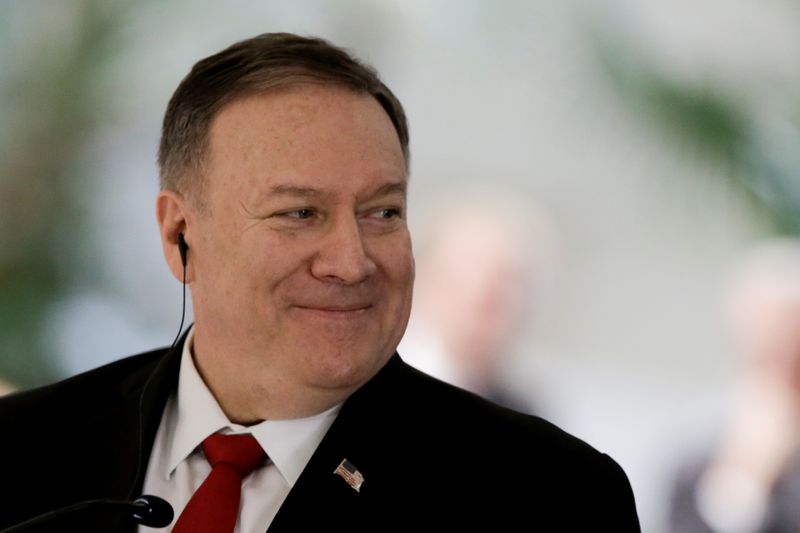 WASHINGTON (Reuters) - U.S. President Donald Trump on Tuesday praised Secretary of State Mike Pompeo for his handling of a National Public Radio reporter who Pompeo shouted at, cursed, and called a liar after a contentious interview.

"That reporter couldn't have done too good a job on you yesterday," Trump said to Pompeo, the chief U.S. diplomat, during a presentation of his Middle East peace plan, prompting laughter from the crowd of officials and dignitaries gathered at the White House.

"I think you did a good job on her actually," he added.

Pompeo was interviewed on Friday by NPR reporter Mary Louise Kelly, and was asked repeatedly about Ukraine and how he had supported ousted U.S. Ambassador Marie Yovanovitch to Kiev during a testy nine-minute exchange.

Following the interview, Kelly said that Pompeo cursed at her and asked her: "Do you think Americans care about Ukraine?"

NPR is a non-profit media organization that broadcasts through over 1,000 member radio stations in the United States. It says it receives about 2% of its revenue from federal funding; its member stations often rely on state and federal grants.

In a statement https://www.state.gov/statement-by-secretary-michael-r-pompeo on Saturday, Pompeo said the reporter had lied in setting up the interview and in agreeing to conduct the post-interview conversation off the record. His statement did not dispute what she said about the content of the post-interview encounter.

Kelly said Pompeo's staff did not stipulate that the post-interview meeting was to be off the record.

The U.S. State Department on Monday removed another NPR reporter from the press pool for Pompeo's upcoming foreign trip, a move the State Department Correspondents' Association (SDCA) said was retaliation for the colleague's interview.

He added, "We have also asked what it means for future trips."

The White House Correspondents' Association on Tuesday called for the State Department to reverse what it called an "ill-conceived decision" to bar the NPR reporter from the upcoming trip.

"The State Department's apparent attempt to take punitive action against a news outlet for its reporting is outrageous and contrary to American values," Jonathan Karl, president of the association, said in a statement.

The State Department did not immediately respond to a request for comment.