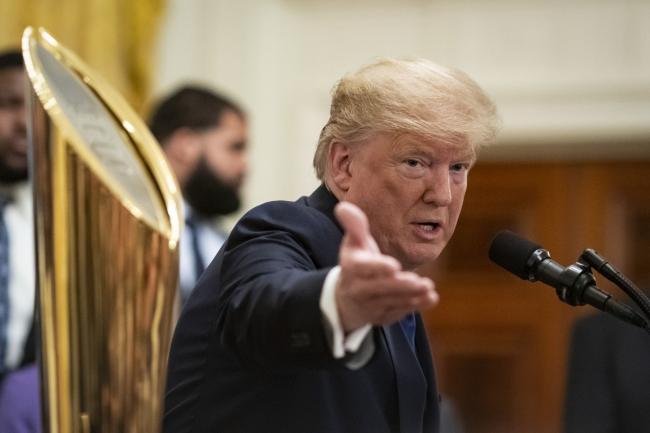 (Bloomberg) -- President Donald Trump’s impeachment trial formally opens in the Senate on Tuesday, promising to shape his legacy, deepen the country’s political divisions and influence control of power in the nation’s capital for years to come.

While the president faces little risk of removal from office by the Republican-led Senate, the trial may bring to life new details of Trump’s Ukraine scandal and help sway undecided voters in the 2020 elections.

The nationally televised proceedings will be aimed at voters who will decide in November whether to reward Trump with a second term, and determine which party should control the House and Senate. The conduct of both Democratic and Republican senators -- who will be forced to remain in the chamber during the sessions and abide by strict rules -- will be under a microscope.

Senate Majority Leader Mitch McConnell proposed rules for the trial on Monday that could bring it to a conclusion within days, with much of the action taking place out of public view or in the dead of night.

Trump was attending the World Economic Forum conference in Davos, Switzerland, as the trial was set to start on Tuesday, where he gave a speech seeking to take credit for an economic boom in the U.S. and taking a swipe at environmental “alarmists.” His speech came as business and political leaders gathering in the Swiss resort town listed climate change as among their top five long-term concerns.

Trump is heading into impeachment with weakened public support, despite having one of the strongest economies in years. Head-to-head national polling shows former Vice President Joe Biden, the president’s top rival, consistently beating Trump in the popular vote. And a survey by CNN released on the eve of the trial showed that a majority of Americans -- 51% -- support the Senate voting to remove the president from office.

The trial could shift those numbers and carries the potential for unpredictability, as Democrats may win enough support from moderate GOP senators to call witnesses. If that happens, top administration officials with potentially damaging information -- such as former National Security Adviser John Bolton -- could speak publicly for the first time, provided Trump doesn’t block them by invoking executive privilege.

New documents could also emerge that provide details on Trump’s effort to force Ukraine to investigate Biden and his son Hunter. But McConnell is trying to keep a tight grip on how the trial unfolds and has said he wants it over in a matter of weeks.

On Monday, McConnell revealed his proposed rules for the trial, giving House managers just two days to prosecute their case against the president. It’s an accelerated pace compared to President Bill Clinton’s 1999 trial that betrays Republicans’ eagerness to end the impeachment saga. The compressed timeline could mean that some of the prosecution is conducted late at night, when few Americans will be tuned in.

McConnell also plans to put off the question of witnesses until after both sides present their case and answer senators’ questions. The White House would be able to seek a quick dismissal of the two articles of impeachment soon after the trial rules are adopted.

White House Press Secretary Stephanie Grisham announced late Monday that eight Republican members of the House who aggressively attacked the impeachment inquiry would join his defense team. Their duties aren’t clear, but defending the president in the media is likely foremost among them.

The first battle -- likely to take place out of public view -- will be over Democrats’ amendments to the trial rules.

Under decades-old Senate impeachment trial rules, all debate will be in secret -- barring the unlikely success of a Democratic bid to open it to the public. So Americans will see only the roll-call votes on amendments and McConnell’s resolution on trial rules.

Assuming McConnell’s rules are adopted, both House managers and Trump’s defense will be given 24 hours of floor time split over two days before senators can submit questions. After that, the Senate could vote to hear from witnesses or move swiftly to final deliberations before declaring Trump guilty or not guilty.

Senators will have to conduct themselves far differently than they’re accustomed. They have been told that once the trial starts, they must stay seated at their desks with only reading material related to the case and to avoid talking in the chamber. Their telephones and other electronics will be kept out-of-reach in cubbies.

Republicans are eager to acquit the president and expose what they describe as a partisan and legally dubious effort undertaken by those unwilling to accept a Trump presidency.

Democrats will seek to highlight what they see as damaging documents and testimony while arguing that the president’s efforts to solicit a foreign investigation into his political rival should disqualify him from office.

The biggest unknown is whether the Senate will hear testimony. Democrats’ demands for witnesses intensified after a media blitz last week by Lev Parnas, a former associate of Rudy Giuliani, Trump’s personal lawyer.

Parnas, who is facing indictment on federal campaign finance charges, told MSNBC that he informed Ukraine officials their U.S. military aid was contingent on announcing an investigation into the Bidens. “I wouldn’t do anything without the consent of Rudy Giuliani or the president,” Parnas said in the MSNBC interview.

Even before Parnas’s interview, GOP Senator Lamar Alexander of Tennessee on Tuesday joined Republicans Susan Collins of Maine, Lisa Murkowski of Alaska and Mitt Romney of Utah in saying they wanted at least an opportunity to vote on calling witnesses in the trial. Four Republican votes would be enough to force the issue, since Democrats fully back calling witnesses.

Despite the possibility of testimony, the Senate’s Republican majority limits the risk faced by Trump over proceedings that so far have been overseen by House Democrats eager to inflict maximum political damage. Some 20 Republicans would have to defect for Trump to face removal from office, underscoring the virtual certainty of his acquittal.

Trump, who remains deeply popular with his core voters and deeply loathed by Democrats, is trying to win re-election by stoking his supporters’ sense of grievance and oppression while painting Democrats as unhinged and willing to attack him at all costs.

Democrats, too, see the trial as a chance to cement public opinion against the president, and in a pair of pre-trial briefs filed over the holiday weekend, both sides seemed as interested in swaying voters as the Senate.

In a 171-page filing on Monday, Trump’s lawyers argued the articles of impeachment were “a brazenly political act” resulting from a “rigged process” that “debase the grave power of impeachment and disdain the solemn responsibility that power entails.” House impeachment managers said in their filing that their chamber “amassed overwhelming evidence” of the president’s guilt “through fair procedures rooted firmly in the Constitution and precedent.”

Outside the impeachment proceedings, Trump sees reason for optimism. His targeted killing of Iranian General Qassem Soleimani earlier this month delivered a rebuke to the Islamic Republic without pushing the Middle East into all-out war, which Trump’s supporters argue illustrated his foreign policy acumen.

The president also is boasting of the “phase one” trade deal he signed with China last week, pausing a trade war that threatened the economy. His second major trade deal -- the U.S.-Mexico-Canada agreement that replaces Nafta – passed the Senate with a bipartisan 89-10 vote on Thursday, and Trump has said he plans to sign the agreement into law later this week as the trial is ongoing.

Trump is seeking to leverage those victories into impeachment counter-programming, with a series of events touting his economic record. He left for the World Economic Forum’s annual meeting in Davos, Switzerland, on Monday.

“We’re achieving what no administration has ever achieved before,” Trump told an audience of farmers at a speech Sunday night in Texas. “And what do I get out it? Tell me? I get impeached!”

(Updates with Trump’s comments in Davos in fifth paragraph.)