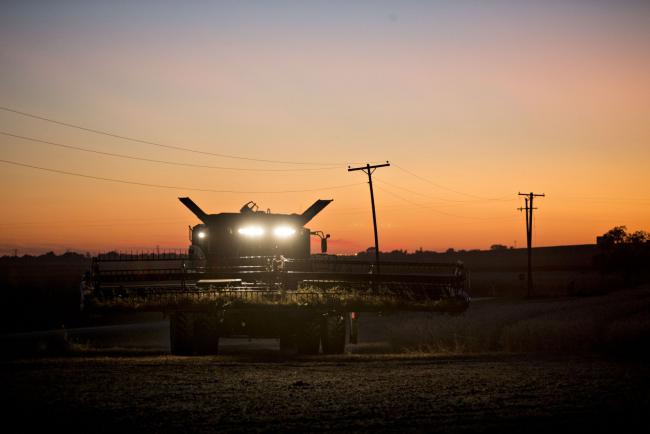 (Bloomberg) -- Donald Trump is boasting that he’s made farmers “really happy.” He’s not wrong, but it’s not just the trade deal that’s left farmers optimistic for 2020.

Analysts are saying the accord signed this week mostly just takes trade back to normal for American agriculture. China has committed to $32 billion in additional purchases over two years, but that buying will be market dependent and retaliatory tariffs are still in place. Even the status quo is still a welcome relief after more than a year of escalating tensions.

The thing that’s really moved the needle for farmers is Trump’s $28 billion farm bailout. The trade aid meant incomes rose in a year when they were widely expected to fall.

Even better news: U.S. Agriculture Secretary Sonny Perdue just confirmed he’s expecting the administration will make the third and final payment for the aid package, even with the China deal. Perdue said those checks should be coming “imminently.” That extra income boost underscores why farmers are feeling good in places like Iowa’s Sioux County, the top agricultural producer in a state that’s No. 1 for corn and hogs.

“I’m really optimistic,” said Chris Ten Napel, who farms 2,500 acres (1,012 hectares) and raises 15,000 hogs a year in a family operation with his father and brother in Sioux County. “Things are looking up, you might say.”

In a growing season marked by unrelenting rains, record-late planting and depressed prices, farmers like Ten Napel still managed to come out ahead thanks to hard work, some luck, and especially that Trump bailout.

In fact, the U.S. Department of Agriculture projects national net farm income for 2019 will be up more than 10% to the highest since 2013, with the bailout payments accounting for the increase.

There are other signs of shored up finances: Farmers became less reliant on loans at the end of 2019, with lending activity declining for a second straight quarter, the Kansas City Federal Reserve said Thursday. Meanwhile, rural economic sentiment began the year positive, reaching the highest point in 18 months, according to a Creighton University survey.

“Without the trade aid, almost no one would have made money,” said Eric Walhof, president of Northwest Bank in Sioux Center, Iowa. About half the bank’s farm borrowers turned a profit last year, and the rest had what he called “manageable” losses.

Just a few months ago, that would’ve seemed nearly impossible. Ten Napel remembers one 48-hour stretch that summed the whole dreadful thing up. He spent it on his tractor, catching one measly hour-long nap slumped over the steering wheel, as he raced through a rare dry spell to plant soybeans he figured might never fetch a profit.

“It was looking pretty bleak,” the 37-year-old said, sitting on a stool beside a wooden workbench in his equipment shed, his red tractor and combine parked behind him.

Sioux County is a fertile area of rolling hills with the scent of manure in the air. The towns are built around grain elevators, and rural roads are lined with cattle feed lots, hog buildings and corn-stalk bales. It’s Trump country -- he won 81% of the vote here in 2016. That support wavered little during the hard times of 2019.

“He understands we’re at the front lines of the trade war. He’s taken care of us,” Brad Den Herder, who grows corn and soybeans and raises hogs with his brother and father, said of Trump before trade deals were finalized this week. “We don’t feel forgotten.”

If it weren’t for the aid -- the $28 billion sum ringing in at more than twice as expensive as the 2009 bailout of automakers -- many Iowa farmers would’ve likely posted losses last year.

To agriculture economists such as Nathan Kauffman, of the Kansas City Fed, the bailout boost provided a troubling cushion. Even before the trade war and wild weather seized headlines, U.S. growers were squeezed by a global commodity glut, primarily because of increases in output in Brazil, Russia, Ukraine and other rivals.

“One of the concerns with the aid is the extent to which it encourages producers to continue the over-production of crops that aren’t that well supported by the fundamentals,” he said.

But federal subsidies have long been part of farmers’ financial picture, and while this program was extraordinarily large, it’s viewed as a good investment of taxpayer money to back up Trump’s China strategy.The Den Herder family farm had its best year in 2019 out of the past five, the 30-year-old farmer said, estimating his profits would’ve been halved without aid payments. Sioux County was one of the 10 largest recipients of the money, according to a database of payments compiled by the Environmental Working Group.

Even then, U.S. farmers don’t have a long leash to confront hurdles. Their working capital, a key measure of ability to withstand short-term setbacks, has been trending down for half a decade, dropping last year to half its level in 2014, according to USDA projections.There’s no telling, meanwhile, what the weather will bring. As it is, the hangover from 2019 still stings, some worse than others. In the Dakotas, some farmers haven’t been able to harvest late-maturing crops that are still covered in snow.

But recent price stabilization helps. Soybean futures in Chicago are up about 1% since Dec. 12, the day before Trump announced the China agreement. Compared with this time last year, they’re 3.3% higher.“We’re sitting pretty good,” said Ten Napel. On his farm, about two-thirds of last year’s corn and soy harvest is still sitting in storage bins. “If we sold the grain at today’s price, we’d make more money than we have the last three or four years.”