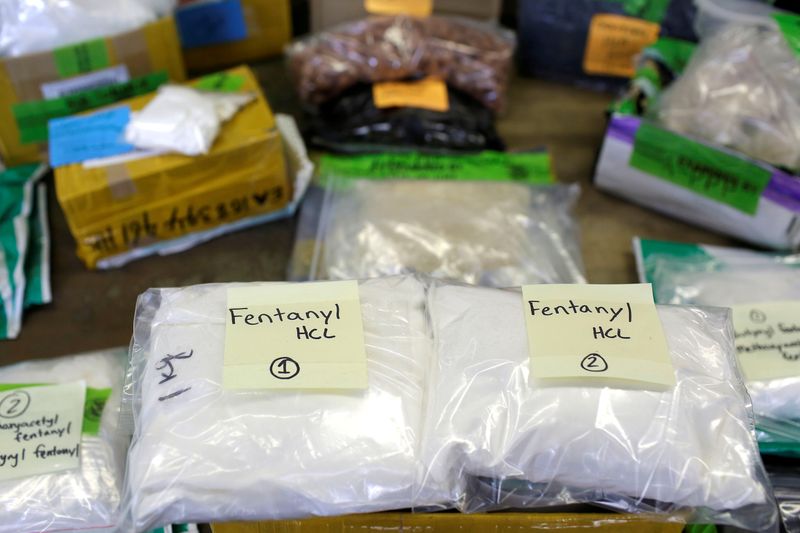 WASHINGTON (Reuters) - The Trump administration has resolved an internal dispute over how to handle new variants of fentanyl that it believes can beef up the fight against the deadly synthetic painkiller without hindering research to ease the opioid crisis, according to a draft agreement seen by Reuters.

The administration had hoped the deal, a copy of which was turned over to the Senate in the fall, would pave the way for Congress to pass their draft legislation into law, but so far it has failed to do so.

The measure would allow the Drug Enforcement Administration (DEA) to permanently place all fentanyl analogues into the same legal category as heroin and cocaine. That could make it easier for law enforcement officials to prosecute people who sell any chemical look-alike of the drug.

At the same time, the agreement would ease some of the strict rules governing research around fentanyl analogues, according to the text seen by Reuters and confirmed by officials from the Justice and Health and Human Services departments.

Researchers, including some in the federal government, have complained the proposed permanent restrictions on fentanyl analogues could hamper their ability to develop new antidotes to drug overdoses.

The U.S. Centers for Disease Control and Prevention found that about 41% of the 70,200 drug overdoses in the United States in 2017 were caused by fentanyl and illicit chemical copycats of the drug, which is 100 times more potent than morphine.

The agreement may come up at a House of Representatives subcommittee hearing on Tuesday, when officials will testify as lawmakers weigh whether to extend a temporary order that the DEA imposed two years ago targeting all fentanyl analogues before it expires on Feb. 6.

The Republican-controlled Senate punted on the issue in January by voting instead to extend the DEA's powers temporarily for an additional 15 months to allow for a new study into how it could impact fentanyl analogue research. The Democratic-controlled House has yet to act.

The DEA in February 2018 temporarily classified all fentanyl analogues as Schedule 1 drugs, meaning they are highly addictive and have no medical use.

Prior to that, the DEA and U.S. Food and Drug Administration had to add each new variant uncovered in the black market to Schedule 1 on a case by case basis, a lengthy process that could not keep pace with the rate of new analogues being developed.

The new variants also were more difficult to prosecute, as law enforcement officials had to prove they were chemically similar to fentanyl and intended for human consumption.

The U.S. government has long complained that labs in China have sought to evade U.S. regulations by tweaking the chemical structure of each drug.

Since the temporary order went into effect, Justice Department officials say it has helped deter chemists from creating as many new versions of fentanyl.

In 2019, the DEA only encountered two new types of fentanyl analogues, and mail seizures of the drug have dropped about 54% from 2017 to 2018, according to data provided to Reuters.

Criminal justice advocates have raised concerns about the order, saying it could add to the mass incarceration of low level dealers and drug addicts.

The agreement on fentanyl variants, forged by the Justice Department and U.S. Health and Human Services Department last fall, would enable the HHS Secretary to remove an analogue from Schedule 1 if it is found to have medical promise without the potential for abuse. It also would streamline some registration requirements for researchers.

Whether it will resolve researchers' concerns, however, remains to be seen.