Trump accused at trial of 'corrupt scheme' to pressure Ukraine 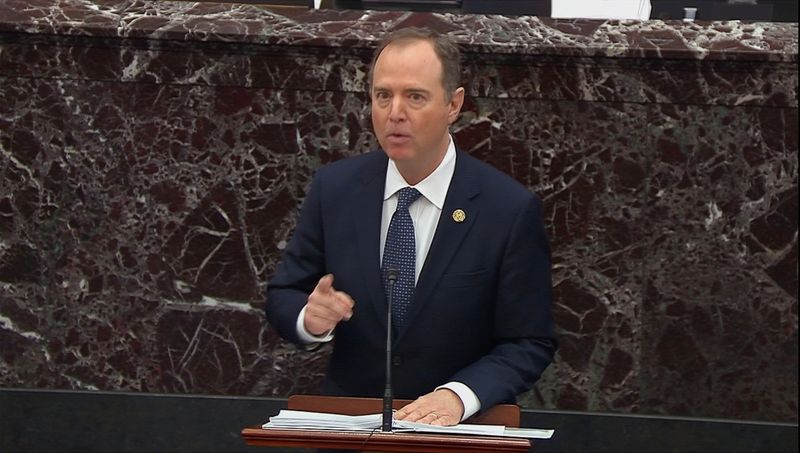 By Richard Cowan and Susan Cornwell

WASHINGTON (Reuters) - The lead Democratic prosecutor accused President Donald Trump at his impeachment trial in the U.S. Senate on Wednesday of setting up a corrupt scheme to pressure Ukraine to help him win re-election this coming November.

"President Trump solicited foreign interference in our democratic elections, abusing the power of his office to seek help from abroad to improve his re-election prospects at home," Schiff said, laying out the basic Democratic argument for why Trump should be found guilty and removed from office.

Democrats argue that Trump was trying to find dirt on Biden, a contender for the Democratic presidential nomination, and his son Hunter who had served on the board of a Ukrainian gas company, to help the Republican president win a second term.

The president denies any wrongdoing.

Trump is almost certain to be acquitted by the Republican-controlled 100-member Senate, where a two-thirds majority is needed to remove him from office. But the trial's effect on Trump's November re-election bid is unclear.

The case against Trump is focused on a July 25 telephone call in which he asked Zelenskiy to open a corruption investigation into the Bidens as well as a discredited theory that Ukraine, not Russia, meddled in the 2016 U.S. election.