Tom Steyer’s foreign policy plan: Just do whatever Obama did 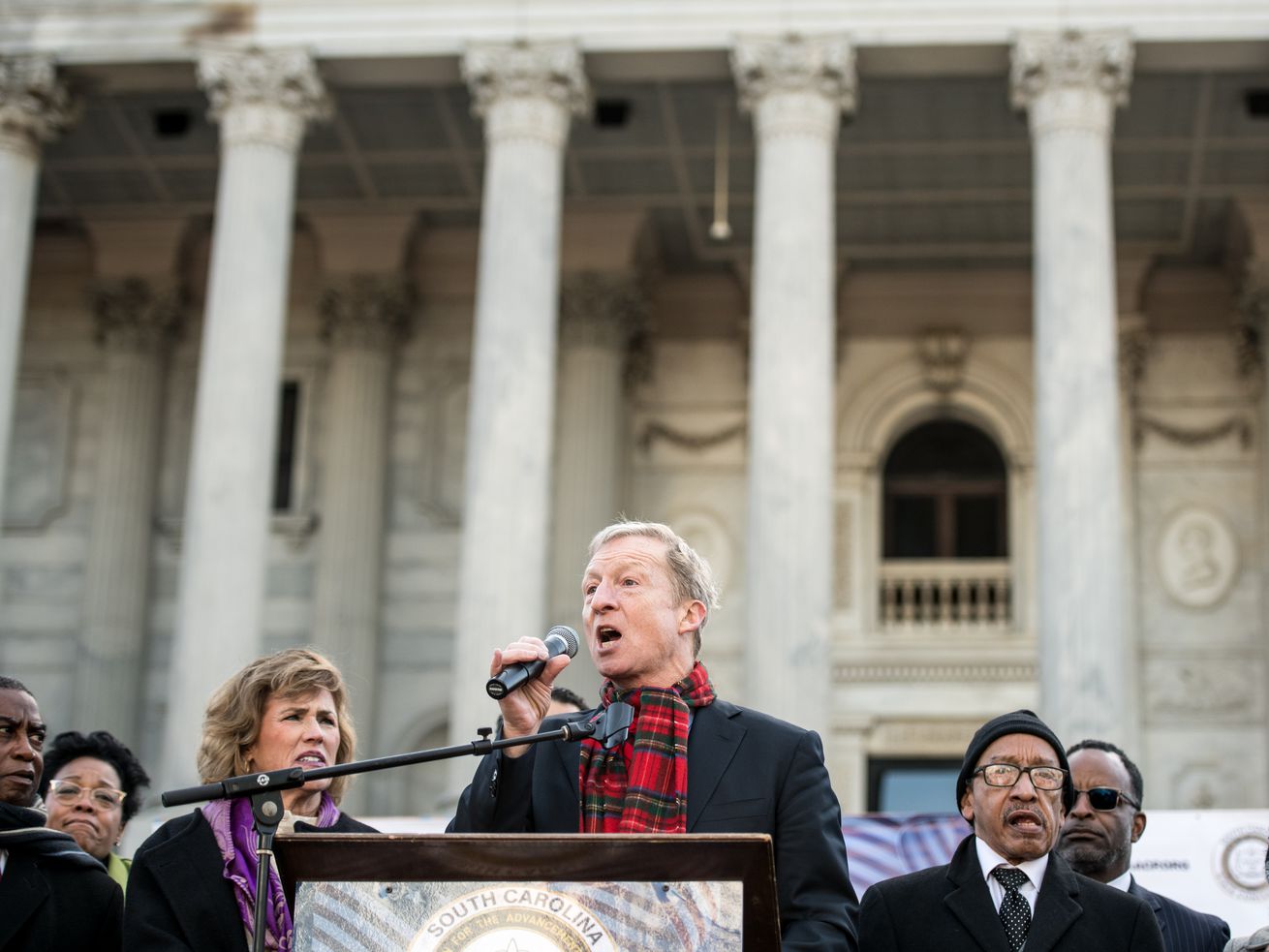 He wants a new climate deal, a relationship of trust with China, and to make a new Iran deal.

Businessman and billionaire Tom Steyer has a foreign policy plan to deal with climate change, China, and Iran: basically, do what President Barack Obama did.

In seeking a climate change agreement with China, a broader policy of mutual trust between Beijing and Washington, and something like the Iran nuclear deal, Steyer seems to be offering continuity — not change — from Obama-era foreign policy.

That’s the main takeaway from my short interview with Steyer on Sunday night. The long-shot presidential candidate lacks formal foreign policy chops, but he has consistently argued his years in business provided him with plenty of global knowledge. What’s more, he says it’s not experience, but rather judgment, that voters should most consider when deciding which Democrat would make the best commander in chief.

I wanted to explore that idea further with Steyer. How would he weigh a concession China might want in exchange for its support for a climate deal? Would he go to Congress before ever ordering the military to kill a terrorist? And how would he deal with Iran, which may be closer than ever to getting a nuclear weapon on the day he enters the Oval Office?

His response? Follow the Obama framework, and make the world admire America again.

Our interview, edited for length and clarity, is below.

You’ve been clear that tackling climate change would be your No. 1 priority as president, and you’ve also identified China as “frenemy.” To combat climate change, of course, you’ll need China to sign on to whatever pledges you might want. How will you get Beijing to agree to your climate demands?

We have a very important and complicated relationship with China, and there’s no chance for us to disengage from China. If there’s any country in the world that is going to suffer because of climate change, China’s going to suffer dramatically. So it’s absolutely in their interests to solve this.

The idea that we’re going to compel them to do something against their interest — is it true? In fact, it is dramatically in their interest to solve this crisis together with the other leading countries in the world.

So China will just sign on to a climate deal with the US simply because it’s in its interest to tackle climate change?

What President Obama did was the right thing, which was to go to them and work out a plan together. That’s the starting place in terms of coming up with a climate plan that can work for the whole world. That’s what we have to do.

It’s not going to be a question of threats. It’s going to be in the context of all of the other things that we do together. They’re the second biggest economy in the world, and we have incredibly intertwined economies. It’s practically impossible to separate the two countries.

What we’re going to have to do is make sure we work together so that a climate deal works in their economic interest as well as their environmental interests. But I don’t know how ultimately they are going to separate the two because if we don’t solve this, the suffering in China is going to be incredible.

But the world looks different now than it did when Obama was president. I don’t think anyone would disagree China would suffer from the effects of climate change. But one could imagine under President Xi Jinping that Beijing might try to extract concessions from the US in exchange for the climate agreement you so badly want.

For example, China could say “don’t criticize our treatment of the Uighurs” or “stay silent on our crackdown on Hong Kong.” So what’s a trade-off you’d be willing to make?

I think that that’s an inaccurate framing, because in fact a climate deal is something that dramatically helps China — and I mean dramatically. We have an absolute shared interest in solving this together and we have to make sure that we do it in a way that is good for growth and employment. But the idea that somehow they’re doing it for us, once you’re in that framework, I think you’re making a mistake.

I think your question seems to imply once again, as you did with climate, is that this is really a United States problem and don’t we have to deal with it? I think that’s not true. This is the kind of problem that the international community should deal with together. And in fact that’s when we’ve had the most success as a country, is working with other people on behalf of the values that we share with other countries.

Realistically, it probably would be some combination of countries. If you thought the UN could work on this, that would be one thing. But I’m not sure that it can.

The question is, how will you build a coalition of people to make it clear that internationally this is outside the range of acceptability? I don’t think it leads to isolating China.

We’re going to have substantial important differences with the People’s Republic of China going forward. We have them in terms of the theft of intellectual property, we have them in terms of the closing of markets. Those are ongoing things that are very significant for American working people and American business. Then we have issues, as you’re putting it, about human rights and democracy. Then together we have to share trade relations and the need to combat climate change.

It’s a complicated relationship, and we haven’t even gotten to anything military.

So what’s your China strategy?

For each one of those aspects I just mentioned, the question really was “how do you put that in the context of a very broad relationship?” I thought that President Obama and his team worked to have an actual relationship of trust, so that you actually could negotiate successfully. What Mr. Trump has done is gone to a bilateral relationship of confrontation and competition that clearly I don’t think has worked, I don’t think can work.

The framework you’re talking about is: What can we threaten them with to get them to give up something? How do we get them to solve our problem? I don’t think that’s the framework that successful negotiations take place in.

To be clear, I wasn’t saying the US has to threaten China to get something. But my concern is China may still demand something big from the US in order to get their cooperation even in areas of mutual interest and even if we’re working in a coalition. That’s why I wanted to know what you were willing to consider putting on the table.

They are always in the position of needing to sell things in the United States of America. Don’t take that out. As much as we are intertwined with them economically and from a trade standpoint, they absolutely need us. Never forget that.

So you think that, for lack of a better term, America’s trump card is that it’s a big market China needs to sell to, and therefore China has to work with Washington?

Is there any doubt? This is an export-driven country and you’re talking about the biggest consumer market in the world. Do I think that it’s important? Yeah, I do.

The question is, do you then go to a place of confrontation and escalation or do you go to a place where you work together to try and get things done? That’s partially a question of attitude and relationship. You can see from the Paris agreement on climate change that it’s possible to do that. And it’s possible to undo because you can see what Mr. Trump has been doing.

Let’s move on to Iran and the killing of Iranian military leader Qassem Soleimani. In your initial tweets on Trump’s decision, you called Soleimani a “terrorist” but blasted the administration for not seeking congressional approval.

In a Steyer administration, then, would you seek a congressional green light before killing a terrorist?

It is essential that we protect American service members and citizens throughout the region while working with our allies to prevent further escalation that could lead to a devastating war that Americans do not want. (2/2)

Let’s be clear, Soleimani was also a government official in a sovereign country. I believe that according to international law, in order for us to do that, there has to be an imminent threat, which the administration first said there was and then backed off that claim.

It wasn’t just killing a terrorist, it was something much beyond that, from the standpoint of international law. The whole idea was that it was such an imminent threat that [the president] couldn’t consult Congress, and he basically bypassed every ordinary channel procedure and accepted rule in doing it.

It seems like you’re more concerned about Trump’s broader strategy toward Iran.

Definitely. He has withdrawn us from the Iran nuclear deal, and then escalated continuously kind of along the lines of exactly what I’m saying, which is bilateral confrontation without a strategy and upping the ante at every stage. That’s what I think this was.

I think at some level you have to ask, “Does this make us safer?” Isn’t that the point? And I don’t believe that there’s an argument that this made us safer.

To be clear: You think the US killing Soleimani made the world less safe than it would’ve been had he not killed Soleimani?

You would enter the White House with Iran likely closer — but not close, to be clear — to obtaining a nuclear weapon —

Alright, so what is your plan to stop Iran from getting the bomb? What are you willing to do?

What President Obama was doing with Iran was basically in a coalition with some of our close allies. He was offering Iran economic relief in return for them giving up their nuclear ambitions for 10 years. From what I can tell, and I haven’t been to Iran in the last few years, but from what I can tell that trade still exists. They’re having huge economic issues now due to Trump’s policies.

To clarify, you think that framework will keep Iran from getting a nuclear weapon? Just give it economic relief?

When I look at the Middle East, I’m not interested in another 19-year war. I’m not interested in service people in the United States of America going there except to protect us. If you look at the last 20 years of American foreign policy in the Middle East, I don’t think people have been clear with what they’re doing. They have felt as if this is all playing with free money, but it’s not free money. Every dollar we spend there is a dollar we don’t spend on an American kid. That’s got to be taken into account.

Every time we send a service person into harm’s way, that’s an American life we’re taking and we’re putting at risk. There has to be an absolutely fantastic reason to do that. What I can see in Iran is our interest here is getting this region and the terror that they support to be tamped down and controlled for the sake of American safety.

To get there, then, you would lift the sanctions Trump reimposed and basically go back to the Obama-era Iran deal?

We have sanctions on, so that would have to be the give from us. We’re in the same position now. And the question is where are they and what can be redone?