Home World News Thousands in Iraq called for US troops to leave the country. But there’s more to the story.

Thousands in Iraq called for US troops to leave the country. But there’s more to the story. 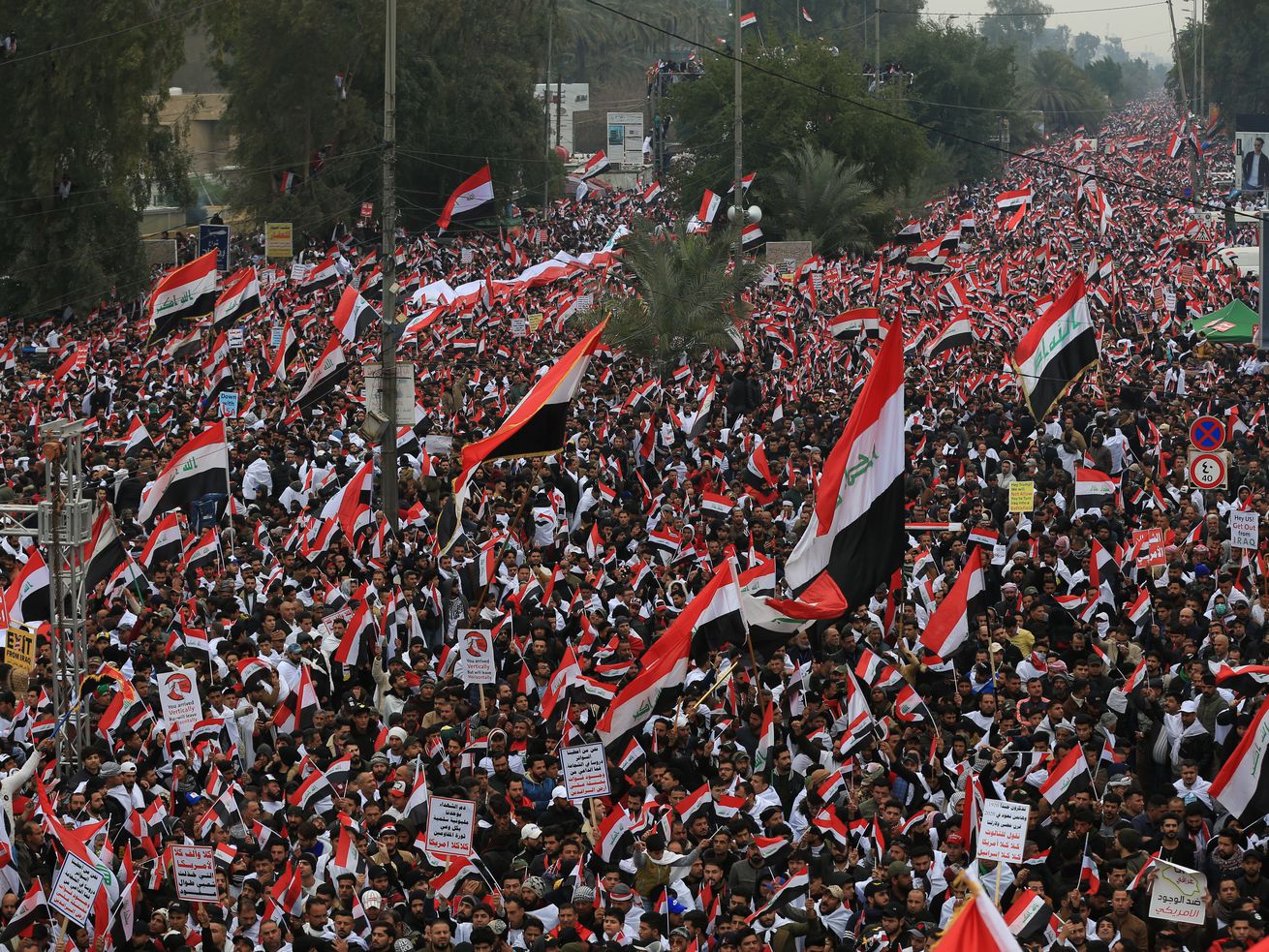 Thousands of Iraqis gather at a rally in Baghdad against the presence of US troops in the country on January 24, 2020. | Murtadha Al-Sudani/Anadolu Agency via Getty Images

It doesn’t look like these anti-US protests will be sustainable, at least for now.

Hundreds of thousands of Iraqis took to the streets of Baghdad Friday to demand the expulsion of US troops from Iraq.

A prominent anti-US Shia leader and Iranian-linked forces orchestrated the event, calling for a “million man march.” That didn’t happen, but the roughly 200,000-person crowd made clear their patience with the 5,000 US troops still in Iraq to defeat ISIS is running out.

Followers of Muqtada al-Sadr — the event’s organizer and a prominent anti-US Shia cleric — wore white robes or scarves, a sign that those people would die for their cause. White is the color of the shroud in which Muslims are buried.

“I came today to protest against the US being in our lands,” Mariam, 18, told Al Jazeera on Friday. ”We want to liberate our country from these chains of oppression. We have been suppressed and hurt by the US’s own interests in the region so we want them out of Iraq.”

Video from journalist @haider_husseini at Baghdad protests today: “It’s one of the largest protests I’ve seen in Iraq, and it’s not for religious reasons. Sadr’s followers said the US must leave Iraqi soil, and if the US doesn’t, they will respond.” Full story coming soon. pic.twitter.com/BI70qU8a48

While anti-American sentiment has long existed in Iraq, heightened by the 2003 invasion, this public showing is another signal that, for many, the US has overstayed its welcome.

“The turnout was very big, and it showed that Sadr and his Shia Islamist allies can still mobilize a lot of people,” Robert Ford, the deputy US ambassador to Iraq from 2008 to 2010, told me.

But there’s a larger backstory at play here, and it may be good news for those who want the US presence to continue.

Iraqi animosities are still turned toward Baghdad and Iran

As with any movement, this demonstration has important and differing facets to it.

One aspect is that Iran and those who want to work in common cause with it — in this case, Sadr — are taking advantage of the fallout from President Trump’s early January decision to kill Iranian military leader Qassem Soleimani.

Days afterward, Iraq’s parliament passed a nonbinding measure to kick US troops out. Importantly, that vote happened on sectarian lines, with Shia lawmakers choosing to boot America out while Sunni and Kurdish leaders opted not to participate.

Still, Sadr clearly wanted to build off that vote’s momentum with his carefully planned event. But the fact that it didn’t last long and many returned to anti-Baghdad protests indicates he may not have totally succeeded.

“Anti-Iranian chants could be heard sporadically throughout the march, too,” Iraq expert Rasha Al Aqeedi told me.

The other issue is the months-long protests against the Iraqi government for failing to govern effectively and provide basic necessities like water and electricity. Those demonstrations have focused intensely on Iran’s influence in the country, with many blaming Tehran for eroding Iraq’s sovereignty and worsening the country’s crisis.

That sentiment still appears to be a pervading one. Sadr seemed aware of this dynamic when he chose to hold his rally away from Baghdad’s Tahrir Square, where the anti-government protests are located.

“We support the protests in Tahrir as well, but understand why Sadr held this protest here so it doesn’t take attention from theirs,” Raed Abu Zahra, a healthy ministry worker in Iraq who attended Sadr’s event, told Reuters.

Al Aqeedi told me the US therefore won’t react too negatively to this demonstration. “Sadr can’t amass something like this every other day,” she said. “Unlike the Tahrir Square protests, they can’t sustain this.”

Others, like Ford, still offered a warning. “The US should be careful not to ignore real anger and frustration among big parts of Iraq’s Shia community,” he said. “The office of Ayatollah Sistani, perhaps the community’s most influential actor, again emphasized today that Iraq’s sovereignty must be respected.”

“He is speaking in large part to the US,” Ford continued, noting the recent US airstrikes on Iranian-backed militias targets in Iraq after those fighters killed an American contractor.

Despite years of calling America’s invasion a mistake, Trump threatened to impose tariffs on Iraq should it force US troops out. And Secretary of State Mike Pompeo said US forces won’t leave even if Baghdad formally asks them to.

Washington would certainly bristle if the protests indicated an imminent clash over America’s troop presence. But since Iraqis still seem more focused on their country’s failings, the Trump administration can probably breathe a sigh of relief — at least for now.