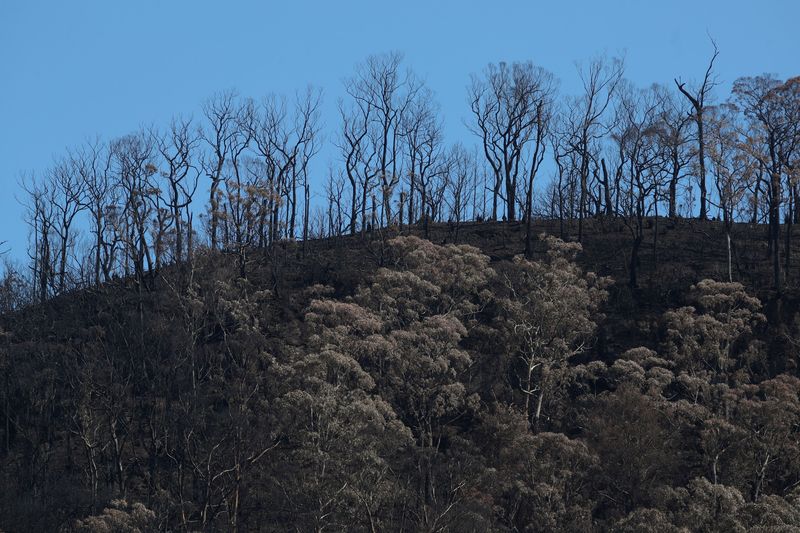 © Reuters. Charred trees are pictured on a hill burnt during the recent bushfires near Kangaroo Valley

By Colin Packham and Swati Pandey

SYDNEY (Reuters) - Australians are beginning to tighten their purse strings because of the country's deadly bushfires, according to a survey released on Wednesday, a sign that the economic impact of the crisis is likely to deepen.

As authorities warned that a days-long respite from high fire danger was coming to an end, economists said the cost to Australia's A$1.95 trillion ($1.33 trillion) economy could be as high as A$5 billion ($3.4 billion).

That would shave around 0.25 points off gross domestic product in the December and March quarters, a development that some economists said could prompt the country's central bank to cut rates as early as February and lower its growth projections.

Consumer sentiment in January was a hefty 6.2% lower than a year earlier, according to the Melbourne Institute and Westpac Bank (AX:WBC) survey released on Wednesday. Consumer sentiment data is considered a leading indicator, running ahead of actual spending data.

"The risk is that as economic loss from the bushfires materializes, consumers could still become more cautious in February," said Citi economist Josh Williamson.

The huge bushfires have cut through the country's east coast during the peak summer months when many businesses usually rake in earnings from both domestic and foreign tourists. Agricultural sectors, particularly the dairy industry, have also been hard hit.

The deepening financial woes intensify pressure on Prime Minister Scott Morrison, who has faced criticism over his handling of the crisis and his conservative government's stance on climate change.

Australia is one of the world's largest carbon emitters per capita due to its reliance on coal-fired power plants, and the bushfires have become a global talking point with regard to climate change politics. Morrison has repeatedly rejected calls for Australia to increase its carbon emission reduction targets, insisting such a step would it would do too much damage to the country's economy.

Late on Tuesday, Morrison reiterated his view that preemptive burning of bushland to remove flammable vegetation was as important as reducing emissions to prevent bushfires, a position that has been rejected by fire services chiefs.

Temperatures in New South Wales and Victoria states began to rise on Wednesday after several days of cool weather, leading authorities to renew "extreme fire danger" warnings in some areas where existing fires could be intensified or new blazes sparked into life.

Here are today's key events in the bushfire crisis:

* The wildfires have killed 29 people, destroyed more than 2,500 homes and razed 11 million hectares (27 million acres) of wilderness - an area one-third the size of Germany - since September.

* Scores of fires were burning in New South Wales and Victoria states on Wednesday. Temperatures in Victoria were expected to top 32 degrees Celsius (89.6 Fahrenheit) on Wednesday, leading officials to declare "extreme fire danger" in some areas. Temperatures in NSW were forecast to hit 40 degrees C (104 F) on Thursday.

* A Reuters analysis shows that Australian animals living in specific habitats, such as mountain lizards, leaf-tailed geckos and pear-shaped frogs, are battling the threat of extinction after fierce bushfires razed large areas of their homes.

* The air in Sydney is expected to again reach hazardous pollution levels on Thursday as smoke drifts over the city, the NSW state government said. Sydney, Melbourne and Canberra have all been periodically blanketed in smoke over the past several weeks, giving all three some of the worst air quality ratings in the world.

* Players at the Australian Open tennis tournament continued to make pledges of financial assistance. Among the latest were the seventh seed, German Alexander Zverev, who said he would donate A$10,000 for each match he wins and pledged his entire prize money of A$4.12 million if he wins the tournament. American John Isner has pledged 25% of all his prize money and A$100 for every ace he serves.