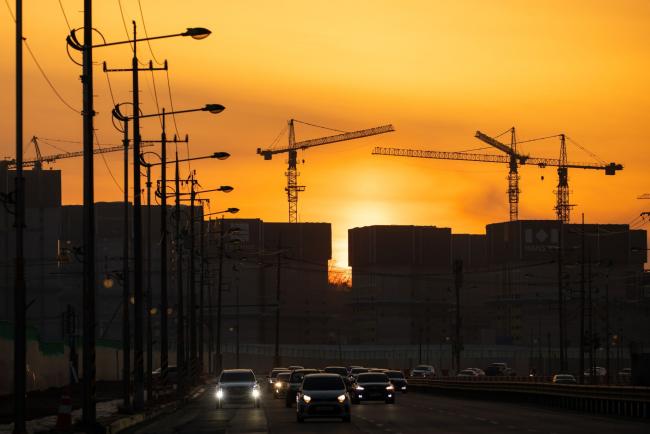 (Bloomberg) -- Sign up here to receive the Davos Diary, a special daily newsletter that will run from Jan. 20-24.

South Korea’s economy finished its slowest year of growth since the global financial crisis with a spurt that suggests the worst may be over for the Asian bellwether of global tech trade.

Gross domestic product expanded in the fourth quarter at its fastest pace since 2017, the Bank of Korea said Wednesday. The stronger-than-expected growth was fueled by an aggressive spending push by President Moon Jae-in’s government and a jump in factory investment that included spending on equipment for making semiconductors.

While government spending has been a critical prop for the Korean economy during 2019, the improved facilities investment adds to other signs out of South Korea that a tech industry slump may be bottoming, a potential positive sign for Korean and global growth this year.

Korea’s economy grew 1.2% from the previous three months in the final quarter, almost twice as fast as economists’ forecasts for 0.7%. On an annual basis the economy expanded 2%, for its weakest growth since 2009.

“Overall it’s looking up after bottoming out,” said Park Sang-hyun, an economist for HI Investment & Securities.

The KOSPI index rose after the report, gaining 0.3%, while other regional equities benchmarks dropped on concern over the spread of a deadly flu virus from China.

The quarterly growth was helped by an extra government budget approved in summer to help counter a prolonged export slump that has hit the economy hard. President Moon’s economic policy, which includes a drive to raise the minimum wage, is intended to stoke domestic demand and wean the economy off its dependency on trade.

“I believe government finance played a substantial role last year,” said Finance Minister Hong Nam-ki, acknowledging the administration’s support for the economy. “Government finance should play a complementary role when the private sector is in trouble.”

The Bank of Korea has also played its part, cutting rates twice in the second half of the year to support growth.

While the economy was in desperate need of public spending and rate cuts in 2019, the government may be able to pull back its support in 2020 if the tech sector and global demand pick up sufficiently. The central bank looks set to hold back on further rate cuts for the time being.

“The government helped keep the numbers on track while exports were struggling,” An Ki-tae, an analyst at NH Investment & Securities. “Now it may step back a little for a couple of quarters to watch how other indicators do.”

Recent data offer signs of improvement. Samsung Electronics (KS:005930) Co., the country’s biggest company and one of the world’s top suppliers of semiconductors, this month beat earnings forecasts. Preliminary export data for the first part of January shows chip exports on track for the first monthly gain in more than a year.

BOK Governor Lee Ju-Yeol last week also struck a more optimistic tone as the board voted to keep interest rates on hold. Lee said the economy would grow faster this year than in 2019 as he pointed to easing trade tensions between the U.S. and China and a looming recovery in chip exports.

Investment in chip-making equipment and other facilities rose 1.5% last quarter, while construction outlays jumped 6.3%, according to the growth report. Government spending increased 2.6%.

“Given the latest numbers came largely from government spending, it’s a bit hard to embrace them completely as positive,” said An Young-jin, an economist at SK Securities. “Still, a greater government role is a global trend, with improving outlooks for major economies owing much to fiscal policy.”

“Looking ahead, we forecast GDP growth of 2.3% in 2020, reflecting a gradual recovery in exports and investment. On the policy front, an expansionary fiscal stance will likely take the lead in supporting the economy. Our baseline expectation is for the Bank of Korea to stand pat in the year ahead.”