Home Politics Sanders says being a woman, age could be 'problems' for 2020 candidates

Sanders says being a woman, age could be 'problems' for 2020 candidates 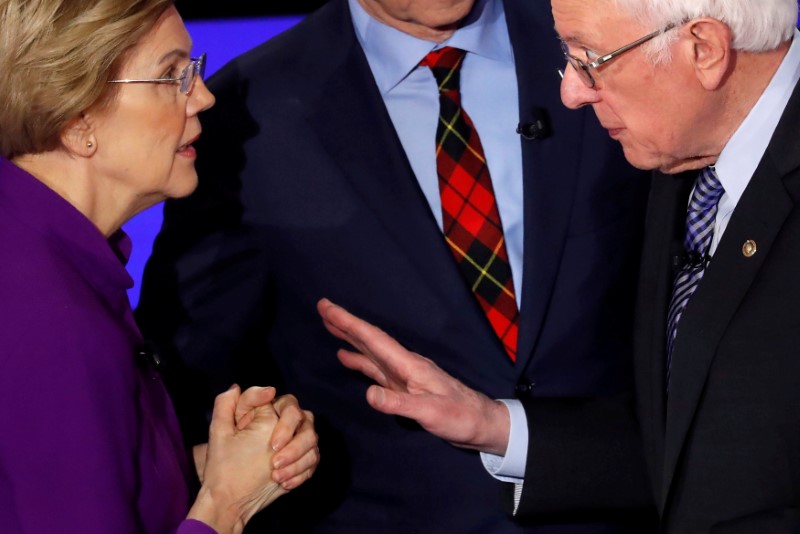 By Amanda Becker and Simon Lewis

DES MOINES, IOWA/CONCORD, N.H. (Reuters) - U.S. Senator Bernie Sanders struggled to move past a weeklong controversy over whether he told U.S. Senator Elizabeth Warren in a 2018 private meeting that a woman could not beat Republican President Donald Trump as the White House rivals campaigned over the weekend in the early-voting states of Iowa and New Hampshire.

In an interview with New Hampshire Public Radio on Sunday, Sanders said that the media had "blown this thing up" and that he has "always believed and believe today that a woman can be elected president."

"I think everybody has their own sets of problems," he added when asked whether gender is an obstacle for female candidates, citing being 78 years old as his own problem to overcome.

Sanders' response prompted a fresh round online backlash as the two senators and long-time liberal allies campaigned just two weeks before the first nominating contests begin, and as voters in the in Iowa and New Hampshire largely urged them to move on from the matter.

Warren, when asked by reporters on Sunday if being a woman is a "problem," said she had "no further comment on this."

"I have been friends with Bernie for a long time, we work together on many, many issues, and I've said all I'm going to say on this," Warren said.

The two senators had been at odds in recent days after Warren said Sanders told her during the meeting that a woman could not win the presidency in November 2020, which Sanders has denied.

The spat bubbled to the fore during last week's presidential debate in Iowa, when a CNN microphone caught Warren telling Sanders he made her out to be a liar on national television.

The disintegration of the non-aggression pact between the two friends - and the resulting online backlash from fervent supporters in both camps - caused hand-wringing among progressive groups, which urged backers of the two candidates to reserve their fire for centrist rivals.

Sanders is leading Warren in most national opinion polls but both trail behind former Vice President Joe Biden, a moderate.

Interviews with more than 20 voters who attended the two progressives' events on Friday and Saturday showed that they largely wanted the candidates to move on, even as they fielded new questions on the topic.

Sue Foecke, 40, attended a Des Moines house party on Saturday featuring Warren and hosted by Planned Parenthood Action Fund. Foecke plans to support Warren and does not have a backup candidate as she believes Warren should be viable in Iowa's caucuses and able to win delegates. She nevertheless said a continued focus on the 2018 meeting "doesn't add anything to the conversation."

At the event, when a voter told Warren she believed her side of the story, Warren said she and Sanders have been "friends for a long time" and that Democrats are "going to have to pull together" to defeat Trump.

Sanders likewise told a rally in Exeter, New Hampshire, that he would back the eventual nominee whoever it may be, promising that "after the hotly contested primary, all of us will unite."

"It breaks my heart," said Kathy Staub, 62, a Sanders backer said of the tension between the two senators.

Staub, who is involved in local politics in Manchester, likes both candidates but contrasted Sanders' history as a grassroots organizer with Warren's more recent emergence as a leading progressive with "policy wonk" plans.

Sanders spokesman Mike Casca said in an email that in Sunday's radio interview the senator was reiterating that "ageism, sexism and homophobia exist in America" and that "Trump will weaponize anything against his general election opponent."

Even as the controversy with Warren died down, however, Sanders' campaign has zeroed in on Biden. It criticized Biden's 2002 vote for the Iraq War, which Sanders opposed, and accused him of in the past supporting cutting Social Security benefits for the elderly, which Biden denied. The former vice president's campaign accused Sanders staffers of lying.