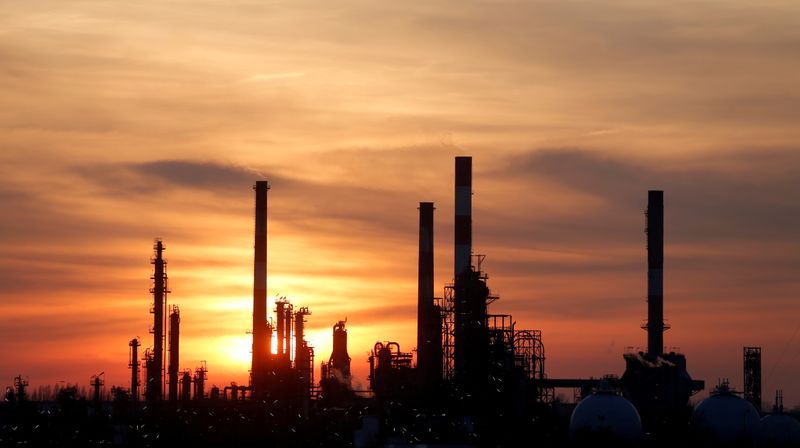 © Reuters. FILE PHOTO: The sun sets behind the chimneys of the Total Grandpuits oil refinery southeast of Paris

By Shadia Nasralla and Katya Golubkova

LONDON (Reuters) - Oil futures were set for a sixth day of losses as the death toll from a virus in China rose, but the heavy sell-off of recent sessions was curbed by output outages in Libya and OPEC comments designed to calm demand fears.

U.S. West Texas Intermediate (CLc1) was down 32 cents at $52.82 a barrel, after slipping to its lowest since early October in the previous session at $52.13. Both contracts are on track for their worst monthly falls since May.

The United States and other countries warned against travel to China as the coronavirus death toll rose to more than 100 and after the virus was detected in more than a dozen countries outside China.

Oil investors are concerned that travel advisories, other restrictions and any sizable impact on growth in China and elsewhere will dampen demand for crude and related products against a backdrop of plentiful supply.

Japan, one of the world's top oil buyers, warned about the risks to its economy from the virus, and Asian stock markets continued to suffer.

As the oil price fell below that seen during a December meeting of the Organization of the Petroleum Exporting Countries (OPEC) and its allies led by Russia, Saudi Arabia said on Monday the group could respond to any changes in demand.

Saudi and other OPEC producers, however, sought to downplay demand concerns resulting from the virus outbreak.

The group known as OPEC+ agreed in December to widen their supply cuts by 500,000 barrels per day (bpd) to 1.7 million bpd until the end of March.

While markets wait for an update on China's oil demand, one eye is on Libya where output is down by nearly 75% to just below 300,000 bpd amid the most extensive oil blockade for years.

"Markets need to get a proper assessment of oil demand in China," said Olivier Jakob of consultancy Petromatrix. "And as long as Libya continues to be shut, OPEC probably does not need to do anything."