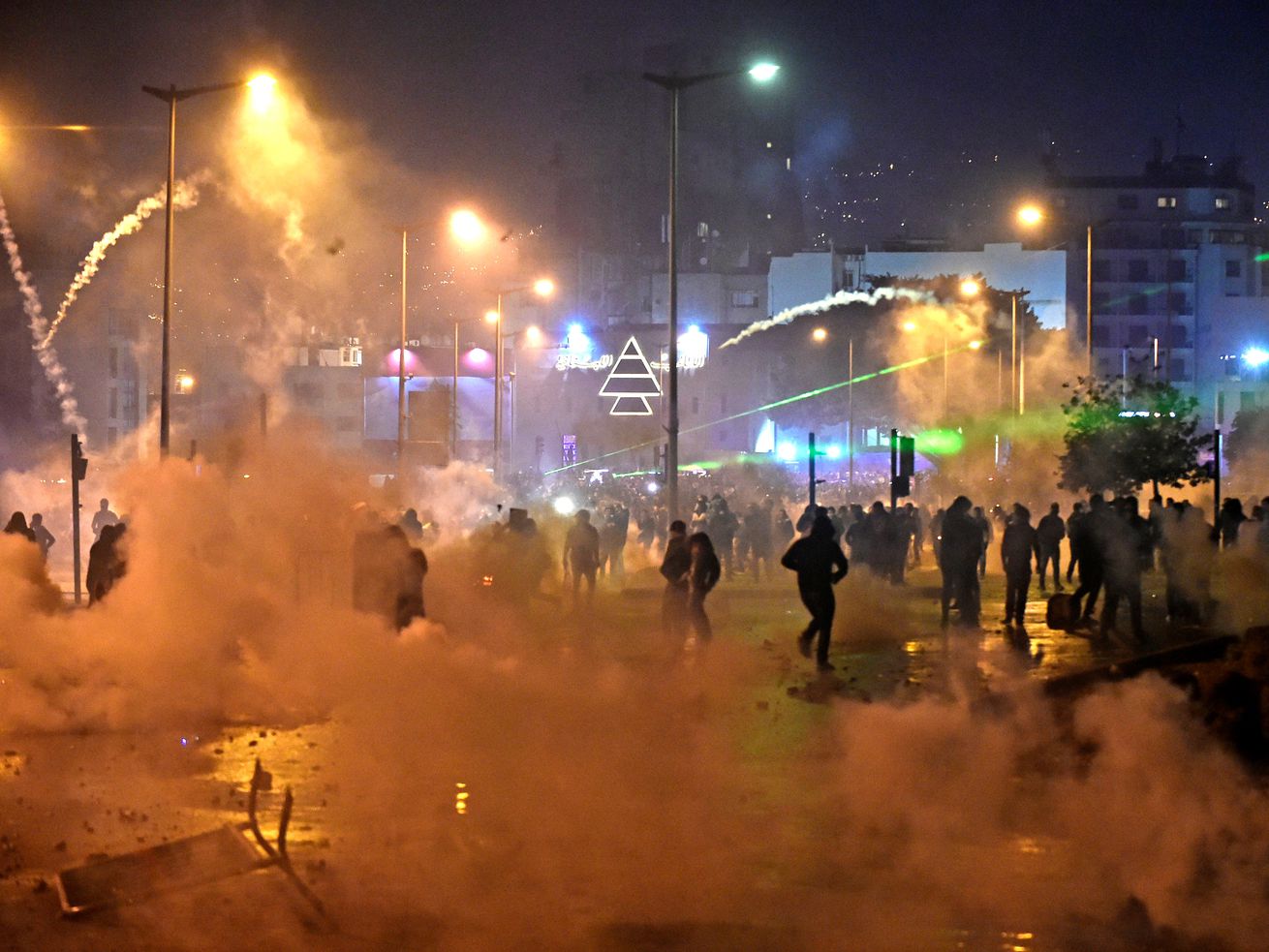 Saturday, protesters clashed with police in Beirut in one of the most violent days since anti-government protests began in October.

More than 300 people were injured on Saturday during clashes between protesters and police in Beirut, Lebanon, as the county struggles to find a way out of its worst economic crisis in decades.

The protests first began last October after the government attempted to tax WhatsApp users to generate funds for damage caused by wildfires — some which protesters argued could have been avoided if the government had better prepared for the blazes. Already exhausted by water and electricity shortages and the rapid devaluation of the Lebanese pound, people took to the streets demanding the resignation of then-Lebanese Prime Minister Saad Hariri.

Hariri resigned on October 29, but there have been major delays in forming a new cabinet. Hassan Diab, a university professor who is slated to become the next prime minister, was expected to give an update on the formation of a new cabinet Sunday, but left a meeting with Lebanese President Michel Aoun without doing so.

Even before the absence of Sunday’s cabinet report, protesters rejected this lack of progress, and began calling for a completely new government filled with experts that lack any ties to established political parties. Diab has promised his cabinet will meet this requirement, but protesters have signaled they do not trust him — and that they do not want him as prime minister.

Frustrated with this political impasse, and a dismal economic outlook, thousands of protesters gathered on Saturday afternoon under the slogan “We will not pay the price,” in reference to the country’s crushing $87 billion debt, according to the Associated Press.

Clashes began when rioters threw stones and firecrackers at police dispatched near the parliament; the authorities responded with water cannons and tear gas. It was one of the most violent days since the protests started three months ago, and more than 300 people were injured.

Officials responded forcefully to news of violence. President Aoun called on the army to “protect the safety of peaceful protesters and of public and private property, and to restore calm to central Beirut,” according to his office. The AP’s Dalal Mawad reported seeing the military take to the streets in downtown Beirut Sunday following the president’s statement:

Weapon experts correct me if I am wrong , but isn’t that the army parading Beirut’s downtown with heavy weaponry including RPG??? #LebanonProtests pic.twitter.com/8CvdOuJL1t

#Lebanon Interior Minister: "More than once I have promised to protect peaceful protest & I have always upheld the right to protest. But what turns from protest into blatant attacks on members of the security forces & public & private property is condemned & never acceptable." https://t.co/zTrXY1f3EY

The protesters — and some experts — are criticizing the government’s response, however, calling Saturday’s use of force excessive, especially as reports of tear gas canisters being shot at the protesters’ heads began to surface on social media.

Aya Majzoub, a researcher at Humans Rights Watch in Lebanon, tweeted: “The riot police showed a blatant disregard for their human rights obligations” and called on the government to launch a transparent investigation into the police force. Majzoub also demanded any wrongdoing on the part of officers be met with disciplinary action.

The riot police showed a blatant disregard for their human rights obligations, instead launching teargas canisters at protesters’ heads, firing rubber bullets in their eyes and attacking people at hospitals and a mosque.

Although the violence died out by early Sunday morning, protesters show no sign of backing down anytime soon. Zeina Khodr, a reporter for Al Jazeera in Beirut, told the outlet that the “people are very defiant.”

“They say the more violence used against us, the more revolutionary we become,” Khodr said. “They are promising to stay in the streets and continue with their protests action until they see a change in leadership.”

And indeed, despite Saturday’s violence, more protesters took to the streets Sunday, chanting that they would “continue our journey.”

Security forces have reportedly attempted to break up Sunday evening’s protests, but according to some on social media, including freelance journalist Luna Safwan, the demonstrators are largely standing resolute, even taunting law enforcement officials with chants of “again, again, again,” as they shoot tear gas.

VIDEO: I am still in Down town #Beirut and more teargas is being shot at protestors - the way they are responding is hilarious, protestors just started shouting "again again again" #lebanon #LebanonProtests pic.twitter.com/tjaWUcsYwj

Although the protests in Lebanon first began in October, the frustrations that led to them have been increasing for years.

Many have long been frustrated with what is seen as the corruption of elite politicians, who took control of the country after the Lebanese Civil War ended in 1990. And it doesn’t help the country’s leaders have been ineffective at mending the worst economic crisis Lebanon has faced in decades.

Economic growth fell to 0 percent this year, according to Reuters, and the country carries a debt of about $85 billion. Its current GDP is $55 billion. Meanwhile, the unemployment rate for those under 35 has soared to 37 percent. The value of the Lebanese pound has fallen as prices increased, a monetary situation worsened by a dearth of US dollars.

For the last 20 years, Lebanon has interchangeably used US dollars and the Lebanon pound thanks to a central bank policy that set the exchanged rate at about 1,500 pounds to the dollar, according to The New York Times.

In theory, using both currencies should pose no problems. But to sustain the system, Lebanon has to continuously bring in new dollars, something it did in the past largely by wooing investors. The system began showing strain as local banks were required to honor high interest rates they had promised these investors. And it was further taxed by difficulty in finding new investors who weren’t frightened by regional turmoil.

Without these foreign investors to funnel in more dollars into the market, banks have been struggling to provide money to their everyday customers.

In response, banks have been regulating the amount of money people can withdraw or transfer. Without access to their money — even when they have money in their accounts — people are struggling to pay basic necessities such as rent. And so, people have taken to the streets to protest.

“I have seen a woman begging — literally begging the bank employee — and going on the floor and kissing it, asking for her money,” Khaled Taki, a 68-year-old consultant from Lebanon, told France 24.

“They have your money, and they will give it to you when they want to, just like a father giving his son a weekly allowance,” he added.

Coupled with the political turmoil, the economic crisis threatens to have long-lasting effects. The World Bank announced poverty rates could increase by 20 percent — meaning half the country would be living in poverty — if solutions to the political and economic impasses are not found, according to Al Jazeera.