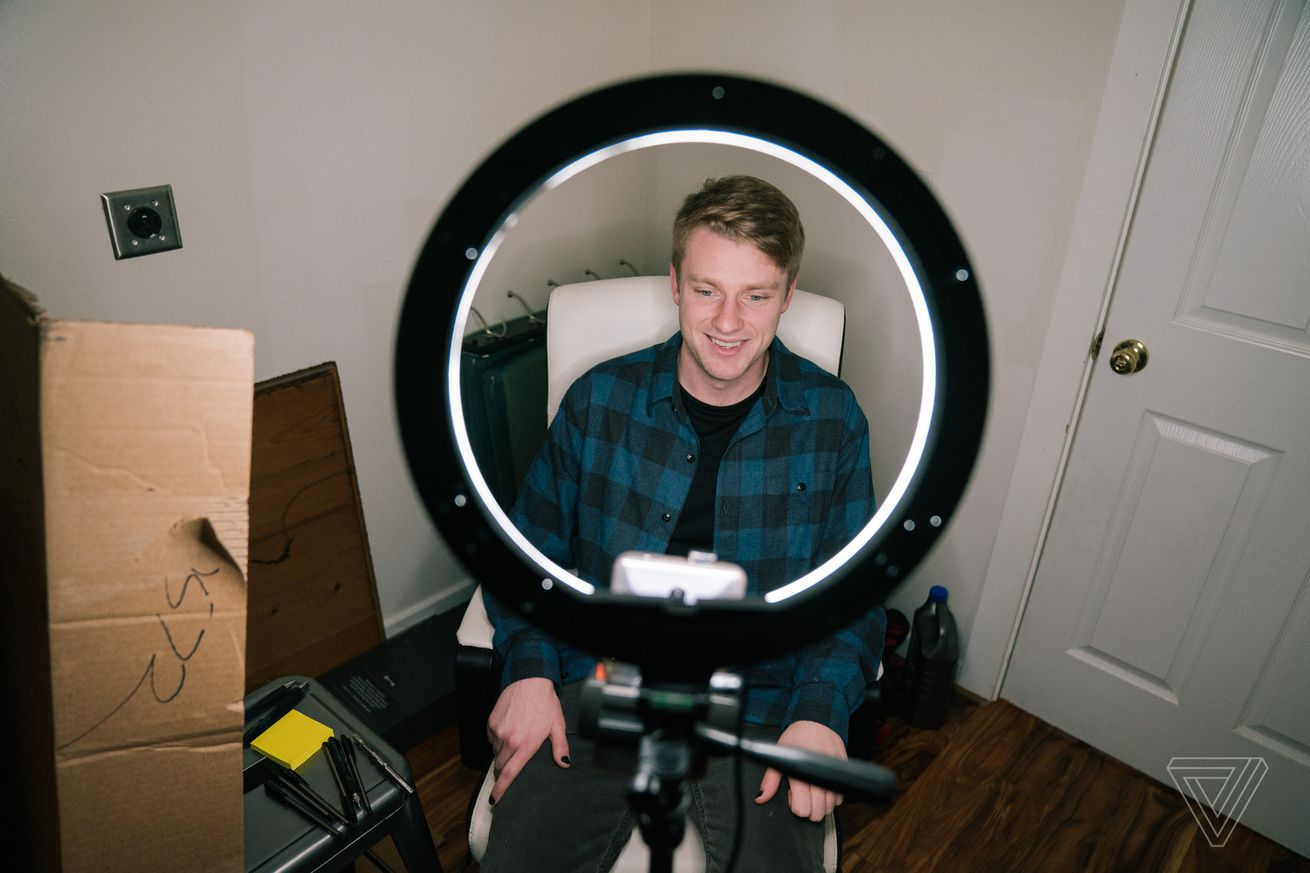 Jovelle Tamayo for The Verge

Joshua Collins looks like just about every other young person on TikTok. His nails are painted black, his videos are set to trending songs, and he’s not afraid to dunk on fascists online. But where many young people use the app for clout or entertainment, Collins’ TikTok has become the centerpiece for a new kind of political campaign — one he hopes will carry him all the way to Congress.

Collins is a 26-year-old socialist truck driver running to represent Washington state’s 10th district in Congress, which covers parts of Olympia, Spanaway, and Puyallup. Collins launched his campaign in April after watching Rep. Alexandria Ocasio-Cortez’s (D-NY) triumphant 2018 primary and deciding anything was possible. He had just turned 25, even younger than AOC and skirting the edge of the minimum age for House members to be sworn in.

“In 2018, that was huge. It changed everything. We went from ‘we should do this’ to ‘we can do this’,” Collins told The Verge. “There’s no way to describe how big an impact that had on the grassroots activist communities.”

For most of 2019, the odds were stacked heavily against Collins. The solid-blue seat had been held for three terms by Denny Heck, a Democrat who took the 2018 election by nearly 30 points. But in December, Heck announced his retirement and threw the race wide open. Collins still faces steep competition from more conventional candidates — particularly former state Rep. Kristine Reeves and former Tacoma mayor Marilyn Strickland — but his odds are now better than anyone expected.

Collins also has one crucial advantage over Reeves and Strickland: he’s kind of famous online. Before he formally launched his campaign last spring, Collins had around 40,000 followers on Instagram. His Twitter following was much smaller, but after a few well-timed retweets from Ocasio-Cortez, thousands of people started flocking to his account. Last October, he joined TikTok and launched his official campaign account @joshua4congress. As of publication, the account has over 26,000 followers. That presence on Instagram, Twitter, and TikTok hassled to a “big boost in our donations and volunteer signups,” Collins says.

As his TikTok following grew, Collins began urging followers to support him more directly by joining his Discord server. A messaging app similar to Slack, Discord has become Collins’ main hub for volunteers, allowing him to coordinate campaign drives with almost no overhead costs. Around 1,300 people have joined the server, often to share memes, news, election polls, and conduct opposition research. Volunteers across the country are able to phone and text bank and make social media posts to support his campaign by signing up for his Discord. The Discord membership is a fraction of his TikTok following, but potentially far more powerful. Collins calls the Discord server “a campaign office, but online” and a “remote organizing ‘space’” for volunteers to talk shop and inspire other young members of the resurgent left to run for political office themselves.

“Our Discord has literally doubled in size since I started using it, and my timely TikTok video about my incumbent opponent dropping out was part of a massive two-day fundraising haul,” Collins told The Verge. “If it isn’t translating for other people, they probably aren’t using it right.”

Other campaigns use messaging apps like Discord to organize, too. Sen. Bernie Sanders’ (I-VT) 2020 campaign uses Slack to connect with volunteers across the country for his national presidential campaign. In this Slack, there are channels for volunteers to chat about the campaign and sign up for phonebanking shifts.

But a passionate online fan base can also be a liability. Andrew Yang has leaned more heavily on online organizing than almost any candidate, but #YangGang memes became uncomfortably popular with right-wing trolls. Right Wing Watch reported last April that Yang’s team was forced to kick out a volunteer who was also a popular racist podcaster.

The Collins campaign has taken proactive measures to ensure that the trolls don’t get out of hand. To even enter his Discord server, you have to fill out a form on his campaign website. He has volunteer moderators who keep the peace on the server and “democratically establish criteria for things like bans, mutes, and channel use.” Once you join the server, you’re greeted with a few simple rules bookended by LGBTQ flag emoji: don’t be toxic; keep the server a safe, inclusive space; and engage with others in good faith.

Support from your community is important for running any campaign, but if you’re pouring time and resources into making content, it better be good. Collins’ tweets were already hits with his followers, so he used that language paired with trending songs on the app to get his policies and face in front of people.

“When we started, TikTok was an experiment,” Collins said. “But when I started posting videos it was obvious that there was demand for the kind of content I was already putting out on Twitter with a few small tweaks.”

According to TikTok, Collins’ videos have received over 570,000 likes, often being viewed anywhere from a few thousand to a hundred thousand times each. Most of the videos are simple and read like tweets, which is part of the strategy he describes. In one, Collins stands in front of the camera with pink and baby blue text overlaying the video just saying “TRANS RIGHTS.” In another, he duets another video posted by a creator with close to 5 million views where two people just destroy an iPhone. Collins responds to the ostentatious waste by staring blankly at his phone with “yeet the rich” written above his head.

He wants to abolish not just ICE, but also the CIA

The TikTok memes don’t exaggerate his policies by much. Collins is a socialist. It’s how he introduces himself to voters and what he types into his social media bios. This puts him leaps and bounds further to the left than the mainstream Democratic Party under which he’s running. He supports the Green New Deal, but he wants to put even more pressure on oil and gas companies and the government to create change, including nationalizing power production. He wants to abolish not just Immigration and Customs Enforcement (ICE) but also the CIA. He supports Medicare for All, but he also wants to cancel all medical debt and make all prescription medication free. Collins is running as a Democrat using TikTok — a new app that has yet to prove effective in campaigning and one that the Democratic National Committee warned candidates not to use in the first place due to national security risks regarding its ties to the Chinese government.

That kind of fearless leftism is much more common online than in conventional politics. In December,BuzzFeed News reported that leftist TikTokers were “booming on the platform.” Teens are co-opting the popular songs of the moment and injecting socialist messages into videos. BuzzFeed spoke to one creator, Gem Nwanne, who said that he uses the platform to make left-wing policies more accessible. Other young progressives, like Skyler Johnson who is running for New York’s state Senate, have also made strides to integrate TikTok into their campaign strategies, according to Morning Consult, and have found some success.

Yet, socialist and progressive TikTok hasn’t been around long enough to have much impact on electoral politics. But if Collins wins his primary, it would be a watershed moment for the community and potentially the start of something much larger.

Collins has also gotten a significant boost from TikTok’s content recommendation algorithm. Collins’ comment sections are littered with users writing “fyp.” It’s how users let creators know that their videos landed on TikTok’s coveted For You page, an endless feed of videos tailored to a user’s specific tastes, and it’s a huge source of new followers for anyone who makes it on. No one knows exactly what it takes for your content to make it on that feed, but it’s where most video and creator discovery takes place. TikTok’s parent company, ByteDance, won’t discuss the algorithm in public, which makes developing a successful strategy for the platform difficult. In particular, it’s unclear how much the algorithm is localized: if you live in Tacoma, do you see more Tacoma-area TikToks? Some users have noticed the phenomenon, and it could work in Collins’ favor. It costs money for candidates and brands to geographically target their ads on platforms like Facebook and Twitter. For a candidate who can’t afford these kinds of ads, TikTok could be the frugal option. (TikTok declined to comment for this story.)

TikTok and Discord alone won’t be enough to get Collins to Congress. According to census numbers, less than 10 percent of his district’s voters can be considered members of Generation Z, and 90 percent of the US has never used TikTok. There’s still no substitute for conventional campaign work: handing out pamphlets, speaking at local events, and shaking hands.

But while TikTok can’t promise Collins’ success, it helps him raise money from people outside of his district who share his vision and want to see more people like him in government. It makes his local campaign a national spectacle. People across the country who otherwise would have never known about his campaign donate to him. After his videos go viral, the Collins campaign always sees an uptick in donations. That money goes toward gas, printing posters, and doing the groundwork his campaign so desperately needs.

“I grew up with the internet and I know how everything works, but it’s a lot more than that,” Collins said. “My online personality is me, even as a candidate. I don’t talk like a politician, I don’t post like one, and regular people can tell the difference between a canned social media strategy and a candidate who’s accessible online.”