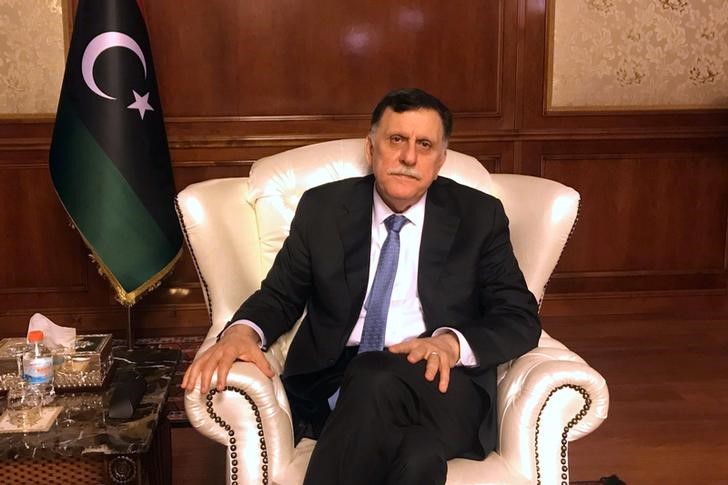 By Ulf Laessing and Nadeen Ebrahim

BERLIN (Reuters) - Libya will face a "catastrophic situation" unless foreign powers put pressure on eastern-based commander Khalifa Haftar to lift a blockade of oilfields that has cut output to almost zero, the country's internationally recognized premier said on Monday.

Since Friday, Haftar's forces have closed Libya's major oil ports in a power play as foreign powers were meeting with his supporters in Berlin at the weekend to push him to halt a military campaign to capture the capital Tripoli.

Tripoli-based Prime Minister Fayez al-Serraj told Reuters he rejects eastern demands to link a reopening of oil ports to a new distribution of oil revenues among Libyans, saying such income was in any case meant to benefit the entire country.

"The situation will be catastrophic should it stay like this," Serraj said in an interview in Berlin.

"I hope foreign countries will follow the issue," he said when asked whether he wanted them to lean on Haftar to lift the blockade of Libya's Mediterranean oil export terminals.

Much of Libya's oil wealth is located in the east of the sprawling North African state but revenues are channeled through Tripoli-based state oil firm NOC, which says it serves the whole country and stays out of its factional conflicts.

Haftar's parallel administration has repeatedly sought to export oil while bypassing the NOC but has been thwarted by a United Nations ban, diplomats say.

NOC sends oil and gas revenues, Libya's economic lifeline, to the Tripoli-based central bank, which mainly works with Serraj's government though it also funds some public salaries, fuel and other services in the Haftar-controled east.

In the interview, Serraj also said his government would respect the summit's decision to establish a ceasefire in Tripoli and open intra-Libyan talks to end conflict as part of a United Nation-led plan.

But he ruled out meeting Haftar again. In Berlin Serraj and Haftar conferred with world leaders but not meet each other.

"For me it's clear....We will not sit down again with the other side," Serraj said, adding that the question of peacemaking dialogue should not be limited to a meeting of two leaders.

Libya has had no stable central authority since strongman Muammar Gaddafi was overthrown by NATO-backed rebels in 2011. For more than five years, it has had two rival governments, in the east and the west, with streets controlled by armed groups.

Sunday's Berlin summit convened the foreign supporters of Libya's warring sides. Haftar enjoys the support of the United Arab Emirates and Egypt, while Serraj is backed by Turkey.

The foreign powers agreed in the German capital to shore up Libya's ramshackle, much violated true but the gathering was overshadowed by Haftar's oil blockades.

The European Union will discuss all ways to uphold a formal ceasefire but any peace settlement will need real EU support to make it hold, the bloc's top diplomat Josep Borrell said on Monday.

(This story corrects paragraph 9 to say "Serraj" not "Haftar")