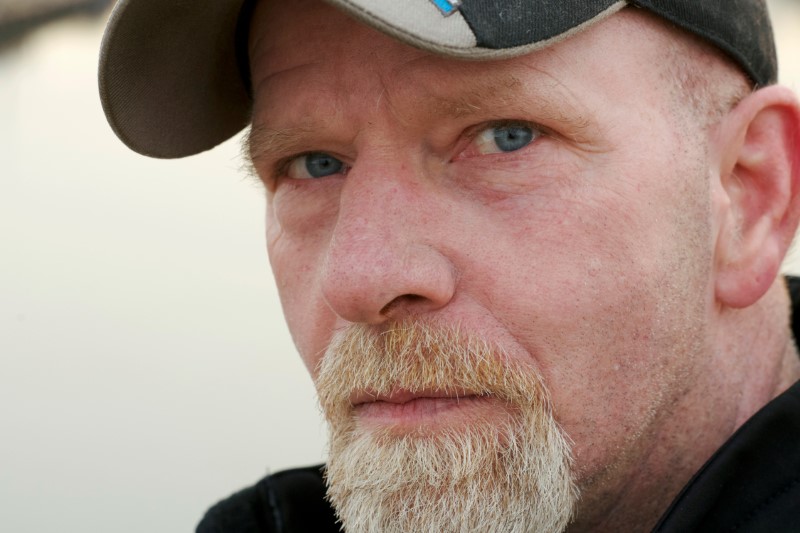 © Reuters. Lee Murray, who worked for the PES refinery for 25 years, poses in front of the Philadelphia Energy Solutions plant refinery in Philadelphia

By Laila Kearney and Stephanie Kelly

A colleague gave it to him on his first day on the job, only months after the older Murray died, an act emblematic of the tight bond workers forged at the East Coast's oldest and largest oil refinery.

"I wanted to follow in my father's footsteps. Plus, it was one of the higher-paying jobs in the area with just a high school diploma," said Murray, 54, who was a unit operator.

The hard hat now sits on a shelf, and Murray has moved from his roots a short drive from the refinery complex for work more than 300 miles (480 km) away, near Pittsburgh.

He, along with more than 1,000 coworkers, was thrust into a shrinking East Coast refining market after refiner Philadelphia Energy Solutions shut down following a colossal fire on June 21. Those workers accounted for about half of Pennsylvania's roughly 2,000 oil refining jobs, U.S. Bureau of Labor Statistics data shows.

The massive complex, located less than three miles (4.8 km) from downtown Philadelphia, is empty but for a handful of caretakers watching over the site. The complex is now slated to be sold to Chicago-based Hilco Redevelopment Partners for $240 million, but the chances that it reopens as a refinery are slim.

While the U.S. economy has been growing steadily for several years, oil refining employment has slipped as automation and the shuttering of plants has bit into the industry. Refining jobs are down by nearly 8% nationwide since 2009, according to BLS figures.

The U.S. Gulf Coast is the one region that has seen a surge in oil industry employment, presenting PES workers with the difficult choice of staying local for jobs that pay less, or moving hundreds of miles away. Workers who have stayed in Philadelphia have left the industry or dipped into retirement savings to pay bills while looking for work.

"It's a tough industry to be in unless you're in Houston and willing to live down there," said Rich Francis, 28, a former PES gasoline trader. His wife requires continued medical care for a kidney condition, which had been covered by company health insurance. He ended up leaving the industry to remain near family, who can help during emergency hospital visits.

The process of finding a job has been worsened by the terms of PES layoffs that cut off health benefits two months after the fire.

PES liquidated its group medical insurance plan under a provision allowed for companies in bankruptcy to save costs. That blocked dismissed workers from temporary health coverage under the Consolidated Omnibus Budget Reconciliation Act (COBRA), according to a document seen by Reuters.

The lack of health insurance has made the job search more urgent for PES's unionized workforce, whose average age was in the 50s, according to a 2016 study by the United Steelworkers' local.

"It was really a kick in the teeth," said Mike Gioquindo, 56, who was laid off after 13 years at PES, leaving his family without healthcare coverage for several months. He is now receiving benefits from his new job in public transportation, but took a 30% to 40% pay cut.

The 335,000-barrel-per-day plant was the third major East Coast refinery to close since 2008. Crude processing capacity in the region has dropped by 50% in the last 10 years to roughly 1.5 million bpd, according to iirenergy.com data.

Ryan O'Callaghan, the former local union head at PES, who worked there for 14 years, dropped his daughter off at her first day at a new college the day the refinery closed.

O'Callaghan is looking to shift careers to stay near his family.

"It's like being in the twilight zone," he said.