'Kind of pointless': In battleground Michigan, impeachment takes back seat to everyday issues 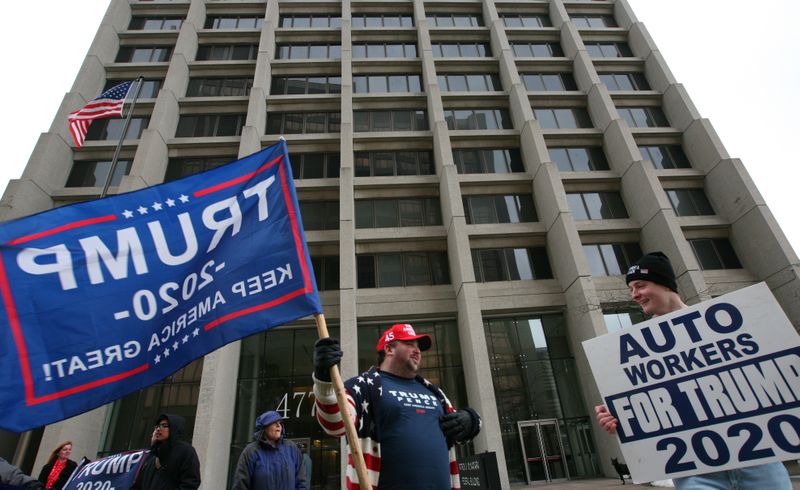 LIVONIA, Mich. (Reuters) - Ask Victor Burch about the impeachment trial of President Donald Trump, and he will rattle off a string of issues of more pressing concern to him, starting with making a living as a barber in this northwestern suburb of Detroit.

Burch, an undecided African-American voter, added: "Close up the barber shop and say: 'Let's just sit and hold hands and watch and see if Trump is going or not'? We can't do that. We don't live in that type of tax bracket."

Voters like Burch and places like Livonia will be at the epicenter of November's presidential contest. Michigan itself is a crucial battleground state that Trump carried unexpectedly in 2016 by about 11,000 votes, propelling him to the White House along with wins in Pennsylvania and Wisconsin.

But interviews with two dozen voters in Livonia over recent days showed that months of impeachment hearings, testimony and political storms in Washington had done almost nothing to alter their views. Instead, many were focused on issues of the day, such as jobs, healthcare, immigration and education.

In some ways, the suburb is a microcosm of the country, with opinion polls showing that support for removing Trump for office is largely split along party lines.

While the presidential impeachment proceedings, which have culminated in just the third such Senate trial in U.S. history, have consumed Washington, many voters across the country, including in Michigan, see the outcome as a foregone conclusion, with the Republican-controlled Senate unlikely to convict.

Trump has remained defiant and denied wrongdoing in the face of Democratic accusations that he abused his office by pressuring Ukraine to investigate former Vice President Joe Biden, a leading Democratic contender seeking to challenge him in the Nov. 3 election.

When Reuters visited Livonia in October, just weeks after the U.S. House of Representatives' decision to launch a formal impeachment inquiry into Trump, interviews with voters at the time showed they were dug in on the issue.

Steve King, 65, who plays Democratic and Republican political events in Michigan with his band, Steve King and the Dittilies, said nothing he had seen since then had altered his view. He called the Senate trial "kind of pointless".

"There's a sense of frustration. You're doing all this and it's not going to change anything," said King, a self-described independent political junkie who plans to vote for whoever emerges as the Democratic nominee.

His advice for the Democratic presidential candidates: "Trump is Trump. You have to ignore him completely and just focus on the policies."

That seems to be just what Democratic Party officials in Michigan and volunteers in the state for the Democratic presidential contenders are doing.

Larry Nearhood, a 31-year-old volunteer for Pete Buttigieg's presidential campaign from the northern Detroit suburb of Huntington Woods, said that in his conversations with voters, impeachment was an afterthought.

"It mainly only comes up after we're done talking about everything else," Nearhood said. "It's just in the background."

Local Trump backers are more willing to call attention to impeachment, hoping it will help the Republican president on Election Day.

While Democrats charge that Trump abused his power in the Ukraine affair and obstructed Congress in its investigation, his defense has warned against removing a president less than 10 months before Americans vote on whether to give him a second term.

"A majority will not have their minds switched," said Ben Hirschmann, 24, from Fraser, who gathered in downtown Detroit on Saturday with about two dozen other Trump supporters from the suburbs to protest the impeachment.

Hirschmann, who was wearing an American flag sweater and waving a 'Trump 2020' flag, said he had not been moved by the trial.