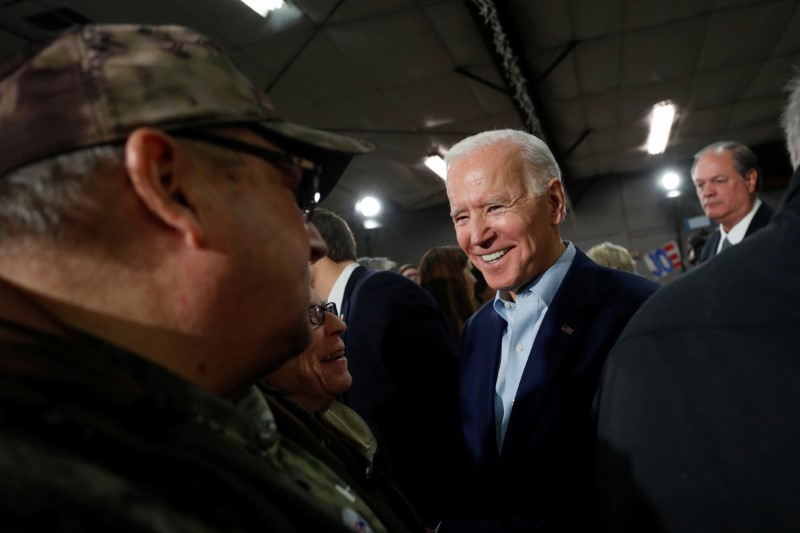 WASHINGTON (Reuters) - With the first votes in the 2020 Democratic nominating contest less than two weeks away, former Vice President Joe Biden on Wednesday received a welcome endorsement from the national iron workers union.

The 130,000-member International Association of Bridge, Structural and Ornamental Iron Workers said it was tapping Biden over the other 11 Democratic candidates in the race because of his past work supporting infrastructure projects.

“Vice President Biden has proven again and again that he is a friend to union ironworkers,” said Eric Dean, the union's general president, in a statement. “We need a president who will defend rights and jobs of American workers, and Joe Biden will be that president.”

Biden, who served two terms under former President Barack Obama, has been primarily battling U.S. Senators Bernie Sanders and Elizabeth Warren for state and union endorsements, which are coveted by campaigns for their capacity to rally working-class voters to the polls.

Earlier this week, Sanders won the backing of a key California union, a 17,000-member chapter of the Communications Workers of America.

The first Democratic nominating contest will be held in Iowa on Feb. 3. Polls show Biden, Sanders and Warren locked in a tight race in the state.

The winner of the Democratic nomination will face President Donald Trump in the November general election.