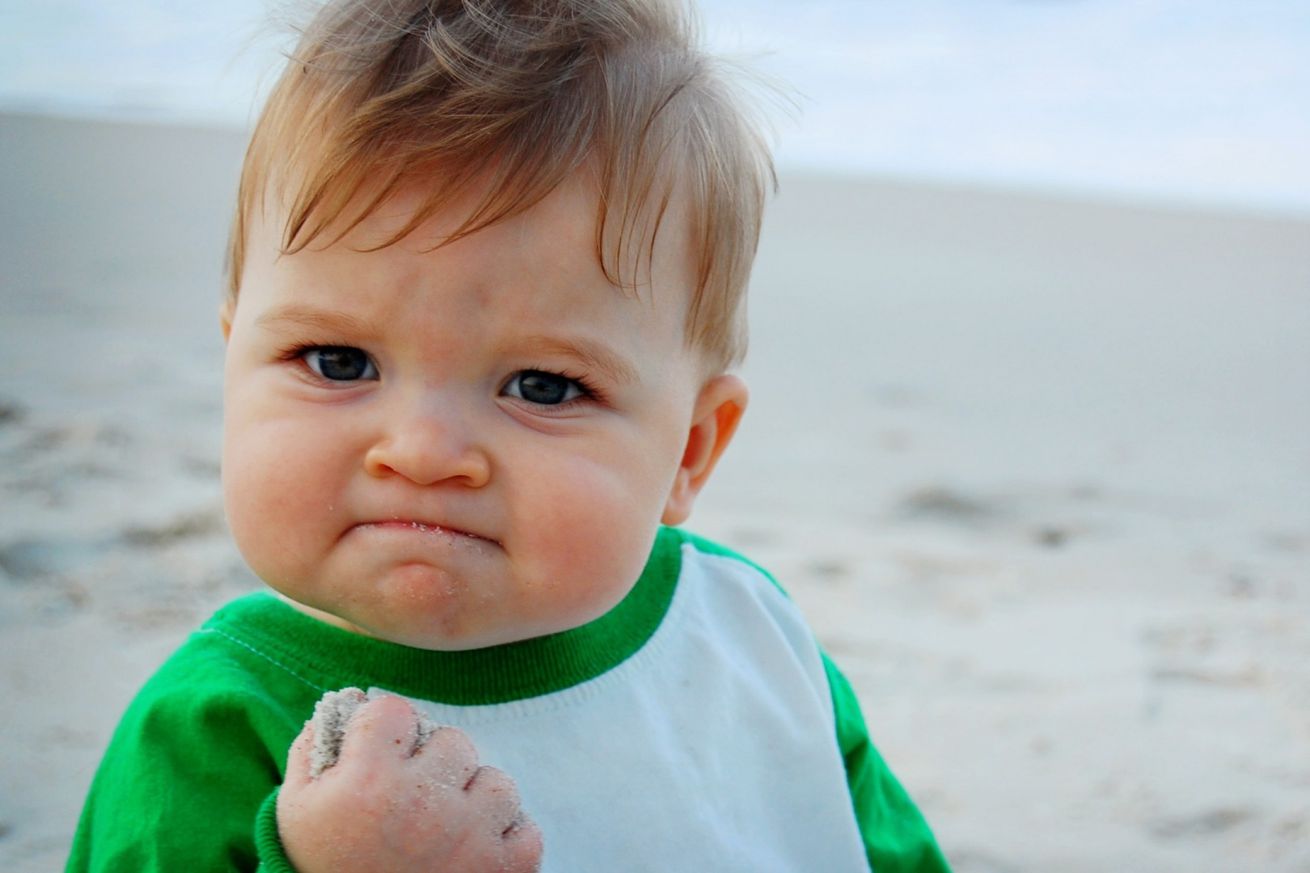 The mother of “Success Kid” Sammy Griner has sent a cease-and-desist notice to to Rep. Steve King, who she called a “vile man” for using the viral image of the toddler with a clenched fist as part of fundraising efforts. Laney Griner is threatening to sue the Iowa Republican for copyright infringement. But copyright law around viral memes is a gray area that still has not seen its day in court.

The Success Kid image appeared in an online ad for campaign donation platform WinRed, asking for donations to “fund our memes.” Griner tweeted a screenshot of the image on King’s official Facebook page. We weren’t able to find the post on King’s page as of Tuesday morning.

Just so it’s clear - I have/would never give permission for use of my son’s photo to promote any agenda of this vile man or that disgusting party. https://t.co/AVdl9dxXCs

Griner and her attorney are demanding that King remove any Success Kid images from sites affiliated with him or his campaign by 9AM PT Wednesday, and display a notice that the image was used without permission for 90 days on any site where the meme appeared. They also want to see accounting for any funds raised with the image, for the donations to be refunded, and for King to notify donors that Success Kid is not affiliated with King or his campaign.

If the conditions are not met, the cease-and-desist letter states, Griner will file suit against King, WinRed, and the King campaign.

King did not reply to an email seeking comment.

Here’s a copy of the cease-and-desist letter Griner’s lawyer provided to The Verge:

Griner first uploaded the image of then-11-month-old Sammy eating sand on a beach and wearing a determined expression on his face to her Flickr page in 2007. The following year, the photo began appearing on MySpace, often with the caption “I Hate Sandcastles.” It later became a kind of “advice animal” meme, used to signal victory over an obstacle, and evolved into what became known as the Success Kid meme.

After first licensing the image to Getty, Griner registered a copyright for the image in 2012, the cease-and-desist letter states. Since then, it’s been licensed for use in various television commercials, and the Obama campaign used it in 2013 as part of an immigration reform campaign. But also, Griner sued a fireworks company for using the image in 2015 without permission, settling the matter out of court.

“Our client has a long-established history of licensing ‘Success Kid’ to legitimate advertisers,” Griner’s attorneys wrote in the letter to King. “Unlike you and your campaign, they followed the law, gave our client the opportunity to approve or disapprove of their uses, bargained for licenses, and paid for the rights they legitimately acquired.”

The legal question of who owns a meme has not been fully tested; several high-profile lawsuits were settled or dismissed before going to court. In March, plaintiff Olorunfemi Coker filed a lawsuit against Jerry Media accusing the @fuckjerry Instagram account of violating his copyright by using a meme to promote tequila; Coker dropped the suit days later. And in June, right-wing website Infowars settled a lawsuit with artist Matt Furie, creator of the Pepe the Frog image. He accused the website of infringing on his copyright by selling posters with the Pepe image. Infowars agreed to pay Furie $15,000 and to stop using the image.

The question of who owns the rights to a meme remains fuzzy, says Meredith Rose, a policy attorney with nonprofit organization Public Knowledge who specializes in internet copyright issues. If an image goes viral and the image owner doesn’t do anything to protect the image, then the owner has implied they’re okay with any uses, Rose tells us. This theory is called an “implied license.”

But Griner has used the copyright on Success Kid to actively control where and how it appears. As the copyright holder, Griner is within her rights to try to prevent any uses of the Success Kid image, Rose says. “The interesting thing to me is she has clearly managed the licensing and made an ongoing series of decisions about who can use it,” she says.

In a similar case, a National Geographic photographer’s image went viral as the “Socially Awkward Penguin” meme. But that image’s license was held by Getty Images — which pursued compensation from websites that used it without permission.

“Usually copyright holders use discretion about how they allow their images to be used,” Rose says. So most image rights holders don’t go after every cosplayer or hobbyist who may be technically violating a copyrighted work. While most people assume the fair use of an image should be decided by the “did you make money from it?” litmus test, Rose says that’s more of a social or moral judgment, not necessarily what the law says.