Home World News Invasion Day is a day of mourning for Indigenous Australians. The bushfires make this year extra poignant.

Invasion Day is a day of mourning for Indigenous Australians. The bushfires make this year extra poignant. 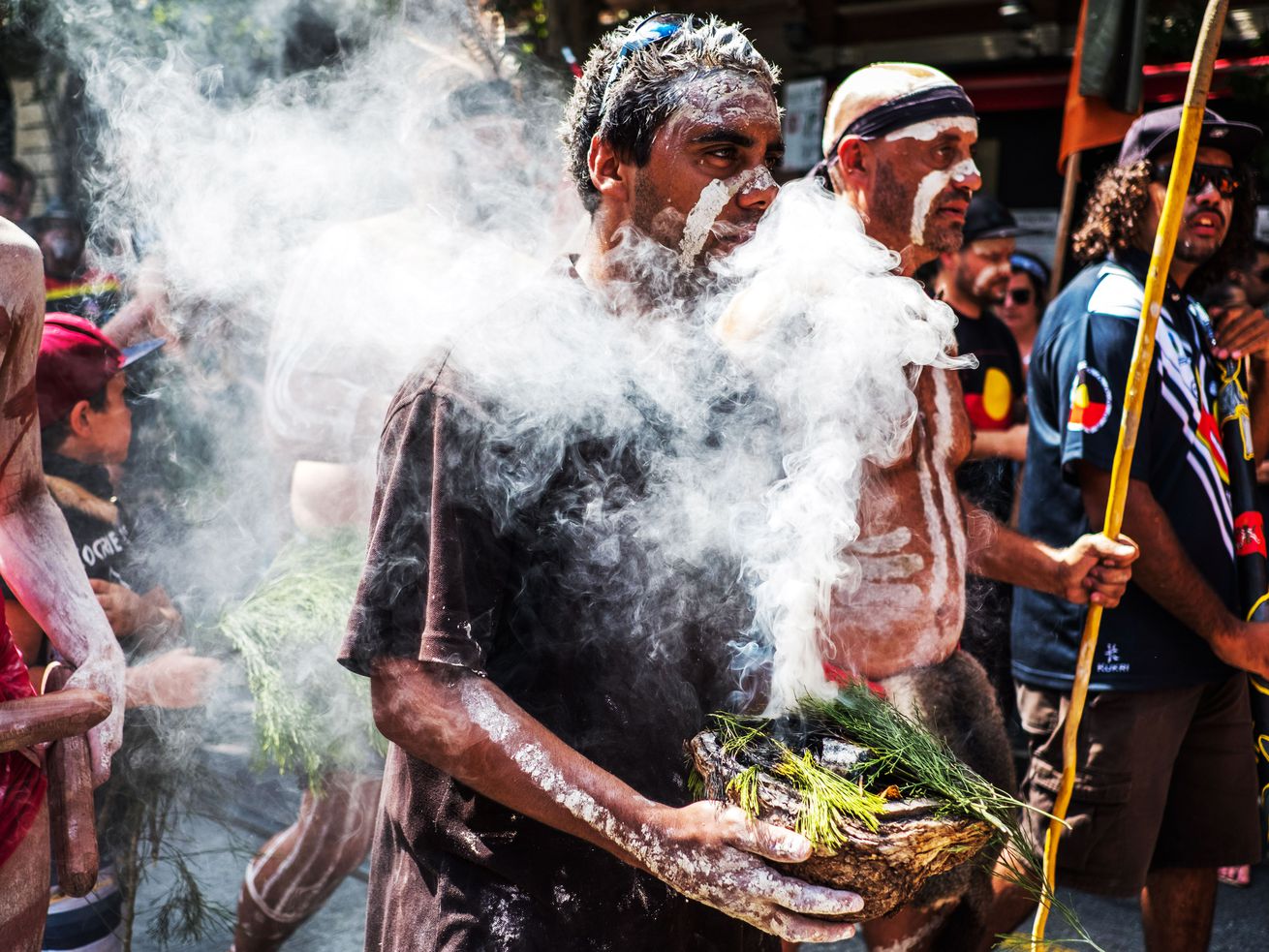 The deep connection between the fires, colonization, and Aboriginal protest, explained.

The raging bushfires in Australia have been unimaginably devastating for the whole country — at least 29 people have been killed, over 2,500 homes and 27 million acres have gone up in flames, and 1 billion animals are estimated dead.

What has received far less attention in the media is how the fires have affected the Aboriginal and Torres Strait Islander communities. The fires are concentrated in New South Wales, which is home to the largest population of Indigenous people in Australia.

NPR reports the Nuragunya Aboriginal culture and education camp in the region has been destroyed. Meanwhile, the Yuin people in Mogo — a community southeast of the Australian capital of Canberra — lost their council building in the flames, along with “invaluable ceremonial items in addition to ecological data they were collecting to digitally archive along with relevant cultural history,” Earther reports.

And while the full extent of the damage has yet to be assessed, the Yuin people estimate that hundreds of their sacred sites — many of which are thousands of years old — have burned.

We cannot mourn these horrifying losses without acknowledging the violence that made it possible. All over the world, the climate crisis is linked to the colonization, land theft, and oppression imposed upon Indigenous people.

“Seeing the effects of climate change on our landscape, my people are angry!” Bee Cruse, a Wiradjuri, Gomeroi, and Monaroo-Yuin storyteller, tells Vox. “The sky was red, black ash fell like snow, and smoke choked the whole East Coast — even New Zealand felt the effects of our fires. All while the government keeps selling our water and land, all for some coin.”

Larissa Baldwin, from the Widjabul clan of the Bundjalung nation and the First Nations justice campaign director of the movement GetUp, told Vox she worries about the trauma the bushfires will continue to have on Aboriginal communities. “I’ve heard stories from kids about the fire fronts coming over in the middle of the day at lunchtime, and the whole sky going black,” she told Vox. “It’s incredibly terrifying, and everybody’s scared.”

The climate effects on Indigenous communities is why, when the nation observes the country’s “founding” on Australia Day on January 26, Indigenous and Torres Strait Islander people say it’s important to recenter it as Invasion Day. It’s an occasion for mourning and protest, not celebration, they say. And this year’s bushfires make that meaning even more significant — and the need for allies to show solidarity more urgent.

Since the near beginning of human history, for 60,000 years, Aboriginal people kept and cared for the huge mass of land we call Australia. Then on January 26, 1788, Britain’s First Fleet landed in Sydney Harbor, marking the beginning of European colonization.

The nation has come to celebrate that day as a time of joy and patriotism, even making it the date when new citizens receive their Australian citizenship.

But in reality, it is an unimaginably painful day for Aboriginal and Torres Strait Islander people, especially in the wake of the bushfires.

“We see and feel the spirit of our animals and our land, they are our ancestor spirits,” Cruse says. “We don’t own country, country owns us; we come from her to protect her. When country hurts, we hurt. When our animals, our spirit cousins, cry, we cry.”

Add to the spiritual and physical devastation the disproportionate negative health outcomes that many Aboriginal and Torres Strait Islander people face. According to the Overview of Aboriginal and Torres Strait Islander Health Status in Western Australia, the death rate for Indigenous people in Western Australia was 2.1 times higher than non-Indigenous people between 2015 and 2017. And between 2012 and 2013, they were 2.6 times as likely as non-Indigenous people to feel high levels of psychological distress.

“We just don’t have the resources in this country to deal with the mental health issues, let alone the issues around respiratory illness within our communities, and we already have a suicide epidemic,” Baldwin said. “What is the impact of these fires on our health?”

Like so many other Indigenous communities and colonized people, this pain is sharper because of the history behind it — the history that began on Invasion Day. With European colonization came land theft and environmental degradation; according to the World Wildlife Fund, Australia is currently one of the world’s worst polluters. Colonization also led to the “Stolen Generations,” when at least one in three Aboriginal and Torres Strait Islander children were forcibly removed from their families between 1910 and the 1970s, to be confined in institutions or raised by white families. This was a practice meant to “breed out the color” — an act of “biological and sociocultural genocide,” according to scholar Jessica Schimmel. It led to the oppression Aboriginal and Torres Strait Islander people still face today, experiencing mass incarceration, houselessness, poverty, murder, and sexual violence.

And it contributed, without proper respect and care of the land, to these destructive bushfires.

Ruby Wharton, a Gamilaraay and Kooma Murdie student activist, tells Vox, “Without native ecology being preserved, we lose the very essence of our identity. Our totems, our songlines, our sacred ceremony sites that remain ... our very existence is under threat. Nothing in the last 250 years has changed. White Australia is still trying to erase us. It’s never stopped.”

This painful past and terrifying present is why so many Aboriginal and Torres Strait Islander people feel it is an act of violence to praise the day Europeans came and took their land.

But many in power — particularly conservatives like current Prime Minister Scott Morrison — refuse to have compassion for this, insisting that Invasion Day must legally remain “Australia Day.”

”I’m not just going to not change it, I’m going to ensure it doesn’t get eroded ... That’s our historical day and we need to work together, to come together on that day to ensure that we can make it an important day for all Australians,” Morrison said last year.

Even after local councils attempted to make changes to better respect Aboriginal and Torres Strait Islander peoples’ wishes, Morrison banned them from holding the citizenship ceremonies on any day other than January 26.

Regardless, this Sunday, many Aboriginal people will choose to resist and to mourn. But they won’t celebrate.

Colonization has not only had an impact on the start of the fires, but also on how the fires have been handled.

In Australia — as well as in the Amazon rainforest, the Congo, and Northern California — blatant disregard for Indigenous land management practices has contributed to the burning of the forests, the destruction of Indigenous culture, and the deaths of many people and animals.

In a New York Timesop-ed, Alexis Wright, member of the Waanyi nation and a professor of Australian literature at the University of Melbourne, wrote that the best way to combat these destructive fires is to listen to those who have cared for the land the longest. Wright points out that there are many ways Aboriginal people have managed fires by using “skillful” burning, like the mosaic cool-fire technique, which uses low-intensity fires to clear underbrush, making future fires less chaotic and giving animals time to get away. It also allows new vegetation to flourish and regrow.

“[O]ur knowledge of caring for the land is questioned or largely ignored. In the face of catastrophic fires, Australia’s leaders need to recognize the depth and value of Aboriginal knowledge and incorporate our skills in hazard management,” Wright wrote.

Traditional burning is an incredibly delicate and skilled process. It involves assessing every aspect of the land — moisture, habitat, vegetation, presence of invasive species — and tailoring the fires to suit a specific purpose. People who implement cultural burning not only guide the temperature of the fire, but its shape, size, direction, intensity, and duration.

Many Indigenous groups all over the country are taking back control in their own way, using their deep knowledge of the land to try to heal it. The Lake Tyers Aboriginal Trust CFA, an all-woman Indigenous fire crew made up of mothers and grandmothers, have volunteered to serve as first responders to surrounding bushfires in the area. As there is no national fire service, fire management is up to each state and territory. Seeing the value of Indigenous knowledge, some local areas like the New South Wales Rural Fire Service, for instance, have started relying on Indigenous communities’ knowledge of cultural burning.

“If these fires have taught me anything, it’s to get back to country, learn the skills of our old people to best take care of country, and invoke their strong, radical spirits to conjure up the courage to stand up against a government who don’t know how to care for the country we were born to take care of,” Cruse says.

Allies, meanwhile, can advocate for policies that will help prevent these ecological disasters from occurring again. Wright has called for a national Indigenous burning program, in which Indigenous people lead land and hazard management in the country using the techniques their ancestors used to keep Australia safe for tens of thousands of years.

Non-Indigenous people can also pay reparations or “pay the rent” to Aboriginal and Torres Strait Islander people. There is no formal system in place at the moment, but resources can be given to these grassroots organizations that are doing direct action in response to the fires. Wharton acknowledges that the idea of reparations might be uncomfortable to some, but she says, “Unfortunately, you can’t fight systemic racism and build independent communities with words. If money is not something that you can contribute, your time and expertise will go a long way and is always valued.”

Baldwin tells Vox she feels the most impactful thing allies can do in Australia right now is show up at Invasion Day events and amplify Aboriginal and Torres Strait Islander people who are doing work on these issues. Protests are happening all over Australia on Sunday, like the Tandanya Survival Day and Concert in Adelaide or the Invasion Day March in Sydney.

“This is a climate crisis, but this is a climate crisis caused by colonization and mismanagement of land,” Baldwin says. “If you really want to start to show solidarity with First Nations people and talk about our loss, our grief, injustice, and what we need, then you should turn out on January 26th with us.”

Nylah Burton is a Denver-based writer. She covers mental health, social justice, climate, and identity. You can follow her on Twitter.