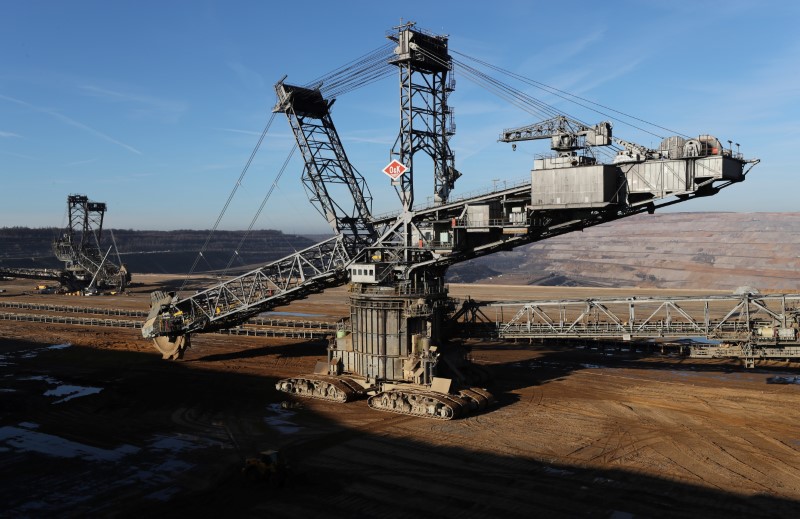 FRANKFURT (Reuters) - Germany imported 40.2 million tonnes of hard coal last year, 14.7% less than in 2018 due to competition from renewables and gas, and as the steel industry curbed usage, importers said on Friday.

The total was comprised of an estimated 7.4% lower intake of coking coal for steelmakers, who purchased 11.5 million tonnes and a 15.5% fall in purchases of coke, a related product, of 1.9 million tonnes, lobby group VDKI said at its annual meeting.

Thirdly and most significantly, purchases by coal-to-power generators, the biggest user group, fell 17.4% to 26.8 million.

"Coal is being pushed out not only by renewable energy, there is an additional price competition with natural gas while carbon emissions permit prices are rising," said the group's managing director, Franz-Josef Wodopia.

Emissions allowances are a mandatory input for power generators.

Their prices have increased strongly amid political moves to tighten supply, in order to raise prices and incentivize the avoidance of more CO2 pollution.

Coal consumption was also hit because of the ongoing expansion of wind and solar power plants in the green energy transition, which are driven by the weather and whose output volumes are given priority on transmission grids.

VDKI did not give an import forecast for 2020.

Policymakers on Thursday finalised details of a long-term exit plan from burning domestically mined brown coal up to 2038 due to be passed by the cabinet by the end of this month.

VDKI criticized planned stipulations relating to phasing out sizeable hard coal capacity by 2026 and more still by 2030 and finally 2038. Known since last year, the plans may or may not be passed along with those for lignite.

It said the potential of emissions savings achieved this way could be outweighed by coal operators elsewhere in Europe producing more, while energy prices in Germany would go up.

As for the trend of coal's demise, other industry data have recently mirrored those described by VDKI.

The primary energy mix, beyond power generation, describes usage of all fuels for use in transport, heating and industries, including nuclear energy, as well as mineral oil and products.