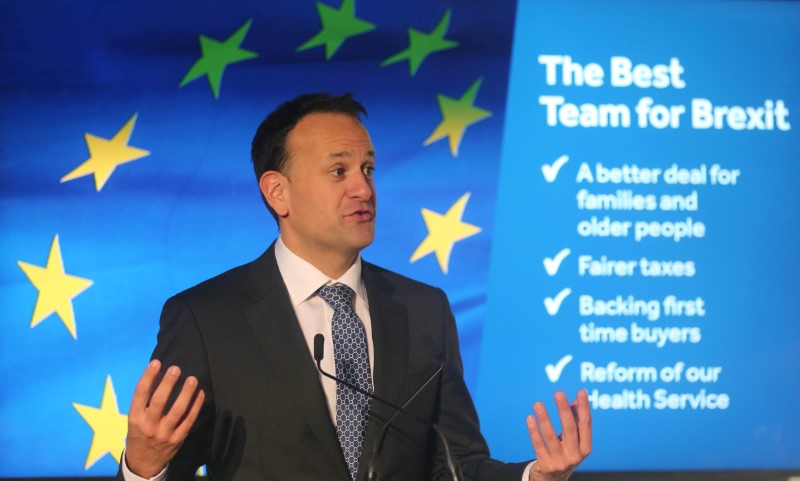 DUBLIN (Reuters) - Ireland's two largest parties, the governing Fine Gael and main opposition Fianna Fail, laid out their economic policies in election manifestos on Friday ahead of a Feb. 8 poll.

Polls suggest Fianna Fail may lead another minority government propped up by Fine Gael from the opposition benches, as Fianna Fail has done since 2016.

Here are some of the parties key fiscal policies:

Both parties have committed to staying within the 11 billion euros that Ireland's finance ministry forecasts will be available for tax cuts or additional current spending for 2021-2025. Fianna Fail says it will hold back 1.2 billion euros to account for demographic pressures and public pay increases beyond what the finance ministry has allowed for.

Fianna Fail would favor a 4:1 ratio of new spending to tax cuts, while Fine Gael has committed to a 3:1 ratio in favor of spending.

Both are in favor of cutting income tax rates, but Fine Gael more so. Its policy centered around increasing the threshold at which workers pay the highest rate of income tax to 50,000 euros from 35,300 euros will leave an average earner just under 3,000 euros better off by 2025, the party says.

Fianna Fail's plans to increase the standard rate income tax band by 3,000 euros for a single person and 6,000 euros for a couple will put almost 1,400 euros back in the pocket of someone earning just under the average full-time wage.

Fianna Fail says it will reduce the capital gains tax rate to 25% from 33%. Fine Gael will review the rate at each budget over the next five years.

Fine Gael and Fianna Fail are committed to retaining the low 12.5% corporation tax rate, long a magnet for multinational firms like Apple (O:AAPL), Google (O:GOOGL) and Facebook (O:FB), among the country's largest employers. They also back the Organisation for Economic Cooperation and Development (OECD) as the forum for global tax reforms, rather than any action at an EU level.

After emerging as an unexpected election issue, Fianna Fail has said that pending a review, it will defer a planned increase in the pension age to 67 in 2021 at a cost 217 million euros. Fine Gael recommitted to moving the qualifying age to 67 from 66 in 2021 and to 68 in 2028.

Both parties plan to increase the state pension by 25 euros a week over the next five years.

In a bid to help prospective buyers now paying record-high rents - another big election issue - Fine Gael said it would boost its tax rebate for first-time buyers to 30,000 euros from 20,000 euros. Fianna Fail would increase the limit to 25,000 euros while also introducing a savings scheme where the state would provide up to 10,000 euros more if a buyer saved three times that amount.

Both parties have committed to making an annual deposit to the state's new contingency reserve set up to shield the treasury from potential future shocks. Fine Gael would add 500 million euros a year, Fianna Fail 750 million euros.

The two parties say they will work to secure the closest possible trading relationship with Britain that would also retain a level playing field on regulations after Brexit.