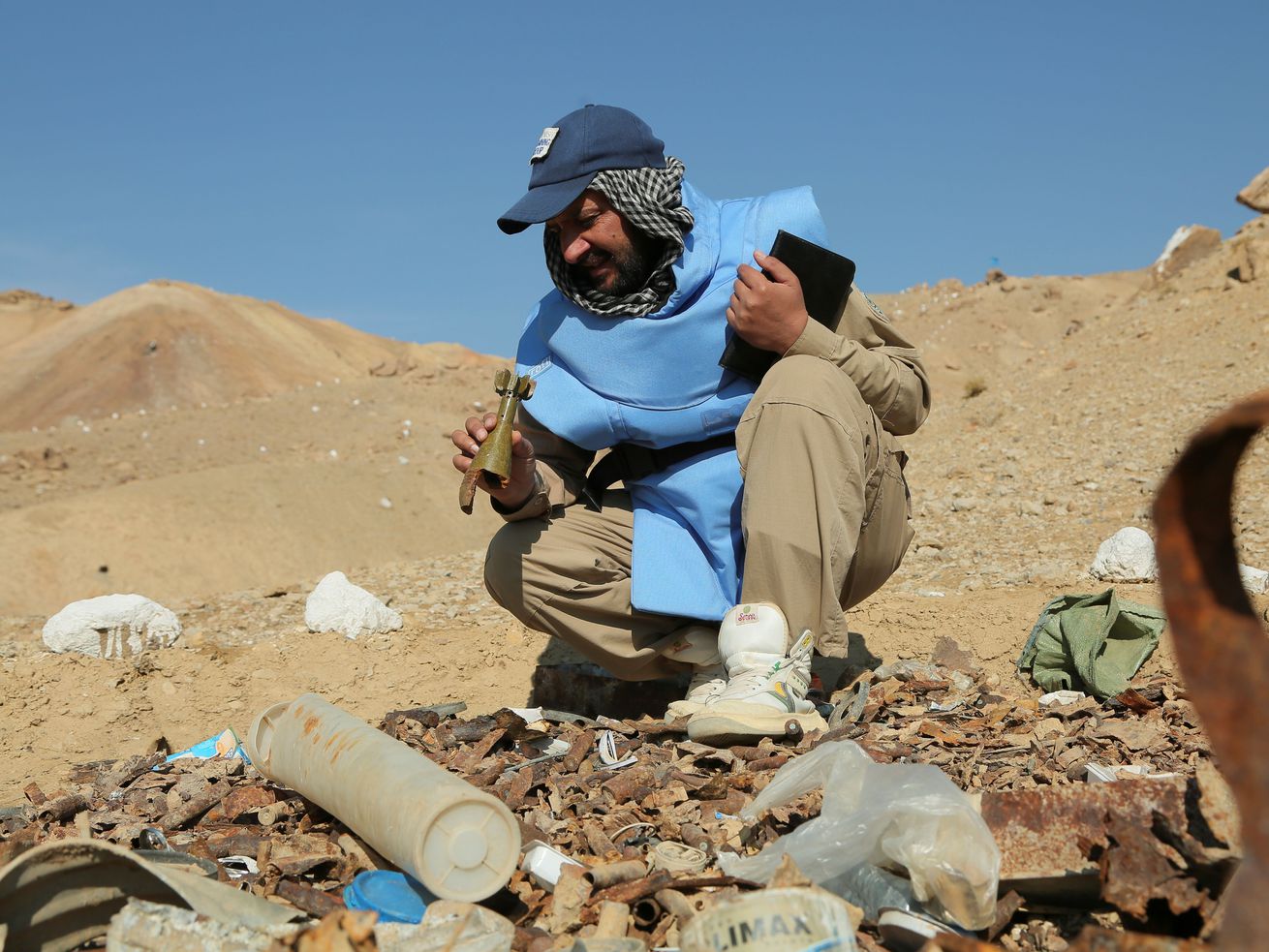 In this photograph taken on November 14, 2019, an Afghan deminer working for the Danish Demining Group holds a mortar bomb during the scanning of a combat zone dating back to the Soviet invasion at Ahangaran in the central Afghan province of Bamiyan. | Mohammad Ali Shaida/AFP via Getty Images

This reverses an Obama administration restriction on landmine stockpiles and use in war.

In yet another reversal of an Obama-era policy, President Donald Trump will allow the US military to again use landmines in conflicts around the world.

According to an internal State Department cable obtained by Vox, Trump has rescinded former President Barack Obama’s 2014 directive to no longer “produce or otherwise acquire any anti-personnel landmines,” known as APLs, which are small explosive devices placed under, on, or near the ground. The cable also lifts the Obama administration’s restriction on deploying landmines outside of the Korean Peninsula.

Landmines are a particularly gruesome weapon. If a person triggers a landmine by stepping on it and survives, the severe injuries typically require the amputation of limbs or multiple operations. The International Committee of the Red Cross reports that “war surgeons consider them among the worst injuries they have to treat.”

The Landmine Monitor, a watchdog group, says that there have been roughly 130,000 casualties due to landmines between 1999 and 2018, the majority of which have been civilians.

More than 160 countries have signed on to the 1997 Mine Ban Treaty, which prohibits the use, stockpiling, production, and transfer of anti-personnel landmines. The US, however, has never signed it.

Obama’s 2014 directive restricted landmine use to just the Korean Peninsula, “to reduce humanitarian harm,” according to Rob Berschinski, who worked in the human rights office of Obama’s National Security Council.

But Obama declined to ban them outright. The reason, Berschinski said, was that the Pentagon felt there were still reasons to use landmines on the Korean Peninsula, mainly to thwart a potential North Korean invasion.

But under Trump’s new policy, the US military can now use landmines anywhere, including in “future potential conflicts,” according to the cable.

“The United States will not sacrifice American service members’ safety,” the cable reads, “particularly when technologically advanced safeguards are available that can allow landmines to be employed responsibly to ensure our military’s warfighting advantage, while also limiting the risk of unintended harm to civilians.”

Importantly, the cable also notes that the US will continue to “prohibit the use of any ‘persistent’ landmines” that don’t have a self-destruct or self-activate function.

This is a dramatic policy change, and one that has arms control experts and humanitarian groups deeply concerned. “It is a complete flouting of established international norms, a smack in the face to civilians at risk from long-existing stockpiles, and breaks with decades of precedent,” said Rachel Stohl, an arms control expert at the Stimson Center think tank in Washington.

But it’s unclear whether the military even wanted this change in the first place. Multiple experts — including US defense officials — said that the US military has clearly found anti-personnel landmines not to be that helpful in war.

“The United States has not used landmines in a new theater of military operation for nearly thirty years — since 1991 — yet it continues to stockpile millions of these obsolete weapons,” Daryl Kimball, the executive director of the Arms Control Association, told me.

It’s therefore worth noting that Trump’s soon-to-be-announced action may not change much on the battlefield, and may have been done just to remove another Obama-era restriction.

The administration will officially announce the decision on Friday after briefing allies on the policy change, according to the cable. “There is a change coming out, but I’m not going to comment on it before it is,” Secretary of Defense Mark Esper told reporters on Thursday morning.