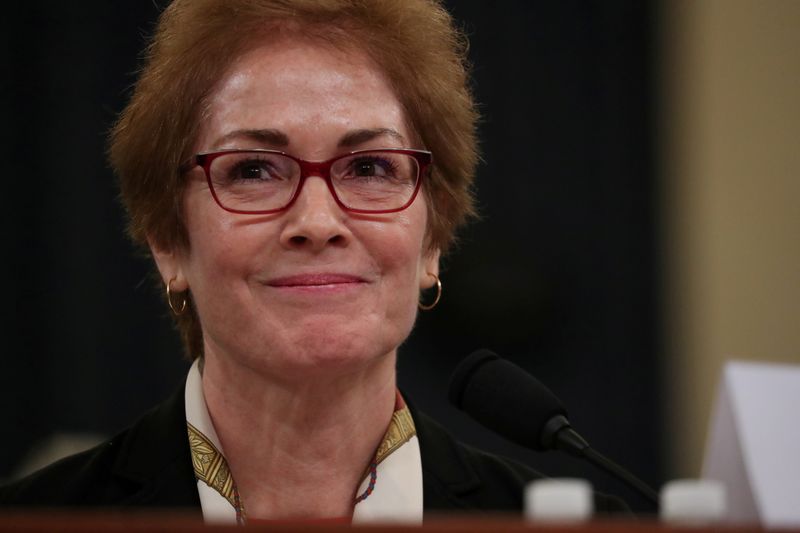 WASHINGTON (Reuters) - Halfway through a dinner at the Trump Hotel, U.S. President Donald Trump can be heard giving the order to remove the U.S ambassador to Ukraine, Marie Yovanovitch, according to a video that surfaced on Saturday.

The video, obtained by Reuters from Lev Parnas' attorney Joseph Bondy, begins with Trump posing for photos then entering a room with a table set for 15 including a close-up of the president's place setting.

The video from April 2018 lasts 83 minutes and most of it shows no images of the participants as the camera was pointed at the ceiling. Excerpts of the taped encounter were published on Friday by ABC News.

The White House did not respond to a request for comment.

Trump has said he had the right to fire Yovanovitch, a main figure in the series of events that led to his impeachment. Trump fired her in May 2019 and he told Fox News on Friday that he was "not a fan" of Yovanovitch.

Democrats say Trump associates spent nearly a year trying to oust Yovanovitch because they saw her as an obstacle in their efforts to pressure Ukraine into investigating Trump's political rival in the 2020 election, Joe Biden.

Parnas, a former associate of Trump lawyer Rudy Giuliani, had recounted the conversation in media interviews last week. Trump has said that he does not know Parnas.

After the ABC report on Friday, Parnas found a digital recording of the comments, Bondy said, and sent it to the House Intelligence Committee, which is continuing to investigate Trump's conduct.

"I was particularly gratified to see that everything Mr. Parnas has been stating about that event was true," Bondy said, referring to the April 30, 2018 dinner. "It is yet another example of Mr. Parnas' version of events being corroborated by evidence in the form of recordings, emails, text messages."

Parnas, a Florida businessman, has been providing evidence to Democrats now pushing for Trump's ouster at his impeachment trial in the Senate. He played a key role in Giuliani's effort to dig up dirt on Biden in Ukraine for Trump. He is now under indictment for campaign finance violations in a separate criminal case.

Other attendees at the dinner were Trump's son, Donald Trump Junior and Parnas' associate Igor Furman, according to a shot of his place setting.