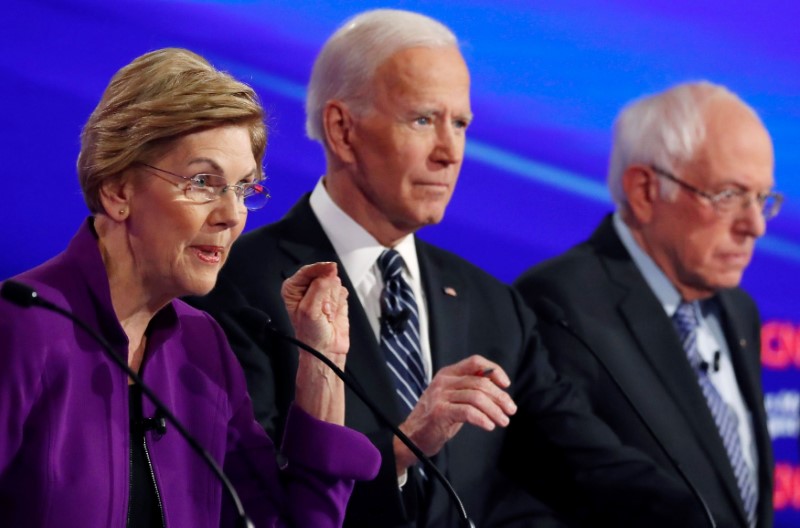 DES MOINES, Iowa (Reuters) - In the wake of a flap with Democratic rival Bernie Sanders over gender and electability, Elizabeth Warren made no direct mention this weekend in Iowa of the history-making potential of her candidacy as a woman seeking the White House.

That suited many women attending her events ahead of the state's Feb. 3 caucuses just fine.

The approach may seem at odds in the era of an energized womens' movement that has marched against Donald Trump's presidency, raised awareness against sexual assault through the #MeToo campaign and sent a record number of women to the U.S. Congress.

But in two dozen interviews during Warren's latest Iowa campaign swing, some women told Reuters such progress is the reason it is no longer necessary for women candidates to make overt, gender-based appeals.

Others worried emphasizing gender could be a liability for a party chiefly concerned with picking a nominee who can beat Trump in this November's general election.

"It's time for a woman in the White House," said Janet Luett, 65, who is weighing whether to back Warren or fellow U.S. Senator Amy Klobuchar. But the retired nurse was glad Warren did not focus on gender at her event on Monday in Grimes, Iowa.

Debating in the state last week, Warren stood by her claim that Sanders told her during a 2018 meeting that a woman could not beat Trump. Sanders denied it, prompting Warren to accuse him after the debate of making her out to be a liar.

Back on the campaign trail Warren, the first woman elected to the U.S. Senate from Massachusetts, said she was done talking about the disagreement with her fellow progressive rival.

She instead infused her stump speeches with subtle references to how gender shaped her life: attending law school with "baby on hip," graduating while visibly pregnant, struggling as a single mother.

She also repeated a favorite line that she has looked at what a president could do "by herself" without Congress to get the country on track.

Warren "may not say often that it is important to elect a woman, but she certainly shows how being a woman might shape the perspective, experience or understanding that she's bringing to policy making," said Kelly Dittmar, a scholar at the Center for American Women and Politics at Rutgers University.

Most women who spoke to Reuters had trouble articulating why gender could be a vulnerability in this year's primary election, other than expressing unease that perhaps general election voters are not ready for a female president.

"It's a little bit of a liability, especially with the older generation," said Barb Waldron, 77, who nevertheless planned to caucus for the first time in more than 40 years for Warren.

Some said Clinton already had broken a barrier by becoming the first woman presidential nominee of a major U.S. political party.

"It's opened the door wide open for a woman to be a viable candidate," said Alexa Earlywine, 30, a nurse who plans to caucus for Warren.