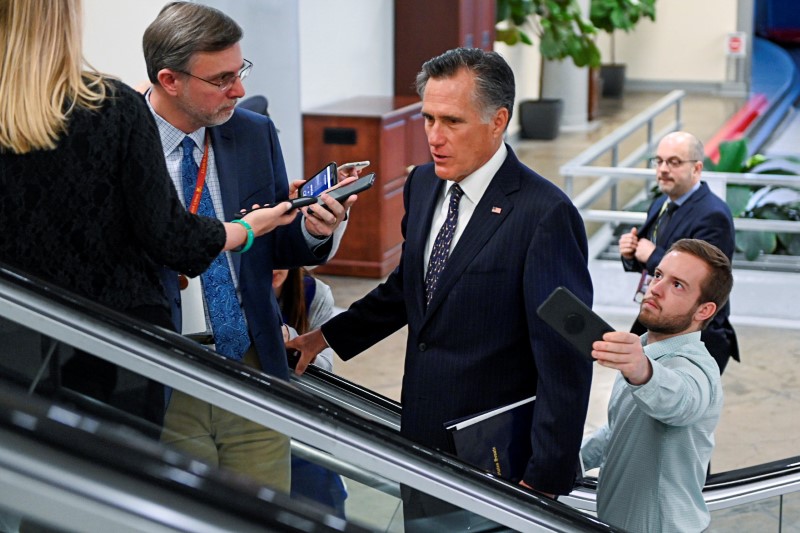 By Susan Cornwell and David Morgan

WASHINGTON (Reuters) - U.S. President Donald Trump was the ringleader of an effort to coerce Ukraine to dig up dirt on a domestic political rival, "worked hard" to cover it up and has shown no remorse, Democratic lawmakers said on Friday in his impeachment trial.

In their third and final day of opening arguments, Democrats tried to cement their case that Republican Trump had abused his power by pressuring Kiev to investigate Joe Biden, a former U.S. vice president and a contender for the 2020 Democratic presidential nomination, and then obstructed Congress' inquiry into the matter by barring witnesses and withholding documents.

The Democratic-led House of Representatives last month passed two articles of impeachment, setting the stage for a trial in the Republican-led Senate on whether to oust Trump before he seeks a second term in a November election.

It is the third such proceeding in U.S. history.

Representative Hakeem Jeffries, one of the House managers prosecuting the case, said Trump was "calling the shots" in soliciting Ukraine's interference in the 2020 U.S. election and others in the White House assisted him in trying to hide evidence of the misconduct when it was exposed.

"President Trump tried to cheat, he got caught and then he worked hard to cover it up," said Jeffries, who added that there was a "toxic mess" in the White House that needed to be cleaned up on behalf of the American people.

Trump denies any wrongdoing and describes the impeachment as a hoax.

Democrats have accused Trump of pressuring Ukrainian President Volodymyr Zelenskiy in a July 25 phone call to investigate Biden and his son Hunter, who served on the board of Ukrainian energy company Burisma.

They say Trump temporarily withheld $391 million in U.S. military aid to Ukraine as leverage for his demands.

Trump's allies have argued his conduct does not rise to the level of an impeachable offense. The U.S. Constitution sets out the impeachment process for removing a president who commits "high crimes and misdemeanors."

"He has shown neither remorse nor acknowledgement of wrongdoing," said Democratic Representative Adam Schiff, who has spearheaded the prosecution of Trump in the trial. "Do you think if we do nothing, it's going to stop now?"

Democrats this week have outlined their charges that Trump only grew interested in corruption in Ukraine when it appeared that Biden could become a serious political threat.

ABC News said on Friday it had heard an audio recording from April 2018 in which Trump is heard saying he wants the dismissal of then-U.S. ambassador in Ukraine, Marie Yovanovitch.

Trump made his remarks while speaking to a small gathering of people that included Lev Parnas and Igor Fruman, two former associates of Trump's personal lawyer Rudy Giuliani, ABC News reported. Parnas and Fruman have been charged in New York with violating election campaign finance laws.

If true, that would bolster Democrats' argument that Trump associates spent nearly a year trying to oust Yovanovitch because they saw her as an obstacle in their efforts to pressure Ukraine.

Trump has said he had the right to fire Yovanovitch, which he did in May 2019.

"Every President in our history has had the right to place people who support his agenda and his policies within his Administration," said White House spokeswoman Stephanie Grisham.

The president is expected to be acquitted in the Senate, where a two-thirds vote is required to convict and remove a president from office. No Republican senator has voiced any support for his ouster.

Senator Rick Scott told reporters on Friday the House managers prosecuting the case had "done a poor job," while his Republican colleague Senator Mike Braun said Democrats were trying to build a circumstantial case that was a "tough sell."

Trump and other Republicans also accused the Democrats of wasting time with repetitive and partisan arguments.

"The Do Nothing Democrats just keep repeating and repeating, over and over again, the same old 'stuff' on the Impeachment Hoax. They want to use up ALL of their time, even though it is the wrong thing to do. They ought to go back to work for our great American people!" the president tweeted.

Once Democrats conclude their opening arguments, Trump's legal team will have up to 24 hours over three days to mount a defense. Senate Majority Leader Mitch McConnell said Saturday's session would begin at 10 a.m. ET (1500 GMT) and run for several hours.

Democrats have focused their attention on a small group of Republican moderates they believe might support their efforts to bolster their case against Trump with the inclusion of new witness testimony and additional evidence.

"This is a heavy moment. And you don't know how this sense of constitutional and historical responsibility weighs on the shoulders," Senator Chuck Schumer, the top Democrat in the chamber, said before the resumption of the trial.

Democrats sought to have Bolton testify in the trial, but senators voted along party lines on Tuesday against calling all of the Democrats' proposed witnesses.