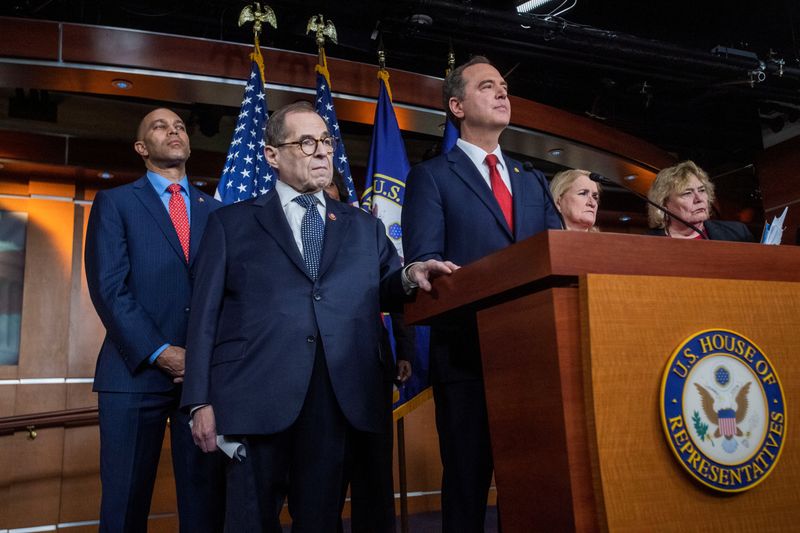 By Patricia Zengerle and Susan Cornwell

WASHINGTON (Reuters) - President Donald Trump's impeachment trial resumed on Thursday for a second day of questioning by U.S. senators before they address the explosive issue of whether to call witnesses such as former national security adviser John Bolton.

Without witnesses, Republicans, who control the Senate, say the trial could end as early as Friday with Trump's acquittal, which would leave him in office and allow him to claim vindication just as the Democratic Party holds its first nominating contest for the Nov. 3 election in Iowa on Monday.

Trump will hold a rally in the state on Thursday night.

Democrats accuse the Republican president of abusing his power by using congressionally approved military aid as leverage to get a foreign power to smear former Vice President Joe Biden, a leading contender for the Democratic nomination.

The Democratic-led House of Representatives approved the two articles of impeachment in December. Lawyers for Trump and the House Democrats who are managing the prosecution in the Senate trial will spend Thursday answering questions from lawmakers, read aloud by U.S. Chief Justice John Roberts.

On Friday, each side was expected to present what amount to closing arguments before the Senate moves to the central question of whether to call witnesses, which Democrats believe is essential to shed more light on Trump's attempt to persuade Ukraine President Volodmyr Zelenskiy to investigate Biden.

Democrats are unlikely to muster the two-thirds majority needed to remove Trump from office no matter what happens, but allowing witnesses could inflict political damage on the president as he seeks re-election.

Republican Senator Josh Hawley said he sensed the Republicans had enough votes to defeat a motion to call witnesses and that the rules for the trial called for a "pretty quick transition" to a vote on acquittal afterward.

"The general sense in the conference is that it is more likely than not," he told reporters as he headed into the Senate chamber for the resumption of the proceedings.

Senate Democratic leader Chuck Schumer said he was still optimistic that witnesses could be called, however.

"I believe Senate Republicans and the president’s team are worried about the vote," Schumer told a news conference on Thursday morning, before the proceedings restarted.

He also indicated Democrats had a strategy to ensure the trial did not end on Friday, but would not provide details.

Democrats need to persuade at least four Republican senators to vote with them to assure a majority vote in the 100-seat chamber, an effort Schumer has called an uphill fight.

At least four Republicans - Lisa Murkowski of Alaska, Mitt Romney of Utah, Susan Collins of Maine and Lamar Alexander of Tennessee - are seen as potentially on the fence on the issue.

Possible testimony from Bolton is of particular interest after a report - which he has not denied - that he planned to say in an upcoming book that Trump told him he wanted to freeze $391 million in U.S. military aid for Ukraine until it investigated Biden and his son, Hunter Biden.

House impeachment manager Jerrold Nadler, the head of the House Judiciary Committee, said it might be a good idea for the House to subpoena Bolton, media reported.

"If tomorrow’s vote fails, they will not permit him or anyone else to testify, I expect he’ll talk publicly and we will see," Nadler told reporters, according to those present.

Democrats excoriated an expansive defense of presidential power offered by Trump lawyer Alan Dershowitz during Wednesday's question-and-answer session. Dershowitz had said: "If a president does something which he believes will help him get elected in the public interest, that cannot be the kind of quid pro quo that results in an impeachment."

Representative Adam Schiff, the lead House prosecutor, told reporters as he headed to the Senate floor on Thursday: "Yesterday the president's defenders argued that the president of the United States could do whatever he wanted to secure his re-election - no matter how corrupt - if he believed his re-election was in the national interest. ... That is the most absurdly dangerous argument that could have been made."

Dershowitz tweeted on Thursday that the media "distorted" his remarks.

If the vote on whether to allow witnesses is 50-50, Chief Justice Roberts could step in to break the tie. But there is so little precedent for impeachment trials - this is only the third of a president in U.S. history - that Senate aides said there is no way to know exactly what would occur.