Home World News Brexit is finally happening. On January 31. For real this time.

Brexit is finally happening. On January 31. For real this time. 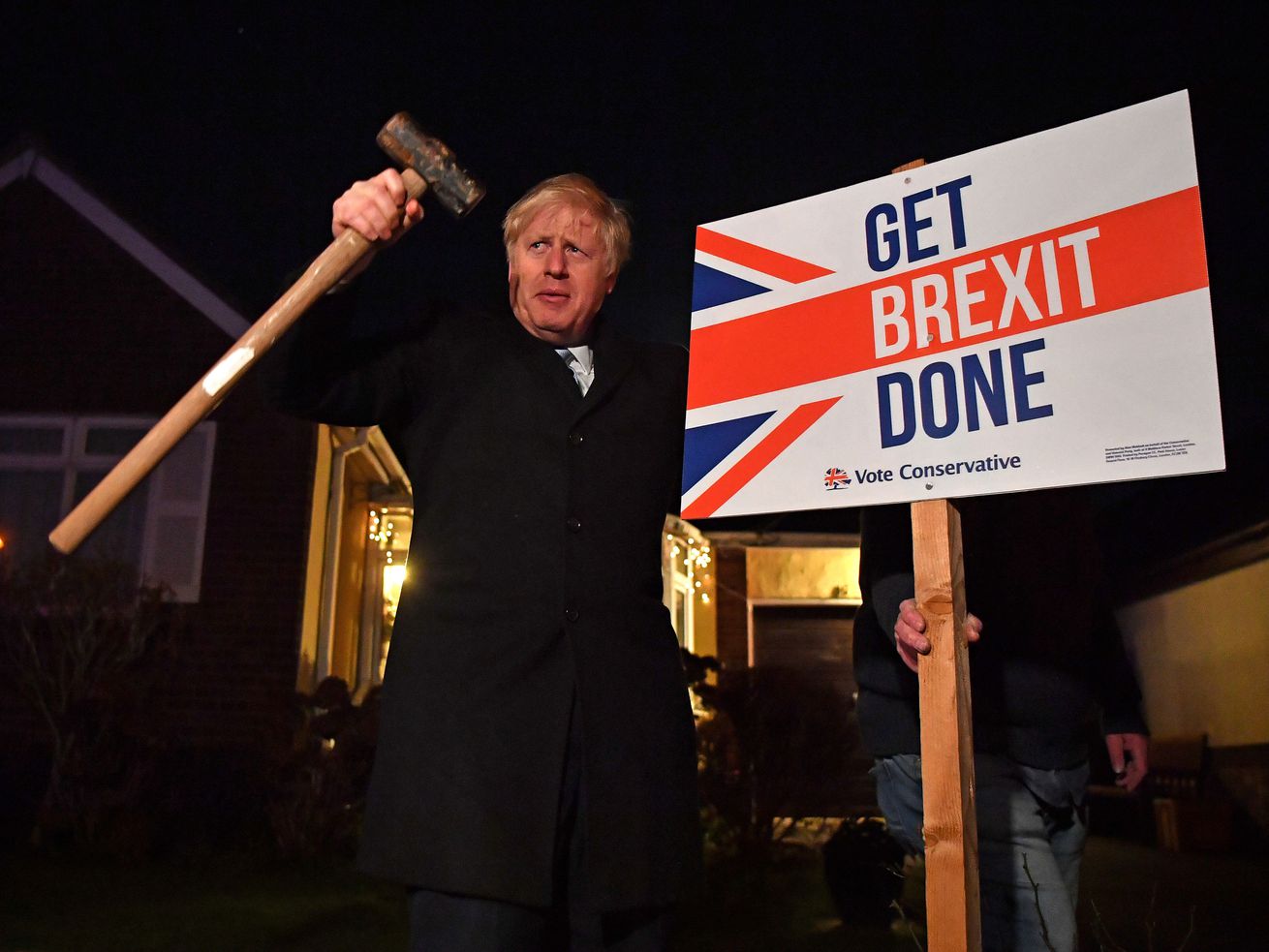 British Prime Minister and Conservative Party leader Boris Johnson poses after hammering a “Get Brexit Done” sign into the garden of a supporter as he campaigns for a general election in Benfleet, east of London, on December 11, 2019. | Ben Stansall/Pool/AFP via Getty Images

The European Parliament must still give its approval next week, but it won’t be a hurdle to the UK’s end-of-month exit.

Brexit is finally, officially happening — for real this time.

The United Kingdom has passed the legislation to make the current Brexit deal with the European Union official UK law, paving the way for the country’s exit from the EU on January 31.

With Parliament agreed, the legislation received royal assent on Thursday, allowing the Queen to give formal approval to a British exit (after approving one of a different sort this month).

Prime Minister Boris Johnson’s election victory in December, which delivered him an 80-seat majority in the House of Commons, turned the historic Brexit moment into something more humdrum, as the opposition lawmakers could make little resistance to the government’s plans. Even in the House of Lords, where Johnson doesn’t have a lot of support, peers were restrained from staging too much of a challenge, as it would be seen as stymieing the will of the electorate.

But the moment is still monumental, as the UK prepares to end its EU membership and chart a new version of its relationship with the bloc. The European Parliament has to approve the Brexit deal on January 29, but this is largely a formality.

Which means the UK and the EU will end their 40-year marriage by the end of this month.

What to expect after January 31

The EU-UK relationship won’t seem that different, at least at first. The UK and the EU are about to enter an 11-month transition period, during which the UK will continue to follow most EU rules but will not have any decision-making power in the body.

During this period, the UK and the EU will figure out what the future will look like: how they’ll trade with each other, how they’ll regulate financial services, how they’ll work together on security — and quite a bit more.

The starting point for these negotiations will be something called the political declaration, which sets out broad principles (“establishes the parameters of an ambitious, broad, deep and flexible partnership across trade and economic cooperation with a comprehensive and balanced Free Trade Agreement at its core” — you get the idea ) but lacks details on how, exactly, these goals will be achieved.

Negotiations will begin in earnest in late February or early March, and the window to complete them — again, less than 11 months — is narrow and ambitious. Many EU officials have been pretty blunt and said that they do not believe this is enough time to settle all the details of this future EU-UK cooperation. After all, it took about three years just to get to this point. This next phase is likely to be even tougher.

But this is the way Johnson wants it.

The Brexit deal allows the possibility of an extension to this period until the end of 2022. Johnson, however, campaigned on the promise that he would not extend the transition period, and he eliminated that possibility from the Brexit legislation that just became law. Laws can be amended, but as of now, the UK and EU must begin landmark talks on a supercharged schedule.

Hardcore Brexiteers believe the tight time window will focus minds — in the UK, but just as importantly, in Brussels, where some see the EU eager to drag this out or keep trying to entrap the UK for fear of its leaving. In reality, the EU is plenty weary of Brexit; this is something the UK did to the EU, not the other way around.

But leaders in the EU are likely to be firm on one key issue: making sure that if the UK wants to retain access to the EU’s market, it cannot diverge too much from the EU’s regulations.

If “Irish backstop” was the defining phrase of the first part of Brexit negotiations, get ready for “level playing field” to be the defining phrase of the second part. The EU wants to guarantee a “level playing field” with the UK in any free-trade agreement, basically to prevent the UK from so drastically changing their economic regulations (such as giving huge tax breaks or subsidies to companies) or environmental or labor standards that it could undercut the EU.

Some Brexiteers once declared that after Brexit, the UK would become “Singapore on Thames” — a shorthand for a low-tax, low-regulation economy. That’s exactly what the EU wants to avoid.

Of course, a “level playing field” is not a new, Brexit-specific thing. This is usually part of any free-trade agreement negotiation. The US frequently insists on a level playing field in its deals because it wants to avoid undercutting US workers or businesses. (This is, at least partly, the Trump administration’s motivation for renegotiating NAFTA.)

If it turns out the UK doesn’t want to differ very much from EU rules, this could all go rather smoothly. That could also potentially give the UK less freedom to make its own regulations than it may have originally envisioned when it left the EU.

But remember all those onerous regulations the pro-Leave crowd promised would disappear once Brexit happened? So far, Johnson’s government looks as if it does want to diverge from EU rules. If Johnson follows through on that promise, things could get messy — and the tradeoff could be the degree of access the UK has to EU market. Currently, the EU is the UK’s largest trading partner: 45 percent of all UK exports go to the EU. And more than 50 percent of the UK’s imports are from the EU.

Though Johnson has promised ambitious trade deals with the rest of the world — including the United States — reorienting trade takes time, as does negotiating complex agreements. As of right now, if the UK and EU don’t reach some agreement by the end of 2020, it could threaten serious serious economic disruption on the continent.

Either way, though, the UK is breaking up with the EU on January 31, even if Big Ben doesn’t chime to mark the occasion.

And then the UK, the EU, and the rest of the world will start discovering what “Brexit” actually means.