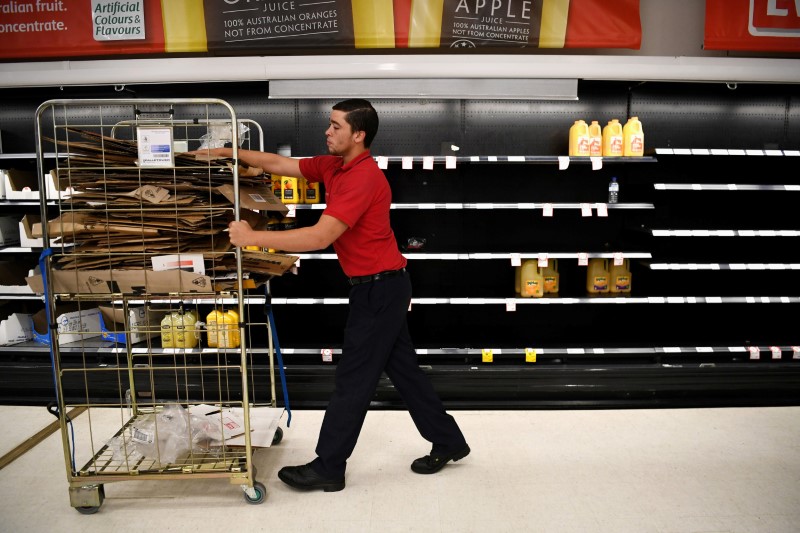 SYDNEY (Reuters) - Australian consumer pessimism deepened in January as households fretted about the economic impact of devastating bushfires that killed 29 people, millions of animals and destroyed thousands of homes in recent months.

The Melbourne Institute and Westpac Bank (AX:WBC) index of consumer sentiment, released on Wednesday, fell 1.8% in January to the lowest since last October. It declined 1.9% in December.

The index was down a hefty 6.2% from a year earlier, and at 93.4 indicated pessimists continued to outnumber optimists.

The free-fall in sentiment bodes poorly for consumer spending and could hit growth in Australia's A$1.9 trillion ($1.30 trillion) economy in coming quarters.

Economists generally expect the bushfires to drag on gross domestic product by 0.25%-0.4% per quarter through March 2020, with agriculture, retail, tourism and construction the hardest hit.

Westpac chief economist Bill Evans said the index could have fallen further but the survey was conducted in the week where there was widespread rain, which somewhat cushioned the hit from the bushfires.

Wildfires are common in Australia but the current season was unprecedented in its scale of destruction and duration. Scores of fires continue to burn on the east coast despite recent rain.

"If the survey had been conducted a few weeks earlier then the index is likely to have fallen by even more, notwithstanding the very low starting point," Evans said in a statement.

"This low level of confidence is consistent with the generally lackluster reports on consumer spending."

All the economic components of the index recorded declines in January.

The direct impact of the fires has so far been felt mainly in rural townships though hazardous smoke haze hung over the biggest cities of Sydney and Melbourne, hitting tourism and spending.

Businesses are also feeling the heat with fashion retailers and food & beverage makers reporting a slowdown in sales.

The Australian Tourism Export Council has estimated international tourism revenue in 2020 could fall by 10% to 20%.

"Overall, we think that the bushfires increase the likelihood of a rate cut from the RBA in February," UBS analysts wrote in a note on Tuesday.

The Reserve Bank of Australia (RBA) slashed interest rates three times last year to an all-time low of 0.75% and has expressed intentions to do more if needed.