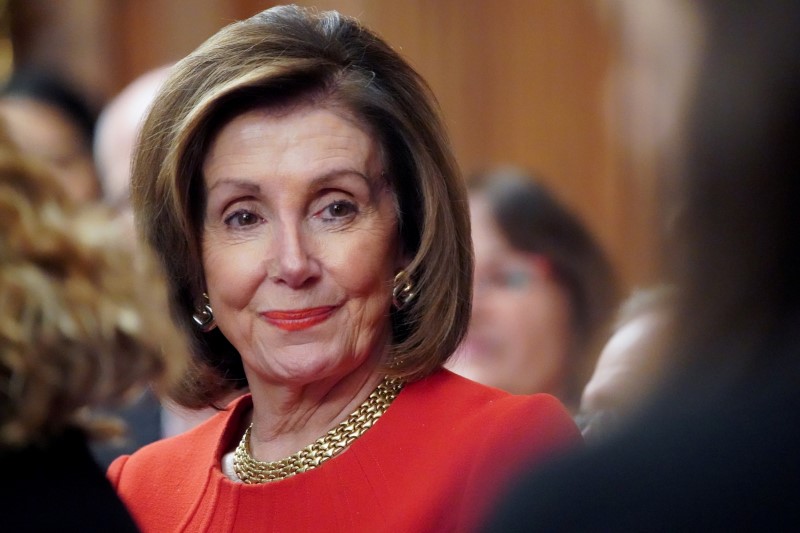 © Reuters. FILE PHOTO: Speaker of the House Pelosi speaks during a news conference at the Capitol in Washington

(Reuters) - As the curtain rises on President Donald Trump's impeachment trial, a one-woman show about Nancy Pelosi, the first female Speaker of the House and a principal in the historic drama unfolding in Washington, is opening this week in Chicago.

"The Adult in the Room," which started to take shape about a year ago, was "fast-tracked" to keep pace with the events leading to the president's impeachment by the Democratic-controlled House of Representatives, playwright Bill McMahon told WBBM radio.

"The entire time I've been working on this piece, it's like I've been trying to catch up with history," McMahon said. "The ending has changed several times."

McMahon's play primarily tells the story of Pelosi, a Democrat who is now serving her 17th term representing a California congressional district. By virtue of her selection by colleagues as the House Speaker, which occurred for a second time in 2019, she is the highest female officeholder in U.S. history.

But hers is a story that could not be told without a close examination of the political tensions gripping the nation.

Trump, a Republican, is only the third U.S. president in history to be impeached by the House. With Pelosi sending two articles of impeachment against him to the Senate last week, the upper chamber formally took up the case on Tuesday, setting in motion a trial with seismic political implications.

Pelosi, the only girl and the youngest of seven in a politically connected family, has read the script and gave the play a thumbs-up, McMahon said.

"It's a heavy time right now. Hopefully people find some inspiration in this," McMahon said.

"The Adult in the Room" is being staged at Chicago's Victory Gardens Theater and runs through Feb. 15. The production then heads for Washington, D.C., and New York.