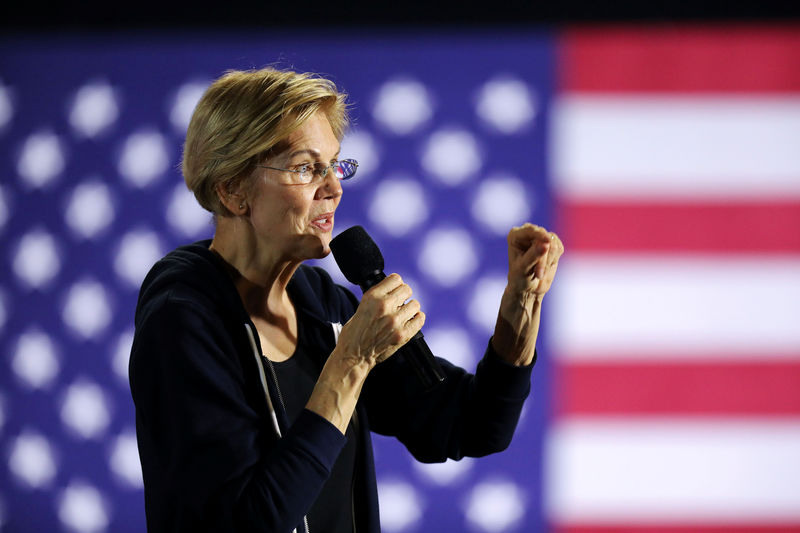 LAS VEGAS (Reuters) - Democratic presidential contender Elizabeth Warren will likely have to defend her Medicare for All healthcare proposal on Monday, when she faces members of an influential union at a labor-sponsored town hall in Las Vegas.

Warren is the first of three leading candidates seeking the Democratic Party's nomination to run against Republican President Donald Trump in 2020 to appear this week at town halls hosted by the 60,000-member Culinary Workers Local 226.

Her participation on Monday night, to be followed by Vermont Senator Bernie Sanders on Tuesday and former Vice President Joe Biden on Wednesday, shows the significance of labor's support to candidates vying for the party's nomination just two months before the early-voting state of Nevada picks its choice.

Unions are so crucial to Democrats' electoral success in Nevada that early voting for the state's February nominating caucuses will take place in union halls.

All three of the candidates are allied with labor, but touchy questions remain for Warren and Sanders on their healthcare proposals. Both have said their plans would lead to the elimination of private healthcare, although Warren just days before her last trip to Nevada made a point of saying healthcare clinics funded under union contracts would be allowed to continue to operate under her plan.

Like many unions, the Culinary Workers have not yet endorsed a candidate among the 15 still vying for the party's nomination.

Its leaders have made clear to Sanders and Warren that preserving union healthcare is key to their members, said a source familiar with union leaders' thinking, who requested anonymity in order to speak frankly.

"One of the reasons they're in a union is that it provides them with healthcare," said Donna West, Democratic Party chairwoman in Clark County, where Las Vegas is located. "They are listening intently to these candidates and asking them about their plans for healthcare and how it would impact their members."

Biden, who is leading in polls in Nevada and nationally, has promised to preserve union healthcare and is not considering eliminating private plans in his proposal to expand the Affordable Care Act passed under former President Barack Obama.

But Biden, who served as Obama's vice president, may face tough questions on immigration stemming from that administration's high deportation numbers.

Culinary Workers, the state's largest union, is heavily comprised of immigrants who work in casinos, hotels and bars.