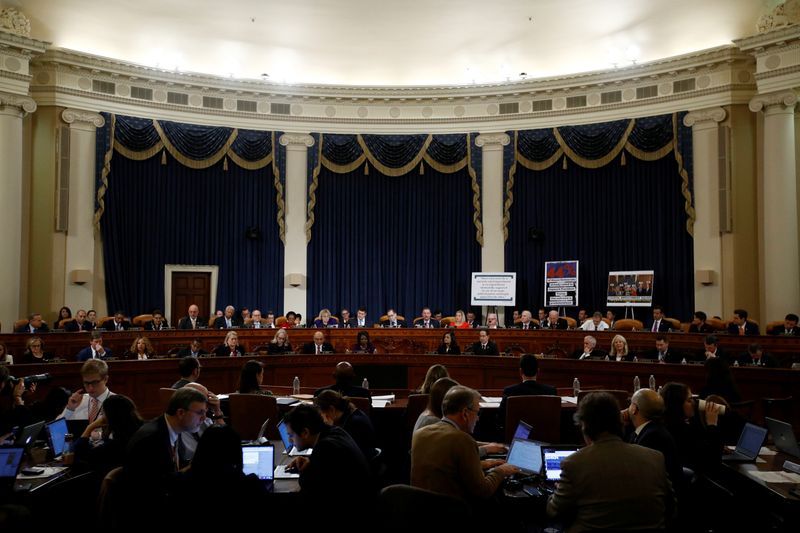 By David Morgan and Richard Cowan

WASHINGTON (Reuters) - Democrats in the U.S. House of Representatives moved closer on Wednesday to impeaching President Donald Trump as a key House committee began debating formal articles of impeachment that are expected to be brought to the House floor next week.

The House Judiciary Committee was meeting to consider the two articles, which accuse Trump of abusing his power by trying to force Ukraine to investigate political rival Joe Biden and of obstructing Congress when lawmakers tried to look into the matter.

"If the president can first abuse his power and then stonewall all congressional requests for information, Congress cannot fulfill its duty to act as a check and balance against the executive (branch) — and the president becomes a dictator," Representative Jerrold Nadler, the Democratic chairman of the Judiciary panel, said in opening remarks.

But the committee's top Republican, Doug Collins, accused Democrats of being predisposed toward impeachment and argued that the evidence did not support it.

“You can’t make your case against the president because nothing happened,” Collins said.

Trump has denied wrongdoing and condemned the impeachment inquiry as a hoax.

Democrats spent much of the evening denouncing Trump's conduct and shaming Republicans for defending him, while Republicans railed against what they see as a partisan and unjust inquiry.

"President Trump's high crimes threaten our democracy," said Democratic Representative Hank Johnson. "I'm a black man representing Georgia, born when Jim Crow was alive and well. To me the idea that elections can be undermined is not theoretical," referring to the era of racial segregation.

Republican Jim Jordan contended the process was being driven by animus toward Trump and his allies.

"They don't like us - that's what this is about," Jordan said. "They don't like the president's supporters, and they dislike us so much they're willing to weaponize the government."

The committee is expected to approve the charges sometime on Thursday. The full Democratic-led House is likely to follow suit next week, making Trump the third president in U.S. history to be impeached.

Following the House vote, charges will go to the Senate for a trial. The Republican-led chamber is unlikely to vote to remove Trump from office.

On Wednesday, the president and senior Republicans appeared to be coalescing around the idea of a shorter proceeding in that chamber.

After initially saying he wanted a full-blown, potentially lengthy trial in the Senate, Trump seemed to be leaning toward a streamlined affair that would allow him to move quickly past the threat to his presidency, two sources familiar with the situation said on Wednesday.

Trump's new thinking could remove a potential source of friction with Senate Republicans, who appeared to balk at the idea of a long trial with witnesses.

But it was not yet clear whether Trump was ready to abandon his demand for witnesses, such as Biden, which would trigger demands from Democrats for high-profile Trump administration witnesses.

"I think as an American the best thing we can do is deep-six this thing," a staunch Trump ally, Senator Lindsey Graham, told reporters on Wednesday.

Asked why he thought Republican senators were now talking about a short trial, possibly with no witnesses, Dick Durbin, the No. 2 Democrat in the Senate, said: "I think the answer is obvious. They want to move on because obviously they think more attention paid to this is not in their best interest in re-election."

Democrats say Trump endangered the U.S. Constitution, jeopardized national security and undermined the integrity of the 2020 election by pressuring Ukrainian President Volodymyr Zelenskiy in a July 25 telephone call to investigate Biden, a former vice president and a leading contender for the Democratic nomination to face Trump in next year's election.

The articles of impeachment unveiled on Tuesday do not draw on other, more contentious aspects of Trump's tenure, such as his efforts to impede former Special Counsel Robert Mueller's Russia probe. Democratic lawmakers from more conservative districts had argued the focus should stay on Ukraine.

Many Democrats in those swing districts remain unsure how they will vote on impeachment, although with a 36-seat lead over Republicans in the House, passage is expected.

Trump will be on friendlier terrain in the Senate, where Democrats are not expected to pick up the 20 Republican votes they need at a minimum to drive the president from office.

If the House approves the charges, a trial would be the Senate's "first order of business in January," Majority Leader Mitch McConnell said on the Senate floor on Wednesday.

McConnell, a close Trump ally, says no decision has been made over how to conduct the trial. Approving the rules will require agreement by the majority of the Senate's 100 members.