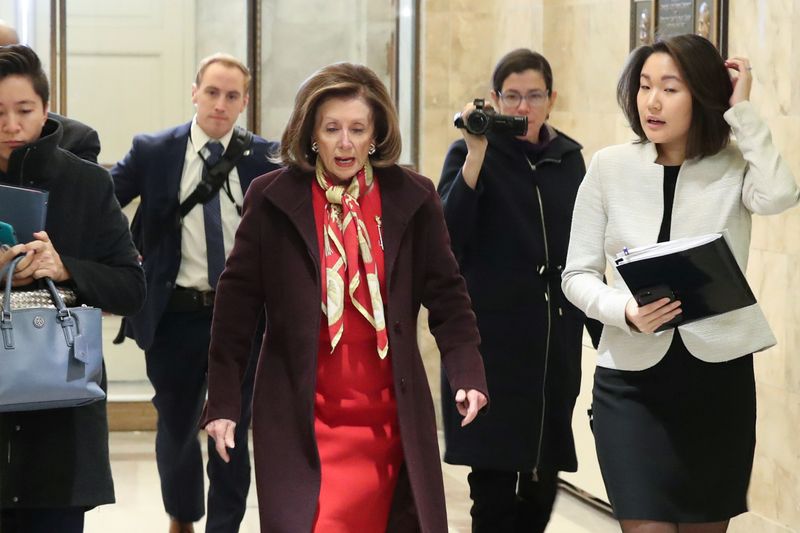 By Amanda Becker and Patricia Zengerle

WASHINGTON (Reuters) - The impeachment of President Donald Trump in the U.S. House of Representatives on charges of abuse of power and obstruction of Congress sets the stage for a historic trial next month in the Republican-controlled Senate on whether he should be removed from office.

But it was unclear on Thursday how or when that trial would play out after House Speaker Nancy Pelosi said she might delay sending over the articles of impeachment to the Senate in order to pressure that chamber to conduct what she viewed as a fair trial.

Trump said the ball was now in the Senate's court.

"Now the Do Nothing Party want to Do Nothing with the Articles & not deliver them to the Senate, but it’s Senate’s call!" Trump said on Twitter. "If the Do Nothing Democrats decide, in their great wisdom, not to show up, they would lose by Default!"

Representative Steny Hoyer, the No. 2 House Democrat, said on MSNBC that Democrats would like the Senate to first approve a $1.4 trillion spending plan and a trade agreement with Canada and Mexico before turning to impeachment.

He said Democrats were also concerned that Senate Republican leader Mitch McConnell may not allow a full trial. McConnell has predicted there is "no chance" his chamber will convict Trump.

"It's very hard to believe that Mitch McConnell can raise his right hand and pledge to be impartial," Hoyer said.

The mostly party-line votes on Wednesday in the Democratic-led House came after long hours of bitter debate that reflected the partisan tensions in a divided America, and made Trump the third U.S. president to be impeached.

Republicans argued that Democrats were using a rigged process to nullify the 2016 election and influence Trump's 2020 re-election campaign, while Democrats said Trump's actions in pressuring Ukraine to investigate Joe Biden, a leading Democratic presidential contender, were a threat to democracy.

Trump is certain to face more friendly terrain during a trial in the 100-member Senate, where a vote to remove him would require a two-thirds majority. That means at least 20 Republicans would have to join Democrats in voting against Trump - and none have indicated they will.

Pelosi said after the vote she would wait to name the House managers, who will prosecute the case, until she knew more about the Senate trial procedures. She did not specify when she would send the impeachment articles to the Senate.

Republican Senator Ted Cruz said it would not bother him if Pelosi did not send over the impeachment articles.

"My attitude is OK, throw us in that briar patch, don't send them, that's all right," he said on Fox News. "We actually have work to do."

Trump, 73, is accused of abusing his power by pressuring Ukraine to investigate Biden, a former U.S. vice president, as well as a discredited theory that Democrats conspired with Ukraine to meddle in the 2016 election.

Democrats said Trump held back $391 million in security aid intended to combat Russia-backed separatists and a coveted White House meeting for Ukrainian President Volodymyr Zelenskiy as leverage to coerce Kiev into interfering in the 2020 election by smearing Biden.

Trump is also accused of obstruction of Congress by directing administration officials and agencies not to comply with lawful House subpoenas for testimony and documents related to impeachment.

Trump, who is seeking another four-year term in the November 2020 presidential election, has denied wrongdoing and called the impeachment inquiry launched by Pelosi in September a "witch hunt."

At a raucous rally for his re-election in Battle Creek, Michigan, as the House voted, Trump said the impeachment would be a "mark of shame" for Democrats and Pelosi, and cost them in the 2020 election.

"This lawless, partisan impeachment is a political suicide march for the Democrat Party," Trump said. "They're the ones who should be impeached, every one of them."

Trump's election has polarized the United States, dividing families and friends and making it more difficult for politicians in Washington to find middle ground as they try to confront pressing challenges like the rise of China and climate change.

The impeachment vote comes ahead of Trump's re-election campaign, which will pit him against the winner among a field of Democratic contenders, including Biden, who have repeatedly criticized Trump's conduct in office and promised to make it a key issue.

Reuters/Ipsos polls show that while most Democrats wanted to see him impeached, most Republicans did not. Televised hearings last month that were meant to build public support for impeachment appear to have pushed the two sides further apart.