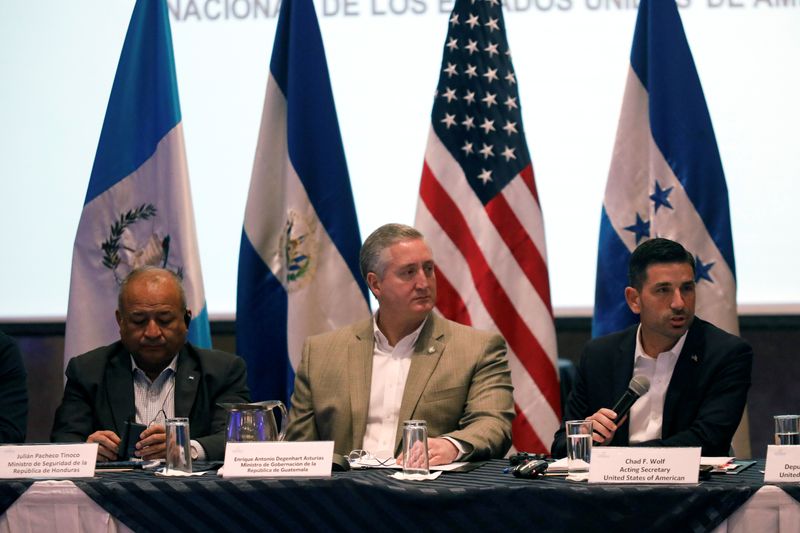 GUATEMALA CITY (Reuters) - U.S. asylum seekers sent to Guatemala under a new Trump administration program have mostly preferred to return to their country of origin instead of staying in the Central American nation, Guatemala's Interior Minister said on Thursday.

The new effort began after the administration of U.S. President Donald Trump brokered an agreement with the Guatemalan government in July. The deal will allow U.S. immigration officials to force migrants requesting asylum at the U.S.-Mexican border to apply for asylum in Guatemala first.

The program initially will be applied at a U.S. Border Patrol station in El Paso, Texas. The first phase will target adults from Honduras and El Salvador.

Interior Minister Enrique Degenhart said that a total of 24 people have been sent to Guatemala under the program.

Of those "only two have requested asylum (in Guatemala)," Degenhart said during a visit by Acting U.S. Homeland Security Secretary Chad Wolf.

While the asylum agreement with Guatemala will start slowly, the Trump administration intends to make few exceptions. Federal immigration officials have been instructed not to apply the program to unaccompanied children, migrants with valid U.S. travel documents, or cases of public interest, according to U.S. Citizenship and Immigration Services officials and documents.

"For those in the region who may be weighing the option of taking the dangerous journey north, I'd strongly urge you against it," said Wolf, in prepared remarks. "Simply requesting asylum at the Southwest border no longer guarantees release into the interior like it once did. We have ended catch and release," Wolf added.