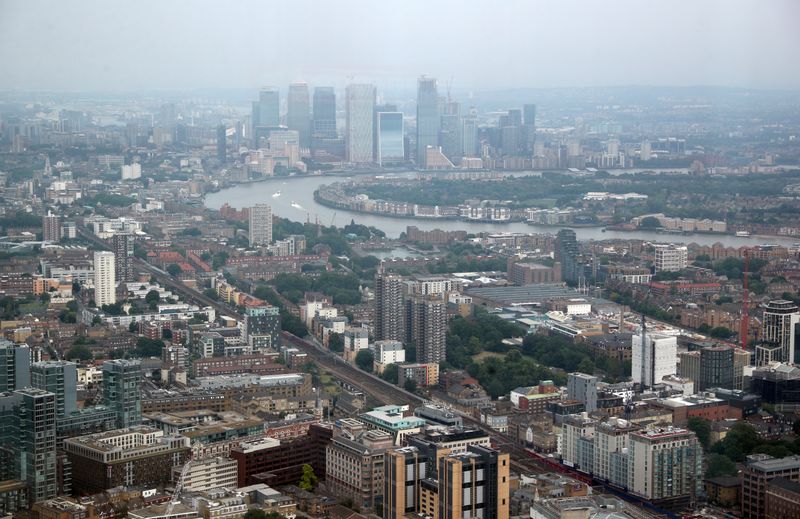 © Reuters. The Canary Wharf financial district is seen from the construction site of 22 Bishopsgate in London 2/2

By William Schomberg and Andy Bruce

LONDON (Reuters) - Britain's economy grew at its slowest annual pace in nearly seven years in October, a weak backdrop to Thursday's national election, in which both leading parties are promising to boost growth.

The approach of a Brexit deadline and the global economic slowdown hit Britain's factories and construction industry during the month, official data showed on Tuesday.

Gross domestic product rose by 0.7% compared with October 2018, the weakest growth since March 2012, when Britain was still trying to shake off the effects of the global financial crisis.

In the three months to October, growth flat-lined compared with the previous three-month period, the Office for National Statistics said, as expected by economists in a Reuters poll.

The economy also showed no change in monthly terms, the ONS said, weaker than a median forecast of 0.1% growth in the poll.

"The stagnation in GDP in October is unlikely to influence many people's vote in Thursday's election, but it could prompt some more (Bank of England officials) to consider voting for lower interest rates in the coming months," said Paul Dales, chief UK economist at consultancy Capital Economics.

Britain's economy avoided falling into a pre-Brexit recession over the summer. But it has slowed as an Oct. 31 deadline for leaving the European Union - now extended to Jan. 31 - approached, and uncertainty about the election outcome has probably made business more cautious.

Prime Minister Boris Johnson has urged voters to back him because his Brexit deal would "unleash a great tide of investment" when it clears a currently deadlocked parliament.

But worries about a chaotic exit from the EU are unlikely to vanish even if Johnson wins because he has ruled out asking Brussels to extend a transition period if a deal for future trade ties has not been agreed by the end of 2020.

The opposition Labour Party has said it will hold a fresh Brexit referendum after negotiating a new Brexit deal, potentially offsetting some of the concerns among many businesses about other Labour policies, including higher corporate taxes and nationalization of some key industries.

Samuel Tombs, an economist with Pantheon Macroeconomics, said the economy was growing more slowly than the BoE expected, but the promises of looser fiscal policy by the main political parties would reduce the need for lower interest rates.

The ONS also said industrial output fell by 0.7% in the three months to October while Britain's services grew by 0.2%, the weakest increase since June. Construction output suffered the biggest monthly fall since January 2018.

The ONS said the approach of the lapsed October Brexit deadline appeared to have increased imports and exports in October, but by less than before the original Brexit deadline at the end of March.