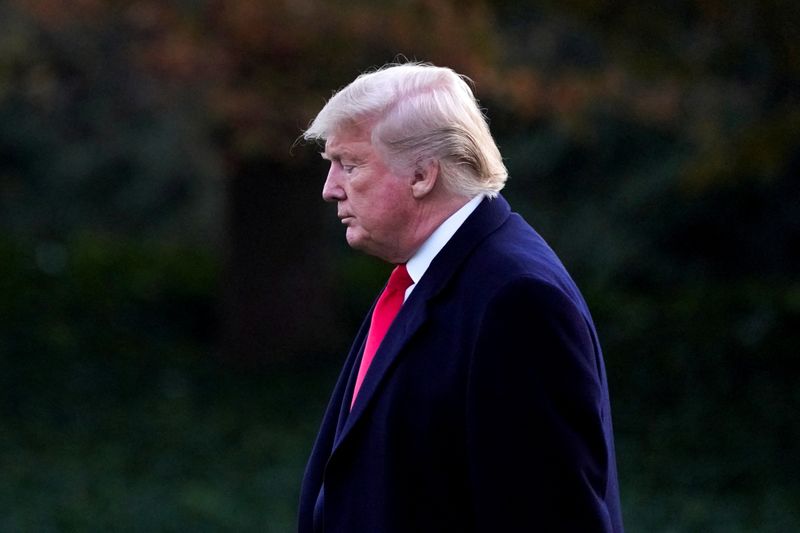 WASHINGTON (Reuters) - The U.S. Supreme Court may have a conservative majority that includes two justices appointed by President Donald Trump, but his efforts to shield his tax returns and other financial records from scrutiny still face an uncertain future.

The court could decide this week on whether to hear appeals from Trump in three cases he has lost in lower courts. While the court has a history of allowing the president to make his case, it has also deferred to Congress' right to investigate a broad range of issues. Two of the cases regard such congressional scrutiny.

Trump must win twice: First he must persuade the court to hear his appeals and then he must win on the merits. If the court decides not to hear one or all of Trump's appeals, some documents would then be handed over.

The court, which has a 5-4 conservative majority including Trump appointees Neil Gorsuch and Brett Kavanaugh, could act as soon as Friday when the justices meet to discuss privately what action to take on pending appeals.

Timing is crucial, and if the court takes up any of the cases, a ruling is likely at the end of June 2020, only months before the November election in which the Republican president is seeking a second term.

Legal experts following the cases say the Supreme Court may well agree to hear his appeals but that does not mean he will ultimately prevail.

"Whenever the president comes before the court in his personal capacity, the justices go out of their way to give him every opportunity" to make his case, said Steve Vladeck, a professor at the University of Texas at Austin School of Law.

Two cases involve fights over congressional subpoenas issued to third parties - Trump's accounting firm Mazars LLP and two banks, Deutsche Bank AG (DE:DBKGn) and Capital One Financial Corp (NYSE:COF) - and hinge on whether Democrats had the authority to issue them as part of their normal legislative activities.

Democrats, who are seeking the documents even as they pursue impeachment charges against Trump over his dealings with Ukraine, say they are probing whether ethics and corruption laws need to be updated. Trump's lawyers say there was no legislative purpose and that the aim was merely to dig for dirt on the president.

In both cases, lower courts ruled against Trump, citing in part several Supreme Court precedents that supported the House's authority to conduct broad investigations, including one dating back to 1927. In that case, the court upheld a subpoena seeking the bank records of the attorney general's brother.

Michael Stern, a former House of Representatives lawyer when it was under Republican control, said that it has been broadly understood that Congress could enforce such subpoenas.

"There's no basis for the position Trump is taking," he said.

The third case is part of a criminal investigation into Trump and the Trump Organization, the president's family real estate business, in which Manhattan District Attorney Cyrus Vance, a Democrat, is seeking Trump's tax returns.

Trump's lawyers argue the case raises broad questions on whether a president can face criminal prosecution while in office and they argue for broad immunity. Vance counters that the investigation is purely about Trump's business activities and does not touch on his official duties as president.

The appeals court ruling against Trump cited the 1997 Supreme Court case in which the justices ruled against President Bill Clinton, who was seeking to avoid civil litigation brought by Paula Jones, who accused him of making unwanted sexual advances.

The court said then that the president was "subject to judicial process in appropriate circumstances."

Although the Supreme Court has a history of taking up cases when the president so requests, it does not always rule in the White House's favor.

The Clinton v. Jones case is one example.

Another came in 1974 when the court heard President Richard Nixon's bid to avoid handing over tapes and other materials to a federal judge as part of a criminal investigation into the Watergate scandal. Like Clinton, he lost unanimously.