Home Politics Trump off to London for NATO summit, under pressure to steer clear of British election

Trump off to London for NATO summit, under pressure to steer clear of British election 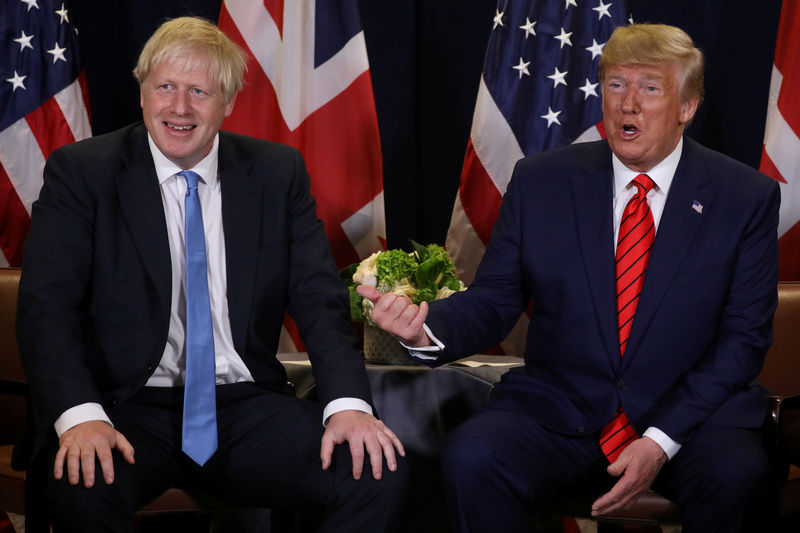 WASHINGTON (Reuters) - U.S. President Donald Trump leaves on Monday for a NATO summit in London and he is under pressure from British Prime Minister Boris Johnson to resist the temptation to wade into the British election campaign coming up later in December.

As a presidential candidate in 2016 and then as president since early 2017, Trump has shown no restraint in showing support for Britain's exit from the European Union and critiquing the politicians involved in the country's long-running Brexit debate.

But with Johnson leading polls as he faces Dec. 12 elections, the prime minister who is hosting the London NATO summit wants Trump to mind the guard-rails, putting Trump in the unusual position of trying to avoid his normal impulse to comment on whatever he wishes.

Trump waded into the election in October by saying opposition Labour Party leader Jeremy Corbyn would be “so bad” for Britain and that Johnson should agree on a pact with Brexit Party leader Nigel Farage.

Johnson's pressure prompted the White House to stress, as a senior administration official said, that Trump "is absolutely cognizant of not, again, wading into other country's elections."

That strategy could be put to the test as Trump faces reporters a number of times on the trip, including at what is expected to be a news conference on Wednesday.

The NATO summit takes place as Trump battles an effort led by Democrats who control the U.S. House of Representatives to force his removal from office through impeachment over his pressure on Ukraine to investigate Democratic rival Joe Biden.

The impeachment imbroglio has overshadowed Trump's presidency as he looks ahead to his own re-election fight next November.

Trump, who got back to the United States on Friday from a whirlwind trip to Afghanistan, arrives in London on Monday night for two days of meetings with NATO leaders gathered for the summit.

He will have separate talks with German Chancellor Angela Merkel, French President Emmanuel Macron and NATO Secretary General Jens Stoltenberg and attend a working lunch with representatives from Estonia, Greece, Latvia, Poland, Romania, Lithuania, Bulgaria, and the United Kingdom. U.S. officials see the NATO summit as a celebratory moment for Trump as his pressure on member nations has led many to increase their military spending.

He is expected to seek support from member nations to increase pressure on China for what the United States sees as Beijing's expansionist policies.

"China is actively seeking a great presence and more influence across the globe, including in NATO's area of responsibility," said a senior administration official.