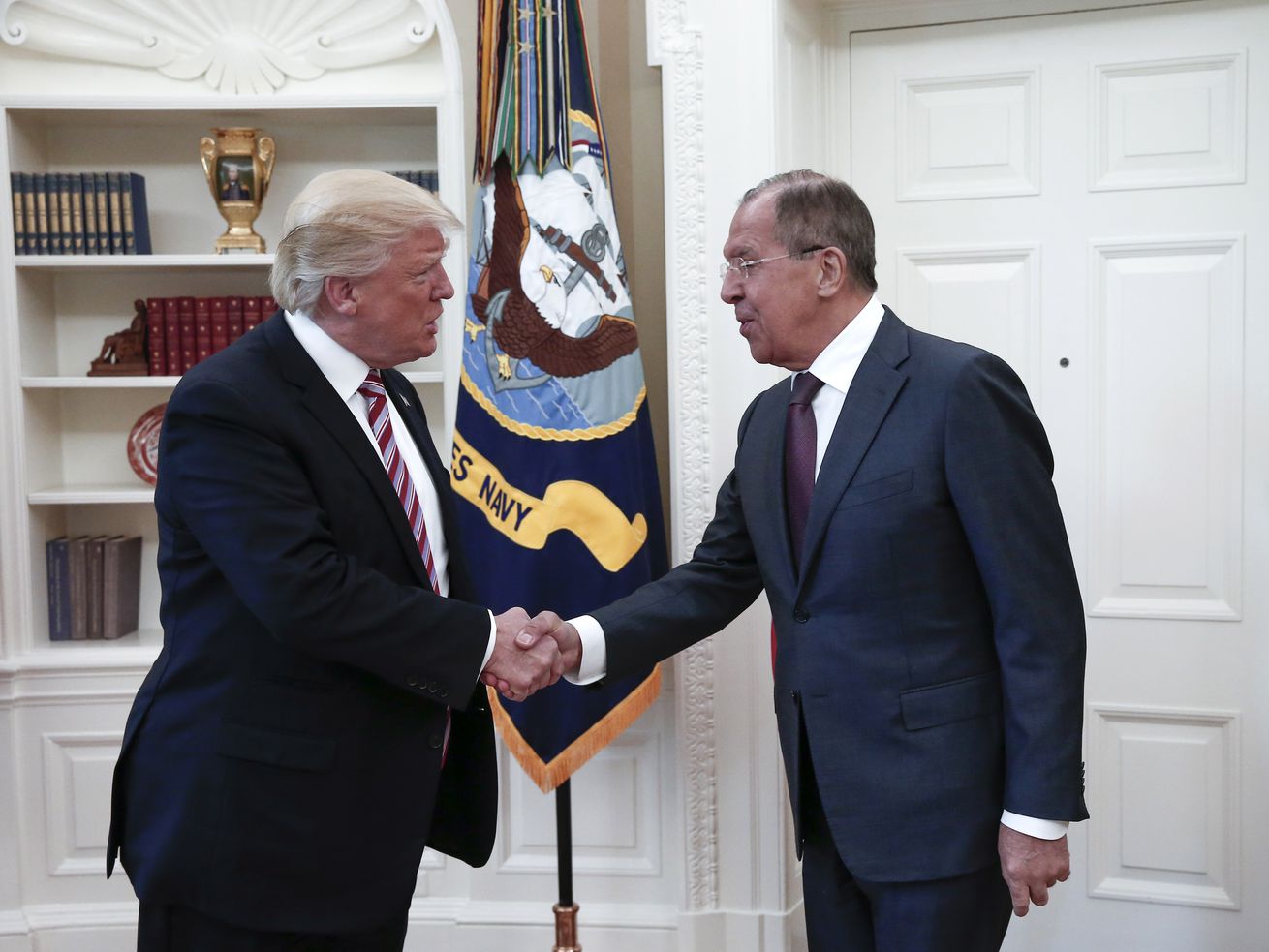 President Donald Trump shakes hands with Russia’s Foreign Minister Sergei Lavrov as they meet for talks in the Oval Office at the White House on May 10, 2017. | Alexander ShcherbakTASS via Getty Images

Trump and Lavrov still have some important matters to discuss.

But in just a few hours, Trump will bestow the honor of a White House meeting on Russia — a country that actually did interfere in a US presidential election.

Russian Foreign Minister Sergey Lavrov is in Washington for a scheduled meeting with his counterpart, Secretary of State Mike Pompeo, to discuss US-Russia relations. A White House official told me Lavrov requested a meeting with Trump, though, and now the president will meet with Lavrov in the Oval Office on Tuesday afternoon.

The optics are jarring. Trump is facing impeachment for leading a scheme to have Ukraine investigate Joe Biden’s family and Democrats in order to get military aid and a presidential White House meeting. Kyiv needed both of those things as it continues to fight off Russian forces that have invaded Ukraine’s east. The money helps with equipment and training, and the White House visit would have sent a strong sign of America’s support for its ally.

The US did release the Ukraine money on September 11 after news of the scheme became public, but Trump has yet to grant Ukrainian President Volodymyr Zelensky that coveted White House invitation. Instead, he’ll have to watch as Lavrov pals around with Trump even as Moscow continues to try to influence the next US election.

Of course, Lavrov isn’t Russia’s president, so in that sense this all could’ve looked much worse. But if you’re sitting in Kyiv right now, you’re likely wondering why Russia is getting way better treatment from America’s leader.

Ukraine is “incredibly frustrated, I’m sure,” Melinda Haring, a Ukraine expert at the Atlantic Council think tank in Washington, told me.

That on its own is a problem. But it doesn’t negate the fact that Trump has an important meeting ahead of him.

What Trump and Lavrov may discuss

The agenda for the White House meeting between Trump and Lavrov still isn’t clear, except that they will broadly discuss the state of the bilateral relationship.

Lavrov might bring up Russian President Vladimir Putin’s offer this week to extend New START, the only major arms control treaty left between Washington and Moscow, “before the year’s end and without any preconditions.”

That Obama-era deal expires in February 2021, but its provisions allow for Trump and Putin to agree to prolong it for another five years. Trump, however, has shown an inclination for ending arms control agreements — like the Iran nuclear deal and the Intermediate-range Nuclear Forces (INF) treaty with Russia — rather than keeping them on the books.

Not extending New START, though, could be potentially dangerous. Among other things, the treaty caps the number of deployed nuclear warheads either country can put on missiles or warplanes at 1,550. Without those restrictions, Washington and Moscow could get more nuclear bombs ready for use — potentially kicking off an arms race.

Which means the Trump-Lavrov conversation is hugely important. The problem is Trump is distracted with impeachment, and potentially signing a new free-trade deal with Canada and Mexico.

What’s more, the last time Trump met with Lavrov in the Oval Office, things didn’t go so well. It was two and a half years ago, right after Trump had just fired FBI Director James Comey for not stopping a probe into alleged Trump campaign collusion with Russia. In that meeting, Trump even bragged about firing Comey. The president also revealed classified details to Lavrov about a highly secretive Israeli intelligence operation involving a spy within ISIS in Syria, putting the spy in danger (Russia is allied with Iran, Israel’s nemesis, in Syria).

With more time as president under his belt, hopefully Trump will know better now not to make such an egregious error again. But the optics of the Lavrov meeting on their own are troublesome — and will surely be met with distress from Kyiv.