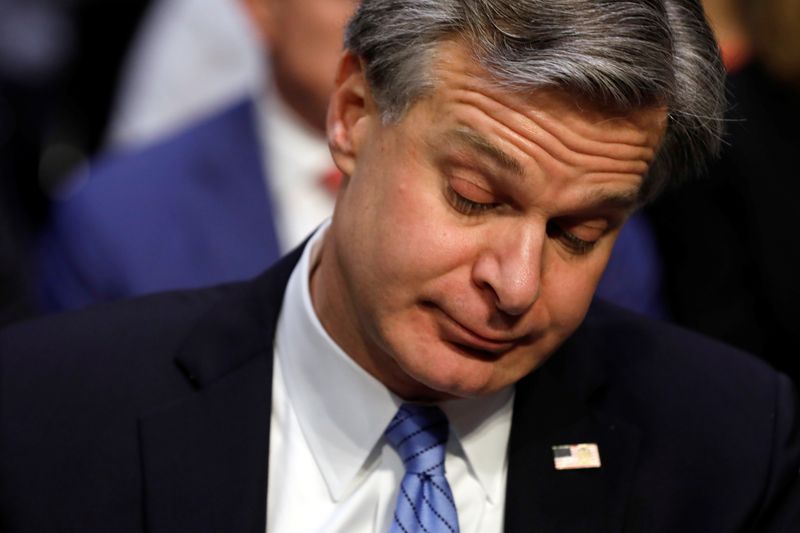 © Reuters. FBI Director Christopher Wray waits to testify before a Senate Homeland Security and Governmental Affairs Committee hearing on threats to the homeland on Capitol Hill in Washington

Trump's allies and his detractors both were encouraged by the Justice Department's internal watchdog report, which on Monday found 17 FBI missteps. The findings are unlikely to end debate over the legitimacy of the probes that have overshadowed his presidency.

Asked if he thought the FBI unfairly targeted the Trump campaign, Wray, who was appointed by Trump, told ABC News in an interview on Monday: "I do not."

Trump responded on Twitter early on Tuesday: "I don’t know what report current Director of the FBI Christopher Wray was reading, but it sure wasn’t the one given to me.

"With that kind of attitude, he will never be able to fix the FBI, which is badly broken despite having some of the greatest men & women working there!"

Representatives for the FBI and the White House did not immediately respond to requests for comment on Trump's tweet.

In Monday's interview, Wray said he took the errors seriously but noted the watchdog had found the probe "was opened with appropriate predication and authorization."

He also pushed back against the notion - advanced largely by Trump and his backers - that the Federal Bureau of Investigation is part of a "deep state" bureaucratic network aimed at undermining Trump.

"That's the kind of label that's a disservice to the men and women who work at the FBI who I think tackle their jobs with professionalism, with rigor, with objectivity, with courage," Wray told ABC, calling the term "an affront to them."

In a series of interviews on Tuesday, Barr blasted the FBI for relying on a dossier Barr called "a complete sham" penned by ex-British intelligence officer Christopher Steele to obtain a wiretap on ex-Trump campaign adviser Carter Page.

Barr also cast doubt on the report's conclusion there was no evidence of bias, telling NBC News that the FBI's errors and omissions in applying for and renewing a wiretap application raised concerns whether the FBI "acted in bad faith."

Barr told NBC he still had confidence in Wray as FBI director. "I think Chris has been working hard to address the problems of the past," Barr said.