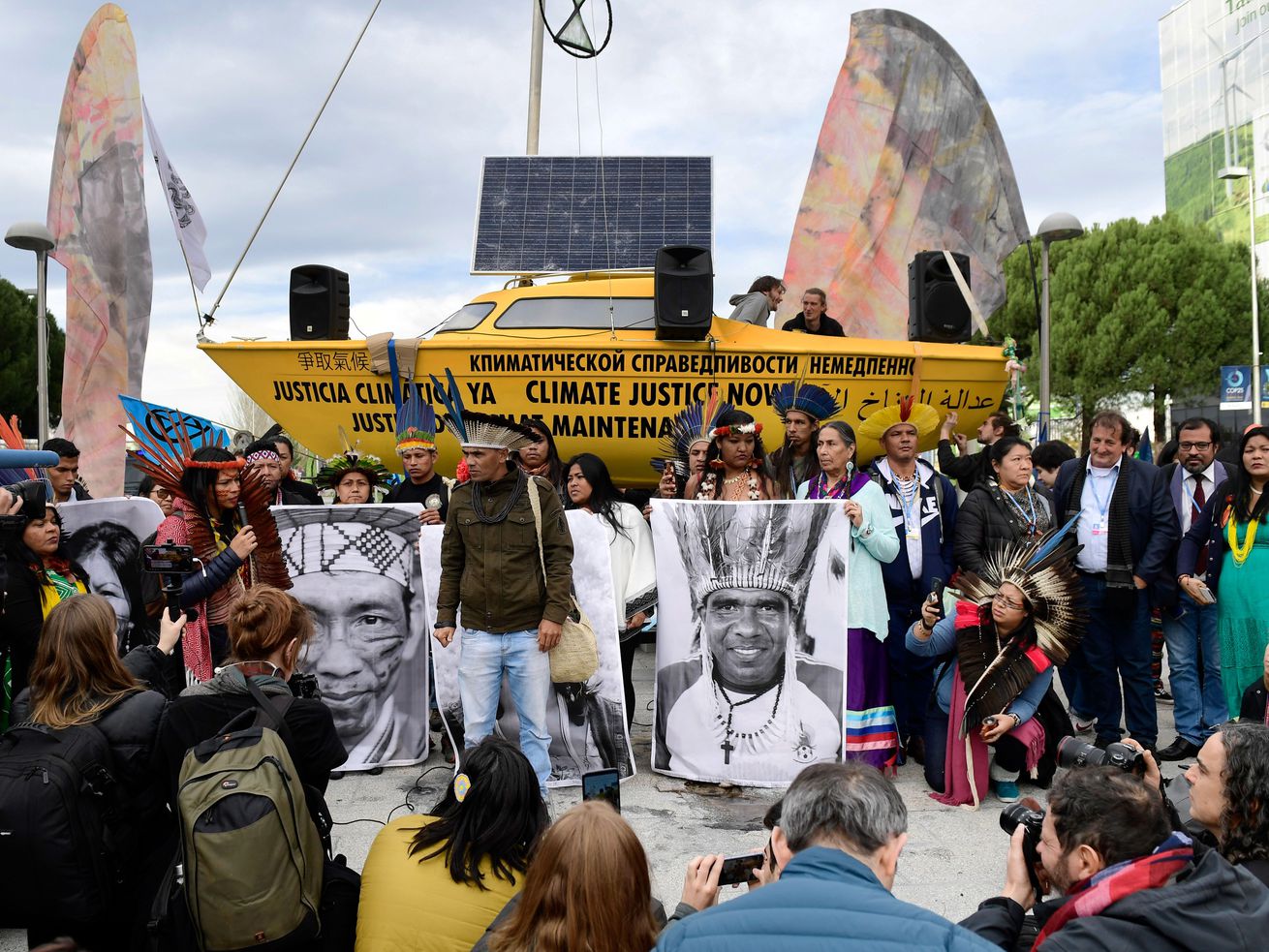 The world is skidding even further off course in limiting climate change. Now, negotiators are meeting to hammer out the arcane, complicated details of the world’s best effort to get back on track. For the 25th time. And it will shape the future of global action on climate change.

The twenty-fifth session of the Conference of the Parties, a.k.a. COP25, is an annual meeting of all the parties — almost every country in the world — concerning the United Nations Framework Convention on Climate Change. The UNFCCC hashed out the Paris agreement in 2015 and its goal is to prevent “dangerous anthropogenic interference with the climate system.”

At COP25, negotiators are aiming to cement the rules by which countries will individually and collectively curb greenhouse gas emissions. This year, the meeting is in Madrid, Spain, and it comes at a time when global greenhouse gas emissions are at a record high and climate change activists are angrier than ever about the lack of action.

Many world leaders, however, are distracted. The COP25 venue was moved from Santiago, Chile, to Madrid after protests rocked the Chilean city in October, sending diplomats and activists scrambling. The meeting was moved to Santiago after the original host, Brazil, backed out when a new right-wing government took power last year.

Meanwhile, France is facing a general strike; the United Kingdom is having a general election this week; Bolivia, home to 7 percent of the Amazon rainforest, a major reservoir of carbon, saw its previous government ousted in a military coup. The Brazilian Amazon, which accounts for 60 percent of the Amazon rainforest’s area, saw its highest rate of deforestation in a decade this year. Widespread protests are also underway in Lebanon and Iraq.

China, the world’s largest emitter, is dealing with ongoing protests in Hong Kong. And the United States, the second-largest greenhouse gas emitter in the world, is backing out of the Paris agreement altogether.

For all its flaws — that it isn’t binding, that countries set their own goals, that there’s no enforcement — the Paris agreement remains the best international framework to fight climate change. And yet its goals of limiting warming this century to less than 2 degrees Celsius, with a more ambitious target of limiting warming to below 1.5 degrees Celsius, are slipping further out of reach. Scientists warned last year that the world may have as little as 10 years to stay on course to stay within the 1.5 degrees Celsius goalposts. And some of the critical details of the Paris accord remain unresolved.

“Today, the world is set to produce 120 percent more fossil fuels than is consistent with a 1.5-degree pathway,” said UN Secretary General Antonio Guterres at the start of the meeting last week. “But the scientific community is also telling us that the roadmap to stay below 1.5 degrees is still within reach.”

That’s made COP25 a high-stakes negotiation to place the world on track to avoid the most devastating consequences of climate change. But thorny disputes about the rules of the Paris agreement that derailed previous meetings will have to be resolved in Madrid or else the accord risks falling apart.

Both inside and outside of the conference hall, climate change campaigners are calling for even more ambitious commitments to avert dangerous climate change. Swedish teen activist Greta Thunberg, fresh from her three-week boat journey back across the Atlantic, led hundreds of thousands of people at a school strike in Madrid on Friday. Protesters from Extinction Rebellion blocked streets in Madrid on Saturday and stalled traffic in front of the COP25 building on Monday.

COP25 is now in its second and final week, and time is running out for negotiators to produce something meaningful at the end. Here are some of the key issues negotiators are facing this week.

There is still unfinished business in implementing the Paris climate agreement

In the 2015 Paris accord, almost every country in the world agreed for the first time that the climate is changing due to human activity, and that they are obligated to act to mitigate it. But what form that action takes is different for each country, and each country gets to define that action for themselves.

Still, the agreement sets out parameters for how countries set their targets, how they measure progress, how they ramp up their goals over time, and how they report their efforts in a transparent way. Together, these standards form what’s called the Paris rulebook, and it’s the means by which countries will actually put the accord into practice.

Much of the Paris rulebook was finalized at the last UN climate meeting in Poland, but there are still several issues on the table at COP25. One is that many developing countries want stronger provisions around loss and damage stemming from climate change. The idea is that in addition to reducing the future impacts of climate change, there needs to be accountability for past and present damages. Rising sea levels, more extreme heat, and worsening disasters are already taking a toll on some of the poorest regions in the world. Many changes to the climate are also baked in and unavoidable. So wealthier countries should allocate funds for dealing with these consequences in poorer countries, rather than simply funding projects that curb emissions and deploy clean energy.

The main framework for this is the Warsaw International Mechanism, but it doesn’t come with a built-in source of funding. And some wealthier countries are already trying to limit their potential contributions to the mechanism.

There are also negotiations around setting common timeframes for implementing the Paris agreement, namely determining the time horizon for commitments to curb emissions.

However, the section of the Paris agreement known as Article 6 has proven to be especially difficult to resolve. It takes up just over one page of the Paris agreement text, but has enormous, complicated implications for the accord and could collapse it altogether. The negotiations around Article 6 pushed the last round of climate talks at COP24 in Poland into overtime and it still wasn’t resolved. So getting it right is a high priority for negotiators in Spain.

“I strongly hope that COP25 will be able to agree on the guidelines for the implementation of Article 6 of the Paris Agreement,” Guterres said. “That was unfortunately not achieved in Katowice [Poland].”

Article 6 governs how countries can work across borders to meet their climate change targets, particularly through markets where countries can trade carbon emissions credits. If one country is well ahead of their target for curbing emissions, they could sell the credit for the overshoot to another country struggling to hit their own target, for example.

Ideally, such mechanisms would allow countries to adopt even more ambitious greenhouse gas reduction targets than they would otherwise. It would also help conserve some of the most valuable bulwarks against climate change, like tropical rainforests that soak up and store vast quantities of carbon.

But a badly structured set of rules around Article 6 could undermine progress in limiting climate change, allowing wealthy countries to buy their way into meeting their goals with offsets, or if credits are poorly designed, lead to more greenhouse gas emissions overall.

Simon Evans and Josh Gabbatiss at Carbon Brief have an excellent in-depth explainer for all the ways Article 6 could make or break the Paris agreement. The double-counting problem though, may be the biggest issue.

Known as “corresponding adjustments” in UN-speak, the idea is that if an emissions credit is sold from one country to another, it moves from the ledger of one country to another. For example, if Norway pays to restore a chunk of the Amazon rainforest, which in turn absorbs a quantity of carbon dioxide, Norway would get credit for reducing its net impact on the climate, but not Brazil. But if both countries claim credit, that’s double-counting.

Reports indicated that Brazil has been one of the most vocal opponents of this idea of corresponding adjustments, likely because Brazil is home to 60 percent of the Amazon rainforest. The Amazon stores about 10 years’ worth of human-produced emissions in its biomass, but there’s tremendous economic pressure to exploit it. Protecting and restoring the Amazon could be a vast source of emissions credits.

Brazil’s negotiators have cited section 4(c) of Article 6, which states that an international emissions trading mechanism should “contribute to the reduction of emission levels in the host Party, which will benefit from mitigation activities resulting in emission reductions that can also be used by another Party to fulfill its nationally determined contribution.” That is, the country that hosts an emissions reduction project deserves to benefit from it somehow.

Thiago de Araujo Mendes, the secretary for climate change and forests in Brazil’s environment ministry, wrote in letter to the Guardian last year that Brazil is opposed to double-counting. But Brazil’s proposal at the last round of talks effectively allowed double-counting in the early years of the Paris agreement with the stipulation that the over-estimate would be corrected and compensated for at a later date.

It’s not too surprising, then, that some activists are skeptical of the whole enterprise. “Instead of focusing on how to transition from fossil fuels, COP25 is focused on finding elaborate ways for rich, industrialized countries to be able to carry on polluting while pretending not to,” said Angela Valenzuela, a youth climate activist from Chile, during a press conference Monday in Madrid.

The COP in Glasgow in November 2020 will mark five years since the signing of the Paris agreement, and it’s the meeting when countries are expected to present their next round of commitments to curb their contributions to climate change. That means even more aggressive cuts to greenhouse gas emissions, less reliance on mechanisms like emissions trading, and more details about how they will achieve their goals.

Sixty-eight countries have already indicated that they plan to ramp up their goals, but these countries are mainly smaller developing countries on the front lines of climate change, like island countries facing sea level rise.

Many of the larger greenhouse gas emitters have so far been silent. “The major economies are not showing the leadership they need to show,” Andrew Steer, president of the World Resources Institute told reporters Monday. “We are not anywhere close to where we need to be.”

The unofficial goal of COP25 was to be a venue where more countries would announce more aggressive goals, as well as more funding for international climate financing programs. Steer said that it’s likely more countries will take this opportunity before the conference is over. But the rules that are decided here will determine how much more aggressively the world acts to limit warming in the coming decade.