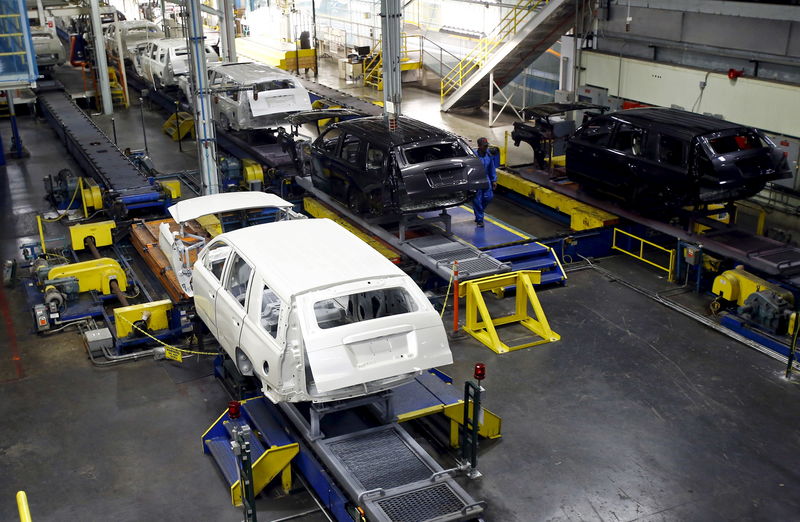 WASHINGTON (Reuters) - U.S. job growth increased by the most in 10 months in November as the healthcare industry boosted hiring and production workers at General Motors (N:GM) returned to work after a strike, the strongest sign yet the economy is in no danger of stalling.

The unemployment rate ticked back down to its lowest level in nearly half a century and wage gains remained near their strongest in a decade, the Labor Department's closely watched monthly employment report showed on Friday.

The numbers suggest consumers will keep the longest economic expansion in history, now in its 11th year, chugging along into next year when Americans will decide whether to re-elect President Donald Trump.

The report added to other fairly upbeat data on the trade deficit, housing and orders for big-ticket goods. Together, the improving data appear to validate the Federal Reserve's decision in October to signal no further interest rate cuts are needed for now. The U.S. central bank cut rates three times this year, starting in July when it reduced borrowing costs for the first time since 2008.

U.S. central bank policymakers are expected to highlight the economy's resilience when they meet on Dec. 10-11, though trade tensions continue to reverberate in the background.

"This was a strong report, with a solid rise in payrolls, another drop in the unemployment rate, and decent growth in hourly earnings," said Chris Low, chief economist at FHN Financial in New York. "The Fed will see this as clear vindication of their decision to stop cutting rates."

Nonfarm payrolls increased by 266,000 jobs last month, lifted by the gain of 60,200 healthcare workers, the most since March, and increased hiring at restaurants and bars, the government's survey of establishments showed. Manufacturing recouped all the 43,000 positions lost in October.

But colder-than-normal temperatures in November curbed hiring at construction sites and helped to sink mining payrolls.

The largest increase in payrolls since January pushed job growth well above its monthly average of 180,000 this year. Economists polled by Reuters had forecast payrolls rising by 180,000 jobs in November. The economy created 41,000 more jobs in September and October than previously estimated.

Even discounting the roughly 46,000 GM returnees, employment growth exceeded 200,000 jobs last month. The robust payroll gains suggest the Trump administration's 17-month trade war with China, which has plunged manufacturing into recession, has not yet spilled over to the broader economy.

Some economists said this could buy the Trump administration more time as it negotiates a "phase one" trade deal with China. Top White House economic adviser Larry Kudlow said on Friday the Dec. 15 deadline remained in place for a new round of U.S. tariffs on Chinese goods set to kick in, adding "there's no arbitrary deadline," on trade talks.

"The report alleviates pressure on the Trump administration to make a trade deal with China, giving negotiators more leverage to push for a harder line," said Daniel Zhao, a senior economist at Glassdoor in San Francisco.

The U.S.-China trade spat has bruised business confidence and undercut capital expenditure, tipping manufacturing into recession. The magnitude of last month's increase in payrolls is at odds with other labor market data.

Job openings are near a 1-1/2-year low, small business hiring intentions have softened relative to 2018 and the Institute for Supply Management survey's measure of factory employment has contracted for four straight months.

"While this morning's reading is a definite improvement, it does little to explain waning momentum over the past ten months," said Lindsey Piegza, chief economist at Stifel in Chicago. "It remains to be seen if such strength signals a turning point to more robust hiring patterns."

Though the labor market remains resilient despite the business investment downturn, hiring has slowed from last year's average monthly gain of 223,000 because of ebbing demand and a shortage of workers. The government has said it could cut job growth for the 12 months through March 2019 by at least 500,000 jobs when it publishes its annual revision next February.

Still, job creation is well over the roughly 100,000 jobs per month needed to keep up with growth in the working-age population. The unemployment rate fell one-tenth of a percentage point to 3.5% percent, matching September's reading, which was the lowest level since December 1969.

A broader measure of unemployment, which includes people who want to work but have given up searching and those working part-time because they cannot find full-time employment, fell to 6.9% from 7.0% in October. The labor force participation rate, or the proportion of working-age Americans who have a job or are looking for one, dipped to 63.2% in November from more than a six-year high of 63.3% in October.

Average hourly earnings rose seven cents, or 0.2%, after increasing 0.4% in October. In the 12 months through November, wages rose 3.1% after advancing 3.2% in October. Wages were held back by the concentration of hiring in low-paying industries.

Average hourly earnings for production and non-supervisory workers, considered a more reliable wage measure, increased 0.3% and were up 3.7% on a year-on-year basis in November.

The leisure and hospitality industry hired 45,000 workers. It has added 219,000 jobs over the last four months, with about two-thirds of the gains at restaurants and bars.

There were also increases in professional and business services, financial activities, and transportation and warehousing jobs last month. Government employment increased by 12,000 jobs.