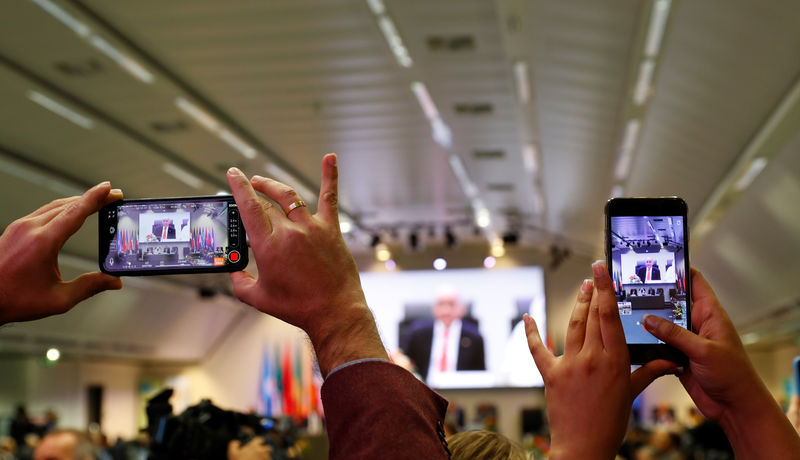 © Reuters. Journalists take pictures at the beginning of an OPEC and NON-OPEC meeting in Vienna

VIENNA (Reuters) - Saudi Arabia spearheaded a deal on Friday that will see the OPEC+ group of oil producers commit to some of the sector's deepest output cuts in a decade aiming to avert oversupply and support prices.

Saudi with OPEC peers and allies led by Russia backed a plan that could see cuts of as much as 2.1 million barrels per day (bpd), Saudi Energy Minister Prince Abdulaziz bin Salman said.

Brent oil rose 2% to more than $64 a barrel after the announcement.

"The Saudi goal was not necessarily to push oil prices significantly higher, but rather... to put a firm floor under them during the first quarter to temper any seasonal weakness," said Amrita Sen, co-founder of Energy Aspects.

OPEC+, which includes more than 20 producers, pump over 40% of the world's oil. They are taking action ahead of expected output increases next year by countries not participating in the cuts led by top producer the United States.

Producers will meet again in early March to decide their next move, Prince Abdulaziz told reporters at the conclusion of a meeting with OPEC+ producers, adding that there was "deep belief" their collaboration would continue.

"The jury is still out where will we be in March," he later told Reuters in an interview, when asked what level of supply the market will need then.

"It's the best outcome you could have expected. It puts a floor under prices at $60 Brent but (we're) still likely in a $60-65 Brent market until the global economy improves and then we could see $65 to $70 Brent in Q2," said Gary Ross, founder of Black Gold Investors.

OPEC+ will deepen cuts for the first three months of 2020, shorter than the six- or 12-month scenarios some OPEC members wanted.

OPEC's meeting on Thursday in Vienna to deliberate on policy and issues such as compliance with existing targets lasted more than five hours. The extended talks forced the cancellation of a news conference and gala dinner for delegates aboard a boat on the Danube.

Compliance has been a sticking point since the coordinated cuts began in 2017, which is why Saudi Arabia has been cutting more than required. Iraq and Nigeria are among those over-producing.

In his interview with Reuters, Prince Abdulaziz stressed the need for producers such as Iraq and Nigeria to improve their compliance with promised cuts.

Even if their compliance did not improve, however, he said Riyadh would not raise output unilaterally. Instead it would wait for consultations with OPEC+ in March.

"I won't take unilateral measures. I would still consult and review... It will be the group versus those who have not performed."

Eleven of OPEC's 14 member states are participating while Iran, Libya and Venezuela are exempt.

Saudi rival Iran, which Washington blamed for attacks on Saudi oil facilities in September, showed surprising support for Riyadh at the talks, delegate sources said. This was the first OPEC meeting since the attacks, which crippled the world's biggest oil processing facility.

Saudi Arabia needs to provide a floor for oil prices to support both its oil revenue - the source of almost 70% of its budget - and the pending stock market debut of state-owned oil giant Saudi Aramco.

Shares in Aramco are expected to begin trading this month in the world's biggest IPO.

Prince Abdulaziz told reporters he expected the company to be worth more than $2 trillion in a few months.