Home Tech Microsoft has a big year of hardware for 2020

Microsoft has a big year of hardware for 2020 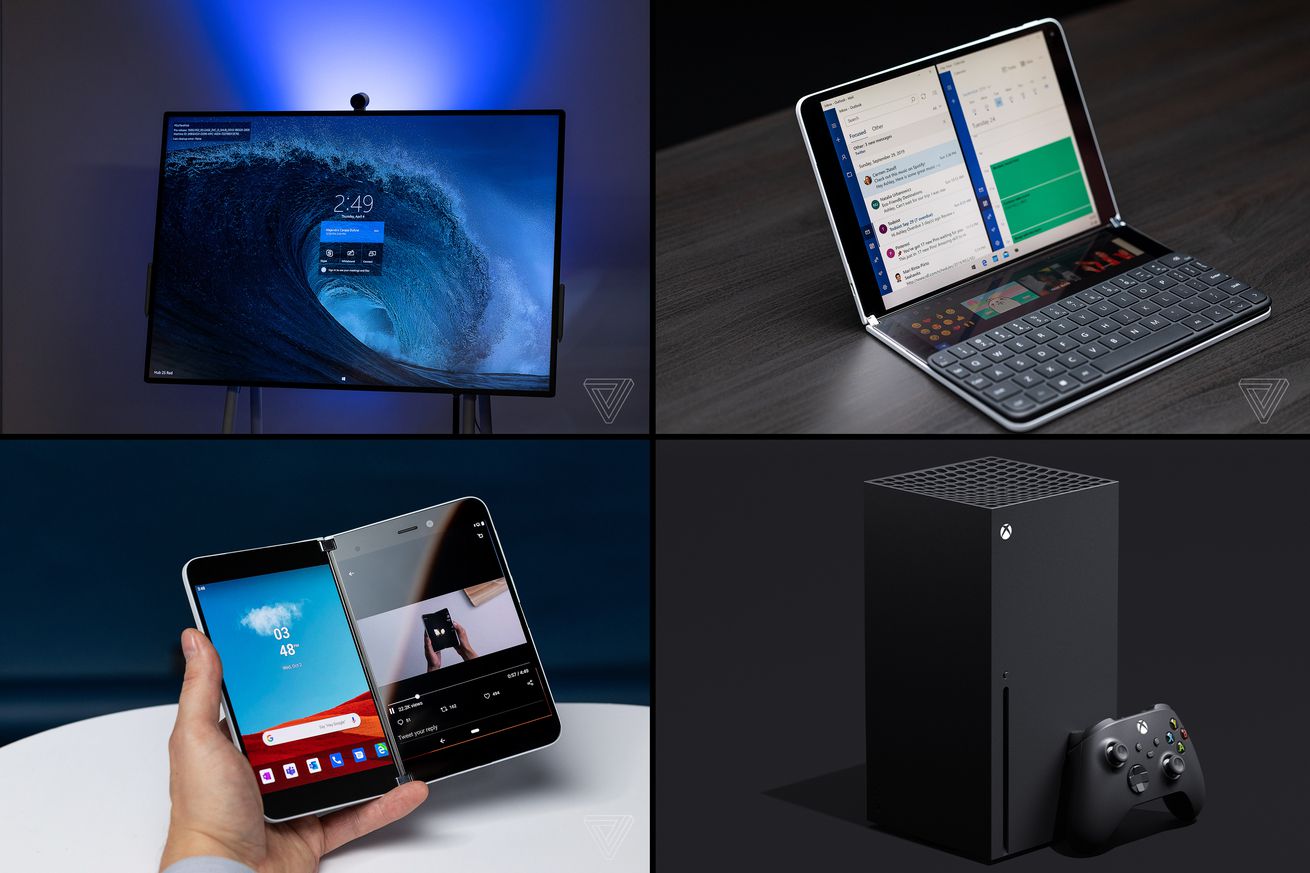 Microsoft’s surprise unveiling of its next Xbox Series X console last week underscores the company’s big hardware ambitions for 2020 and beyond. The Xbox Series X will debut during holiday 2020 alongside Microsoft’s already-announced Surface Duo and Surface Neo dual-screen devices and potentially even more holiday hardware.

Bizarrely, we’re heading into the new year already knowing most of Microsoft’s big hardware releases, but there’s bound to be even more. The Surface Book and Surface Go line of devices are both overdue refreshes, and there are rumors of Surface webcams and a modular Surface Studio. Here’s what to expect from Microsoft’s 2020 hardware.

Microsoft was originally supposed to release its new $249 Surface Earbuds in late 2019, but the company has delayed these to spring 2020 to make some improvements. It’s not clear exactly what Microsoft will be changing or whether the divisive design will be altered. The Surface Earbuds will now debut in the spring with a new white color, too.

The large circular earbuds are tuned for both music and voice performance. Microsoft is including dictation for use with Office apps, and it’s pitching these earbuds at both workers and consumers. Each earbud has two microphones built in, which aid in noise reduction when you’re using them for calls. Both of the earbuds also have touch areas that can be used with tap and swipe gestures to control music or other audio.

Microsoft released its Surface Hub 2S hardware this year, with a redesigned 50-inch display and lots of promises of future hardware and software upgrades. These promises come in the form of a Surface Hub 2X cartridge that will be available next year. It slots into the back of the Surface Hub 2 to upgrade the GPU and enable up to four of these displays to tile together. This upgrade cartridge holds the processor, RAM, and GPU inside — basically the entire computer, save for storage — so there could be additional upgrades once the cartridge is available.

This processor cartridge will also enable some of the more interesting software changes that Microsoft is making to this conference room device, including the ability to rotate the display. We’ve seen Microsoft demonstrate this display rotation, and it looks far smoother than what currently exists in Windows 10 today. Microsoft will also be using a more lightweight and modular version of Windows 10 alongside its cartridge upgrade, and we’re expecting it to look a lot more like the Windows 10X software that will be available on the Surface Neo.

Microsoft’s first Windows 10X device is set to debut during the holiday season in 2020. Surface Neo is one of two new dual-screen devices from Microsoft that are designed to improve mobile productivity. Surface Neo includes two separate 9-inch displays that fold out to a full 13-inch workspace running Windows 10X, a more simplified version that’s designed for dual-screen hardware.

The Surface Neo looks similar to Microsoft’s original Courier concept, and it’s about the same size as a Moleskine journal when it’s closed. It even has a clever Bluetooth keyboard that flips, slides, and locks into place with magnets. Microsoft also magnetically attaches its new Surface Slim Pen to the rear of the Surface Neo.

Microsoft has only mentioned holiday 2020 for the Surface Neo, and we still don’t know exactly how much this dual-screen device will cost. Other Windows 10X devices will also appear from Dell, HP, Lenovo, and Asus.

Microsoft also has a smaller dual-screen device ready for holiday 2020. The Surface Duo is essentially an Android Surface phone with two 5.6-inch displays that fold out into an 8.3-inch overall screen and it’s just 4.8mm thick. Microsoft surprised everyone with the adoption of Android, and the company is working with Google and others to improve the dual-screen experience for devices like Surface Duo.

Microsoft still has much more to demonstrate about the Surface Duo and Surface Neo, particularly around what apps will be available and the benefits they bring over regular smartphones or tablets. Microsoft showed off some examples of dragging and dropping content between apps and displays on the Duo, and the company has also hinted that you could use Project xCloud to have a game running on one side and a controller on the other.

We’re expecting to hear a lot more about Surface Neo and Duo on the software side in the spring. Microsoft is also holding its big developers conference, Build, in May where it will detail more about its plans for Windows 10X and Android dual-screen software.

Microsoft’s next-gen Xbox console will also debut in holiday 2020. Xbox Series X looks like a powerful miniature PC for the living room, and it will launch alongside Halo Infinite. Microsoft has opted for a tower cube design that will primarily sit vertically but can also be used horizontally. It also has some type of LED at the top, but Microsoft hasn’t revealed what this is used for just yet.

The Xbox Series X will include a custom-designed CPU based on AMD’s Zen 2 and Radeon RDNA architecture. Microsoft is also using an NVMe SSD on Xbox Series X, which promises to boost load times. Xbox Series X will also support 8K gaming, frame rates of up to 120 fps in games, ray tracing, and variable refresh rate support.

Microsoft is also promising “two times” the GPU performance of the Xbox One X with the new Xbox Series X. It’s still not clear exactly what hardware and specs are inside the Xbox Series X, but we’re expecting to hear a lot more about them in the spring. Microsoft will also unveil more next-gen games at the company’s E3 show in June, ahead of the Series X launch during holiday 2020.

Microsoft’s Surface Book line is well overdue for an upgrade, and 2020 is bound to deliver one. The Surface Book 2 launched in November 2017, a few months after the fifth-generation Surface Pro. Microsoft has since launched a Surface Pro 6 and Surface Pro 7 and released a 15-inch version of the Surface Laptop 3.

All this new hardware has left the Surface Book 2 looking and feeling a little dated, and some have wondered whether Microsoft will kill off the Book line in favor of the 15-inch Surface Laptop 3. Microsoft is still working on a Surface Book 3, and the company recently confirmed that it will continue to focus on the GPU in future versions. “Across the board, Surface Book laptops are GPU-heavy and I think in the future you’ll see us continue to do more of that,” explained Pavan Davuluri, a Microsoft Surface engineer, in an interview with The Verge earlier this year.

Microsoft also has another Surface that’s due for an upgrade for 2020: the Surface Go. Originally introduced in August 2018, the Surface Go is a smaller 10-inch version of the Surface Pro with a less powerful Intel Pentium Gold processor. Intel reportedly convinced Microsoft not to choose ARM for the Surface Go, but that might not be the case for a Surface Go 2 device.

Any potential Surface Go 2 is a candidate for Qualcomm’s range of ARM-based processors, especially considering Microsoft’s choice to use a custom SQ1 processor in the Surface Pro X this year. We’re expecting to see some type of refresh to the Surface Go in 2020, marking two years since the company released its miniature tablet.

2020 could also be the year that Microsoft returns to webcams for PCs. Reports had suggested Microsoft would release new webcams in 2019 for Windows 10 and even the Xbox One. These didn’t appear, but a 2020 release looks far more likely now. One of the rumored webcams is reportedly designed to bring Windows Hello facial recognition to any Windows 10 PC. The other will reportedly work with the Xbox One and bring back the Kinect feature that let users automatically sign in by moving in front of the camera.

Microsoft’s Surface chief, Panos Panay, previously hinted last year in an interview with The Verge that the company is considering Surface-branded webcams. “Look at the camera on Surface Hub 2, note it’s a USB-C-based camera, and the idea that we can bring a high fidelity camera to an experience, you can probably guess that’s going to happen,” hinted Panay in October 2018.

Panay also hinted at a modular Surface PC during this interview. Microsoft filed patents for a modular Surface Studio years ago, and we may eventually see the same modular design of the Surface Hub 2, that lets you replace the processor cartridge, come to the Surface Studio. 2020 could be a little early for such a move, but it’s unlikely that Microsoft will sit on its processor cartridge technology and not bring it to its all-in-one PC.

Microsoft also loves to surprise with its Surface hardware, as it did with the Surface Earbuds and Surface Duo. The company has been gradually expanding its Surface line beyond just tablets that transform into laptops, and 2020 is already taking Surface well beyond its roots. Perhaps there’s space for a few more surprises next year?