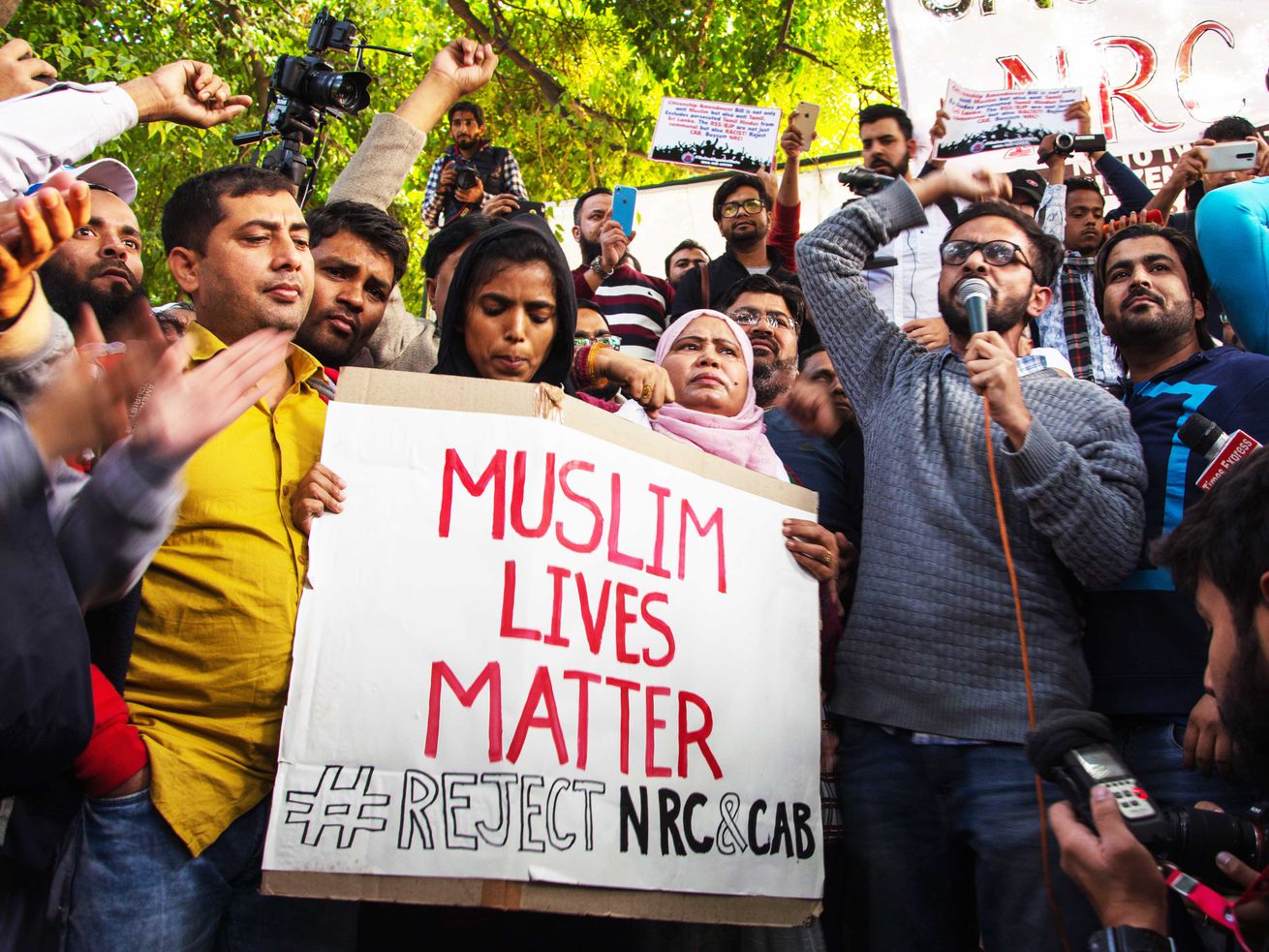 People protest against the Citizenship Amendment Bill — which allows Hindus from Afghanistan, Bangladesh, and Pakistan to get citizenship and exclude Muslims from the same countries — in New Delhi on December 7, 2019. | Javed Sultan/Anadolu Agency/Getty Images

At one university in New Delhi, police fired tear gas on students hiding in the library.

Protests — and violent police crackdowns on them — are in full swing in cities throughout India, set off by the passage ofa controversial new citizenship law. The law, which will fast-track citizenship for migrants from many religious minorities, but not for Muslims, is the latest measure the Indian government has taken to marginalize Muslims.

Police officers swept through a university campus in New Delhi on Sunday, injuring hundreds of student protesters and firing tear gas on those who had run into the library for safety. Videos show police beating students with batons. Some students have been shot, and dozens are hospitalized, though so far none of them have been reported killed.

Observers say the protest at Jamia Millia Islamia University, which has a majority-Muslim student body, began peacefully. But as police officers entered campus by force, some protesters reportedly threw stones at them. Buses and motorcycles were set on fire. Law enforcement stormed past the chaos and into buildings where other students were hiding.

“The police barged into the girls’ hostel, they barged into the boys’ hostel,” said one young woman. “Students were running around to save their lives. Is this democracy? Where are we living?”

Another young woman said police — yelling “sluts” and “traitors” — chased her and others as they ran to the library for shelter.

Amnesty International India is calling on the government to investigate allegations that police officers sexually harassed female students at the university.

Delhi, the nation’s capital, hadn’t seen anything quite like this in recent memory. In the wake of the unrest there, students in other parts of India also took to the streets in solidarity.At Aligarh Muslim University, southeast of Delhi, young demonstrators were also met with police violence. More than 60 were injured.

Protests have erupted in at least 17 cities, including Mumbai, Bhopal, Jaipur, Kolkata, Hyderabad, and Lucknow.

In the northeastern state of Assam, where all residents recently had to provide documents proving they are legal citizens or face the possibility of detention and deportation,police shot four people dead during demonstrations over the past few days.

This wave of protests represents one of the biggest challenges ever to confront Prime Minister Narendra Modi, who has sought to steer India toward a Hindu-nationalist (and anti-Muslim) course. Passing the new legislation, known as the Citizenship Amendment Bill (CAB), has been one of Modi’s main priorities. He claims its purpose is to protect persecuted minorities.

The CAB turns religion into a means of deciding whom to treat as an illegal immigrant — and whom to fast-track for citizenship. It says Hindus, Sikhs, Buddhists, Jains, Parsis, and Christians who came to India from Afghanistan, Bangladesh, and Pakistan won’t be treated as illegal. They’ll have a clear path to citizenship.

But one major group has been left out: Muslims, who number 200 million, or 14 percent of the Hindu-majority country. Under Modi, they are facing mounting threats to their status and safety.

Indian Muslims face the threat of detention camps and deportation

The CAB has many Muslims frightened in part because it’s closely linked with another contentious document: India’s National Register of Citizens (NRC).

The NRC is part of the government’s effort to identify and weed out people it claims are illegal immigrants in the northeastern state of Assam. India says many Muslims whose families originally came from neighboring Bangladesh are not rightful citizens, even though they’ve lived in Assam for decades.

When the NRC was published in August, around 2 million people — many of them Muslims, some of them Hindus — found that their names were not on it. They were told they had a limited time in which to prove that they are, in fact, citizens. Otherwise, they can be rounded up into massive new detention camps and, ultimately, deported.

So far, this measure affects potentially 2 million people, not all 200 million Muslims in India. However, Modi’s ruling Bharatiya Janata Party (BJP) has said it plans to extend the NRC process across the country.

The one-two punch of the NRC followed by the CAB could result in millions of newly stateless Muslims becoming refugees. The United Nations, Human Rights Watch, and the US Commission on International Religious Freedom have all warned that this could soon turn into a humanitarian disaster of horrifying proportions.

Some among the opposition parties to BJP and human rights advocates in India have called the CAB discriminatory and unconstitutional.

India’s Constitution guarantees everyone equality under the law. Religion is not a criterion for citizenship eligibility, a decision that goes all the way back to the 1940s, when India was founded as a secular state with special protections for minorities like Muslims.

Modi insists the CAB and NRC are not intended to target Muslims. On Monday, he implored Indians via Twitter to “maintain peace” and “stay away from any sort of rumor-mongering and falsehoods.” Yet at a rally the previous day, he noted that protesters “can be identified by their clothes,” which many interpreted as a dog whistle referring to Muslims.

Harsh Mander, a human rights advocate with Sikh heritage, wrote that the CAB represents “the gravest threat to India’s secular democratic Constitution since India became a republic.” He said he plans to register as a Muslim out of solidarity, and called on Indians to fight the CAB with a nationwide civil disobedience movement.

If the past few days of protests are any indication, that movement may be underway.

Sign up for the Future Perfect newsletter. Twice a week, you’ll get a roundup of ideas and solutions for tackling our biggest challenges: improving public health, decreasing human and animal suffering, easing catastrophic risks, and — to put it simply — getting better at doing good.