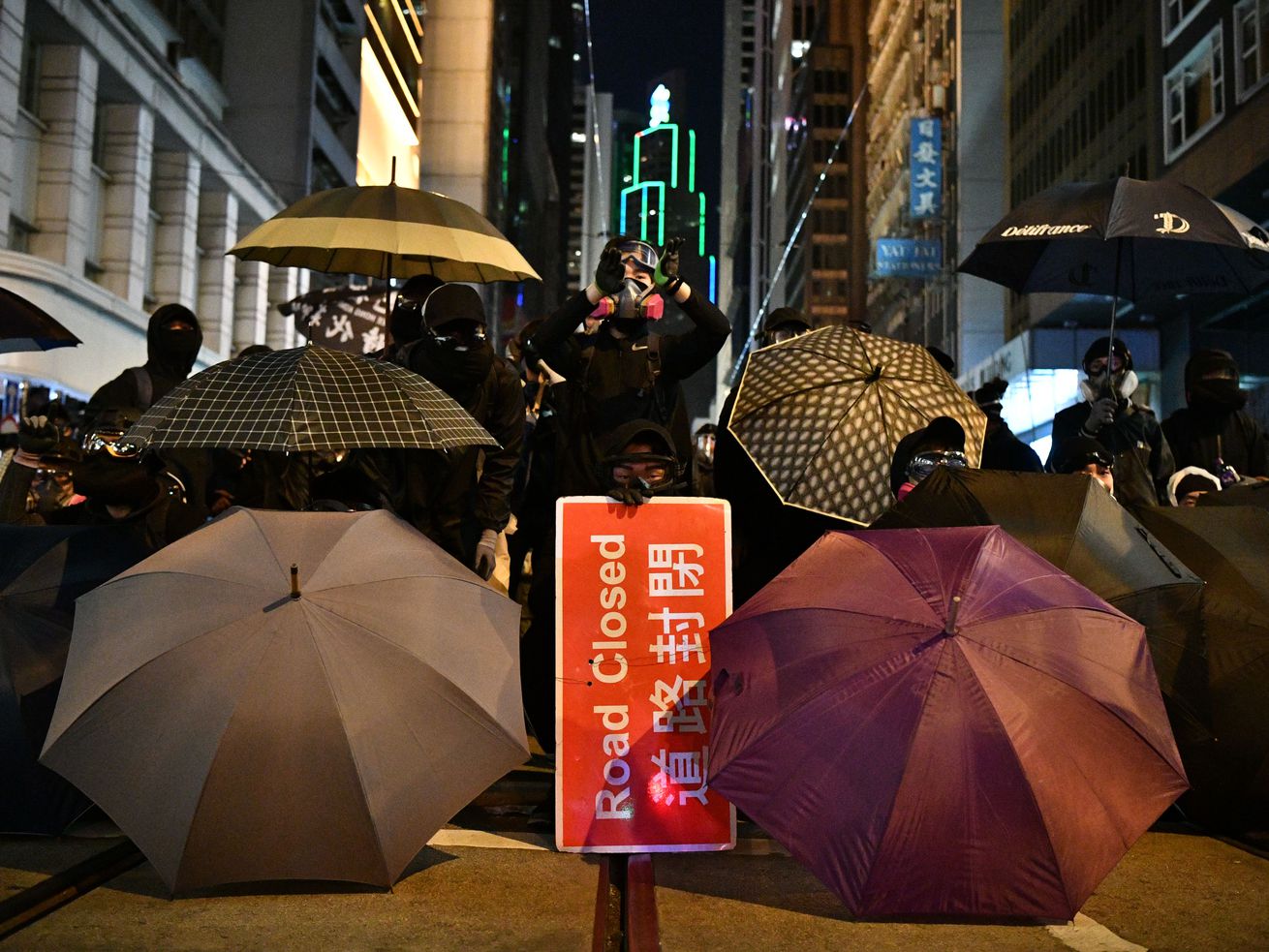 Protest groups say 800,000 people participated in pro-democracy demonstrations Sunday, the latest in a series of anti-government protests that began in June.

Hundreds of thousands of demonstrators filled the streets of Hong Kong on Sunday in one of the biggest displays of public protest the semi-autonomous territory has seen in months.

The size of the crowd suggested that the landslide victory of pro-democracy candidates in local elections two weeks ago has not satisfied the public’s concern about the territory’s pro-China leadership and lack of political autonomy.

Sunday’s action effectively took place on the six-month anniversary of the public protest that launched the current pro-democracy movement: a demonstration held in response to a controversial extradition bill, which would have allowed a person arrested in Hong Kong to face trial in mainland China. Those early protests have since evolved into calls for broader political freedoms and a demand that Hong Kong Chief Executive Carrie Lam resign.

The Civil Human Rights Front, a pro-democracy group, organized Sunday’s protest — the first protest by that group to receive police approval since August.

The group said the protest marked Lam’s “last chance” to accede to protester demands that include an independent investigation of police crackdowns on protesters, amnesty for arrested Hongkongers, and free elections.

“This march is also the biggest opportunity for Hongkongers to express their determination for democracy, and against police violence, to the international community, after the District Council elections and the passage of the Hong Kong Human Rights and Democracy Act,” the group said in a statement.

The Hong Kong Human Rights and Democracy Act is a measure US President Donald Trump recently signed into law that would make it difficult for Hong Kong to maintain its special trade status with the US should it fail to maintain a sufficient degree of autonomy from mainland China.

Sunday’s protesters, many of whom were dressed in all black, were largely peaceful. “Fight for freedom! Stand with Hong Kong!” rang out in the streets of the city.

Toward the end of the march, people held their cell phones above their heads to light up the sky, and sang anti-government songs.

Organizers estimated that about 800,000 people — more than 10 percent of the city’s population — turned out; Kong Kong police claimed there were 180,000 people in the streets.

Some protesters graffitied anti-Beijing messages onto a Bank of China building, and the Hong Kong police reported that some government buildings were struck by Molotov cocktails. March organizers condemned the attacks.

The day before the protests, the Hong Kong government said in a statement that it had “learned its lesson and will humbly listen to and accept criticism.”

That statement doesn’t mean, however, that Hong Kong’s officials will actually make the concessions the protesters are asking for.

Ultimately, the fundamental dynamics driving the protests from earlier this year are still at play: Many Hongkongers are deeply opposed to mainland China’s increasing and authoritarian control over local politics. But although it has special status, Hong Kong is currently a part of China, and Beijing ultimately gets final say on policy. And, it would appear that, if anything, the enormous international attention that these protests have generated has made Beijing more concerned than ever about giving people under its rule latitude to express themselves.

What the protesters want

While the protests in Hong Kong are largely leaderless, there are a few organizations that have sponsored demonstrations and that assist in disseminating information. One of these groups is the Civil Human Rights Front, which organized Sunday’s march, and that has helped organize many of the year’s other mass protests. The group has promised to keep up the marches until all of the protesters’ demands are met.

As Riley Beggin has explained for Vox, the protesters’ grievances and objectives have morphed over time:

The demonstrations began in early June as a challenge to legislation that would allow extradition to mainland China; critics feared the bill would allow Chinese officials to detain anyone seen as a threat.

Debate on the bill was postponed indefinitely due to the protests, but the demonstrations have continued as a platform for citizens to push back against what they call “police brutality” at the protests, Hong Kong Chief Executive Carrie Lam’s dismissal of protesters as rioters and “stubborn children,” and Beijing’s growing influence in the city’s politics.

In October, Lam officially scrapped the extradition bill, but that didn’t slow protests, which had by that point evolved into a full-blown pro-democracy movement.

Although the bill is now off the table, protesters still demanding other reforms, as Vox’s Jen Kirby has explained, including: that arrested protesters be given amnesty, that the government retract its claim the protests are riots (as rioting is a criminal offense in Hong Kong punishable by up to 10 years in prison), and that the conduct of the police during the protests receive independent review.

Police crackdowns on the demonstrations have varied in intensity over the last six months, and have included violent showdowns with protesters, which have strained the relationship between police and protesters. Nearly 6,000 people have been arrested since protests began.

In addition to their demands around criminal justice, protesters also are calling for citizens to be given universal suffrage.

The key question here is whether Hong Kong’s government and its population can come to an understanding or compromise on Beijing’s influence over Hong Kong’s political affairs. As Rachel Withers has explained for Vox, historically Hong Kong has a unique degree of freedom from Beijing’s government, and Hongkongers are reluctant to give that up:

While Hong Kong is technically under the control of the People’s Republic of China, under the terms of the 1997 handover of power from the UK to China, the city is supposed to be allowed to govern itself until 2047 under a policy known as “one country, two systems.” Essentially, this means that while Hong Kong is under Chinese sovereignty, it is supposed to be free to retain its own political and legal systems. However, Beijing has been pressuring Hong Kong’s leaders to pass laws that bring it more closely in line with the Chinese government, including this recent extradition law, which is sponsored by the pro-Beijing government.

Many in Hong Kong fear the changes to come, particularly as 2047 draws near.

In the last week of November, Hongkongers took their grievances to the ballot box. As Vox’s Jen Kirby reported at the time, the results of the district council elections expressed a clear rebuke of Beijing’s attempts to control Hong Kong:

The results undermined Beijing’s narrative that the protests represented fringe opinions, and that there was a silent majority in Hong Kong that approved of mainland China’s increasing influence over the territory.

“The silent majority is more of a metaphor than a real group of people,” Samson Yuen, an assistant politics professor at Lingnan University, told the Atlantic following the election. “The voting results tell us it doesn’t exist.”

As Vox’s Kirby explained, the district council elections became an unexpected way for way for Hongkongers to register their dissatisfaction with the direction of the city’s political life:

[T]he district council elections are one of the few elections in Hong Kong that are almost fully democratic.

That’s not the case for the Legislative Council, the body that governs the entire territory, which is only partially directly elected, or for Hong Kong’s chief executive, Carrie Lam, who was chosen by a 1,200-person committee that’s largely skewed to favor pro-Beijing candidates.

At the same time, Hong Kong’s councils don’t have a ton of power outside of individual districts; they’re mostly focused on neighborhood and quality of life issues. And usually, that’s what candidates run on.

But not so much this year, where the months-long protests colored the contest and turned it into another battleground for the future of Hong Kong.

But it’s apparent that hundreds of thousands of Hongkongers are still hungry for fundamental change — they want a more of a say in who represents them on the Legislative Council, and they want Carrie Lam out of office.

And the protesters have made it clear they plan to continue to demonstrate: “I will fight for freedom until I die,” one mother told Reuters. As long as they keep showing up in the streets, it’s unlikely that their concerns will fade from international attention.