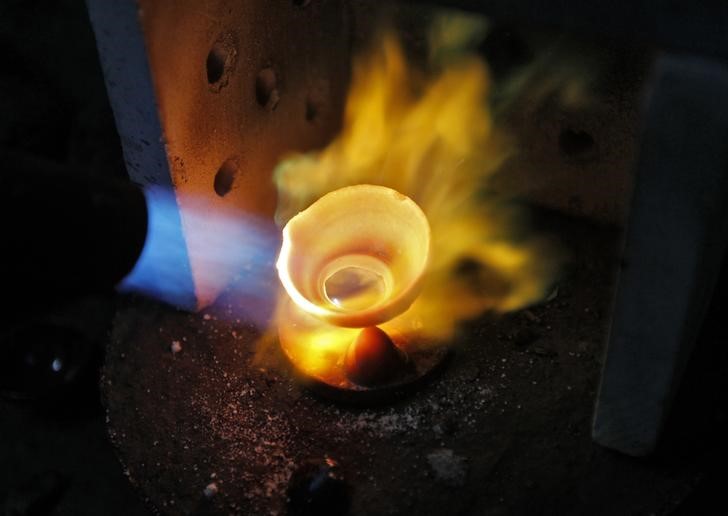 Investing.com -- Gold prices edged higher in early trading in New York on Thursday but were unable to break out of an increasingly narrow range as the market waits to see whether President Donald Trump will carry out his threat to escalate the trade war with China.

Trump is due to meet with Treasury Secretary Steven Mnuchin and senior trade advisors later Thursday, in a meeting that will likely decide whether to proceed with the scheduled 15% import tariff on all remaining imports from China that haven’t already been hit.

The tariffs would affect some $160 billion worth of imports annually, including many popular consumer goods. To the extent that price rises are passed on to final consumers, the tariffs may have a bigger impact on U.S. consumers than previous rounds. However, reports have suggested that Trump may consider exemptions for certain products, including Apple’s iPhones.

Given that there is no sign of even a partial agreement with China on trade in the near future, the meeting boils down to a decision on whether to press ahead or to delay the measures.

Silver futures rose 0.6% to $16.94 an ounce, while platinum rose 0.6% to $944.45, with the disruption of mine production in South Africa from blackouts keeping it close to a one-month high.

Prices were supported by comments from Fed chairman Jerome Powell that the central bank will wait for a rise in inflation that is both “significant” and “persistent” before raising interest rates. However, that degree of dovishness wasn’t enough to lift prices out of a downward trend in evidence since September.

“With no change in the quarter's Summary of Economic Projections for the long-term rate, combined with no rate hikes foreseen through 2021, and no hint from Chair Powell's statement, the market can conclude that policy will remain accommodative for the time being,” Bank of New York FX and macro strategist John Vella said in a research note.

Elsewhere on Thursday, the central bank of Turkey kept the global trend toward easier monetary policy intact with a 200 basis point interest rate cut. The Brazilian central bank had cut its key rate to a new record low on Wednesday and left the prospect of further cuts open.

By contrast, the European Central Bank is expected not to signal any change in policy at its council meeting on Thursday.