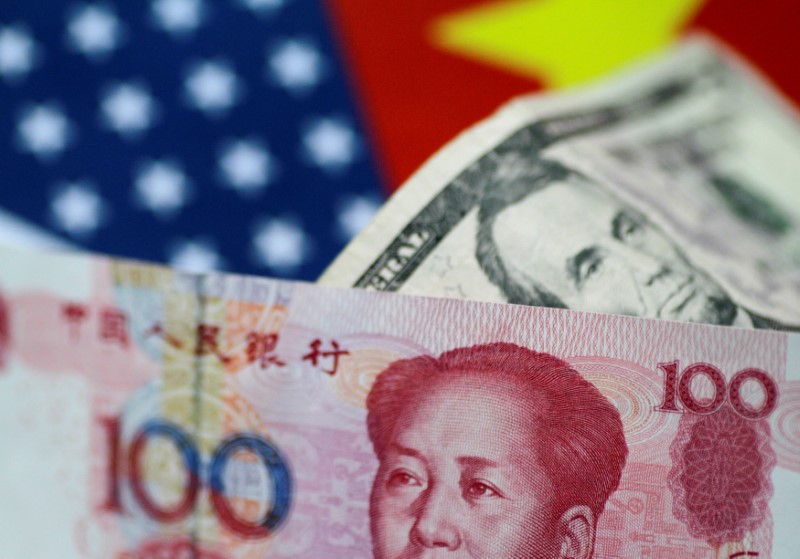 Investing.com - The Chinese yuan and the U.S. dollar both fell on Monday in Asia as the trade deal roller-coaster ride continued.

The USD/CNY pair gained 0.2% to 6.9979. In an interview with CBS News on Sunday, U.S. Trade Representative Robert Lighthizersaid the phase one U.S.-China trade deal is “totally done.”

Under the deal, U.S. President Donald Trump vowed not to pursue a new round of tariffs set for Sunday. In return, Beijing said it would substantially increase agricultural purchases, although it did not specify how much.

While Trump said on Twitter that "phase two" trade talks would start immediately, Beijing made it clear that moving to the next stage of the trade negotiations would depend on implementing phase one first.

Lighthizer also said there is no timetable set for the next phase of talks.

Meanwhile, Investors will pay attention to remarks from several Fed officials in the coming days after the Fed decided to hold rates steady last week.

Dallas Fed President Robert Kaplan, New York Fed President John Williams and Eric Rosengren of the Boston Fed are all due to speak on Tuesday, while Chicago Fed President Charles Evans is scheduled to speak a day later.

On the data front, updates on U.S. industrial production, housing, consumer sentiment, personal income and spending are all due this week.

In China, industrial production and retail sales data beat estimates, suggesting the economic may be stabilizing.

Meanwhile, the AUD/USD pair and the NZD/USD pair both slipped 0.1%.