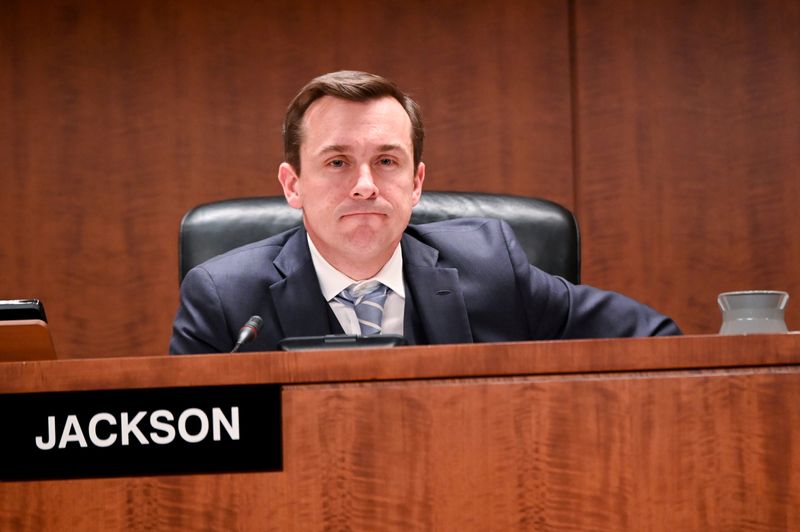 © Reuters. FILE PHOTO: Commissioner Jackson participates in a U.S Securities and Exchange Commission open meeting to propose changing its definition of an "accredited investor" in Washington

WASHINGTON (Reuters) - The White House is expected to nominate Caroline Crenshaw, a Democratic attorney at the U.S. Securities and Exchange Commission, to fill an SEC seat being vacated next year by Democratic Commissioner Robert Jackson, according to three people with direct knowledge of the matter.

Crenshaw currently works as an attorney in Jackson's office. Senate Democratic Leader Chuck Schumer has sent Crenshaw's name to the White House as a nominee for the post, the sources said.

She has been employed at the SEC since 2013, according to her LinkedIn (NYSE:LNKD) profile, and is a judge advocate in the U.S. Army Judge Advocate General's Corps. She previously worked under another Democratic commissioner, Kara Stein, who left in January.

Jackson, an independent who was picked by the Democrats to fill an open Democratic seat in January 2018, is expected to leave the agency next year after his term expired in June. Commissioners can continue to serve for 18 months after their term expires and before a replacement is confirmed by the Senate.

Schumer recommended Crenshaw for the role after ruling out other candidates for consideration. While the White House is ultimately responsible for filling such posts, presidents traditionally defer to the leaders of the opposition party in filling those party's roles.

The SEC is led by a bipartisan commission that includes a chair, two Democrats and two Republicans.

The White House must officially make the nomination of an SEC commissioner before the pick's required confirmation by the Senate, a process that can take months. It was not clear when Crenshaw would be formally nominated.